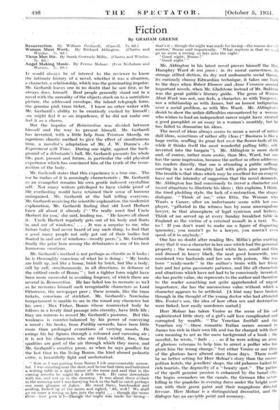 By GRAHAM GREENE IT would always be of interest to the reviewer to know the intimate history of a novel, whether it was a situation, a character, a relationship, which was the germinating impulse. Mr. Gerhardi leaves one in no doubt that he saw first, as he always does, himself. Real' people generally stand out in a novel with the unreality of the objects stuck on to a surrealiste picture, the addressed envelope, the inland telegraph form, the genuine pink tram ticket. I know no other writer with • Mr. Gerhardi's ability to be creatively excited by himself ;

But the impulse of Rtherrection was divided between himself and the way to present himself. Mr. Gerhardi has invented, with a little help from Tristram Shandy, an ingenious chaotic method to- give the effect of simultaneous time, a novelist's adaptation of Mr. J. W. Dunne's An Experiment with Time. During one night, against the back- ground of a debutante's ball, Mr. Gerhardi presents his whole life, past, present and future, in particular the odd-physical experience which has convinced him of the truth of the resur-

rection of the body.

Mr. Gerhardi states that this experience is a true one. The use he makes of it is amusingly characteristic ; Mr. Gerhardi as an evangelist, remains his own gentle indecent crystalline self. Not many writers privileged to have visible proof of life everlasting would have retained their sense of humour unimpaired. Mr. Gerhardi at the ball telling everyone, Mr. Gerhardi receiving the scientific explanation, the modernist explanation, Mr. Gerhardi finding that old Lord Herbert knew all about it already (" ' We really must find Uncle Herbert for you,' she said, leading me. ' He knows all about it. Uncle Herbert regularly gets out of his body and floats in and out of windows.' . . . It was a surprise to me, who before today had never heard of any such thing, to find that a good many people not only got out of their bodies but floated in and out of windows—mostly peers."), Mr. Gerhardi finally the prize bore among the débutantes is one of his best humorous creations.

Mr. Gerhardi's method is not perhaps as chaotic as it looks ; he is thoroughly conscious of what he is doing : " My books , are built up, not like a house, brick by brick, but like a body, cell by cell, simultaneously, in all directions, in defiance of

the critical credo of Bonzo " ; but a tighter form might have been more successful in avoiding longeurs, of which there are several in Resurrection. He has failed too to recreate as well

as he recreates himself such recognizable characters as Lord Ottereove, the newspaper peer ; these remain, like the tram , tickets, conscious of stickfast. Mr. Gerhardi's Narcissine temperament is unable to see in the round any character but his own ; Max Fisher, Bonzo whose resurrected body he

follows in a lovely final passage into eternity, have little life ; they arc mirrors to record Mr. Gerhardi's postures. But this weakness is counter-balanced by his power of conveying a mood ; his books, from Futility onwards, have been little more than prolonged evocations of varying moods. Be swings his lay figures through a coloured and caressing. air ; it is not his characters who are tired, wistful, free, thoSe qualities are part of the air through which they move; and Mr. Gerhardf s emotive prose, as when he says goodbye for

the last time to the living Bonzo, the kind abSurd pedantic critic, is beautifully light and unrhetorical.

" Now as I was parting from Bonze I felt unaccountably sorrow- ful. I was standing near the door, and he too had risen and indicated . a writing table in a dark corner of the room and said that in the coming months he might do a little work. He came downstairs ; with me, and out on to the doorstep. It was about three &clock in the morning and I was hurrying back to the ball to catch perhaps I one more glimpse of Juliet. He stood thera, bareheaded : and smiling, looked up at the moon and sighed, Ali, well ! We shall • go no more a roving so late into, the night though the-niocin goes it I—Troiighthe-iliglit-Was niaile for- lOOng- that's it : though the night was made for loving—the reason doe,o't matter,' Bonzo said impatiently. What matters is that we go no more a roving, so late into the night.'

Mr. Aldingf on in his latest novel proves himself the Mrs. Humphry Ward de nos jours ; in its moral earnestness, its ' strange stilted diction, its dry and undramatic social theme, its curiously clumsy Edwardian technique, it takes one back to the days when Robert Elsmere and Anne Veronica seemed important novels, when Mr. Gladstone instead of Mr. Baldwin was the great public's literary guide. The germ of Women Must Work was not, one feels, a character, as with Turgenev,

nor a relationship as with James, but an honest indignation over a social problem, as with Mrs. Ward. Mr. Aldington desire to show the unfair difficulties encountered by a woman who wishes to lead an independent career might have created a good pamphlet or an essay in a woman's monthly, but he - has failed to dramatize his ideas.

The novel of ideas always seems to mean a novel of rather dull ideas, sometimes of rather silly ideas (" Business is like a huge cretin, scuffing its great feet over the flower-beds of life while it thinks itself the most wonderful puffing billy, self- invented into the bargain "). Mr. Aldington is more shrill

his readers directly, that one is attending a public suffrage meeting in a vast draughty hall with pitch pine panelling.

The trouble is that ideas which may be excellent for an essayist have not the intensity of suggestion that the novel demands.

Mr. Aldington has had consciously to invent a character and invent situations to illustrate his ideas ; this explains, I think,

the tired plodding style, the lack of construction, the stagey dialogue. " Think of me," cries Etta, the Woman who Wants a Career, after an unfortunate scene with her em- ployer, "pilloried in the witness box by some unscrupulous lawyer, in that atmosphere of legal cynicism and lechery.

Think of me served up at every Sunday breakfast table in England as the victim of a criminal assault in a taxi. No,

no ! If you don't want to make me a figure of disgusting ignominy, you mustn't go to a lawyer, you mustn't even speak of it to anybody."

One has no doubt after reading Mrs. Millin's grim exciting story that it was a character in her case which had the germinal property the woman with lined white face, small and thin and dressed in heavy black, the neat good housewife, who

murdered. two husbands and her son with poison. She was born " ready-made "ui the author's brain with her frizzy hair and her prim passionate patience, and like all characters

and situations which have not had to be consciously invented, she has poetic value, she represents to the author and therefore to the reader something not quite apprehended of urgent importance, she has the unconscious value without which a character appears to be artificial. [A hint may have broken through in the thought of the young doctor who had attended Mrs. Foster's son, the idea of how often sex and destruction were linked, how easily murderers mated.]

Herr Molnar has taken Venice as the scene of his sad sophisticated little story of a girl's calf love complicated and corrupted by wealth. " The Venetian footfall and the Venetian cry "—these romantic Italian scenes seemed to James too rich in their own life, and too far charged with their own meaning to act as the mere background of' a book ; the novelist, he wrote, feels . . . as if he were asking an army of glorious veterans to help him to arrest a pedlar who has given him the wrong change," but either Venice or our ideas of the glorious have altered since those days. There could be no better setting for Herr Molnar's story than the cosmo- politan hotels, the jewellers' shops, the old palazzos baited for rich tourists, the depravity of a "beauty spot." The pathos of the spoilt genuine passion is enhanced by the banal city, the bogus serenaders on the canals, the German film actors lolling in the gondolas in evening dress under the bright noon

sun with their green: paint and their megaphone directed fervour. Herr Molnar is a distinguished dramatist, and the dialogue has an enviable point and economy.