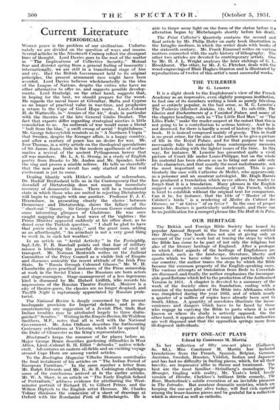 It is a slight shock to the Englishman's view of the French Academy as an impressiVe, even slightly pompous institution,: to find one of its members writing a book so purely frivolous and so entirely popular, in the bad sense, as M. G. Lenotre's The Tuileries (Herbert Jenkins, 12s. 6d.). Its sub-title, The Glories and Enchantments of a Vanished Palace, and manv of the chapter headings, such as "The Little Red Man" or "The Lilies Fade," make the reader suspect at the outset that-this is not going to be a contribution to serious history. And he is. not deceived, for there is hardly a word of history in the whole book. It is instead composed mainly of gossip. This in itself is no great crime, for the aim of the author is to give a pictuie of life in the Royal Palace, and for that purpose he must necessarily take his materials from contemporary memoirs: and letters dealing with the lighter issues of the time. In th4 way, for instance, M. Lenotre has presented quite a vividi picture of Court-life under Louis-Philippe; but on the whole his material has been chosen so as to bring out one side only of his characters, and that usually the most melodramatic, not the most important or the most relevant. This is par- ticularly the case with Catherine de Medici, wh6 appears-only; as a poisoner and an amateur astrologist. Mr. Hugh Barnes has produced a translation which never allows the reader to forget- that it is a translation. Many phrases in the English suggest a complete misunderstanding of the French, which is hard to establish without the Original text for comparison. Can it be, for instance, that the title of " Master of the Cabinet's birds " is a rendering Of Maitre du Cabinet des Oiseaux, or " at Greve " of en Greve? In the case of proper names Mr. Barnes is 'particularly unfo-itunate, and there can be no justification for a mongrel phrase like The Hall de fa Pair.