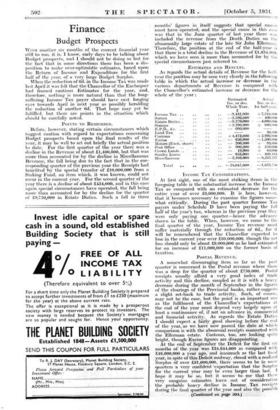 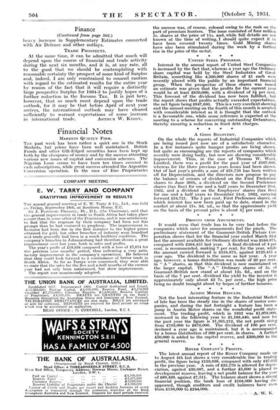 NVira another six months of the current financial year still to run, it is, I know, early days to be talking about Budget prospects, and I should not be doing so but for the fact that in some directions there has been a dis- position to make over-optimistic estimates, based upon the Return of Income and • Expenditure for the first half of the year, of a very large Budget Surplus. When the reduction of 6d. in the Income Tax was made last April it was felt that the Chancellor of the Exchequer had framed cautious Estimates for the year, and, therefore, nothing is more natural than that the long- suffering Income Tax payer should have cast longing eyes towards April in next year as possibly heralding the reduction of another 6d. That hope may yet be fulfilled, but there are points in the situation which should be carefully noted.

Before, however, stating certain circumstances which suggest caution with regard to expectations concerning Budget prospects based upon the final results of the year, it may be well to set out briefly the actual position to date. For the first quarter of the year there was a decline in the Revenue of about £1,400,000, but that Was more than accounted for by the decline in Miscellaneous Revenue, the fall being due to the fact that in the cor- responding quarter of the previous year the Receipts had benefited by the special transfer of £10,000,000 from a Sinking Fund, an item which, it was known, could not recur in the current year. For the second quarter of the year there is a decline of about £454,000, and in this case again special circumstances have operated, the fall being more than accounted for by the decline for the quarter of L9,750,000 in Estate Duties. Such a fall in three .months' figures in itself suggests that special causes must have operated; and the special cause in this ca,e was that in the. June quarter of last year there was included the revenue from the Death Duties on the Abnormally large estate of the late Sir Sohn Ellerman. Therefore, the position at the end of the half-year is that there is a total decline in the Revenue of £1,854,000, which we .have seen is more than accounted for by the Special circumstances just referred to.

At first sight, one of the most striking items in the foregoing table is the substantial increase in the Income 'Tax as compared with an estimated decrease for the entire year of over 19,000,000; It is here, however, that it becomes necessary to examine the figures some- what critically. During the past quarter Income Tax payers under Schedule D have been paying the full half of the year's tax, whereas in the previous year they were only paying one quarter—hence the advance shown in the table. 'When, however, we come to the final quarter of the year, Income Tax revenue must suffer materially through the reduction of 6d., for it will be remembered that the Chancellor expected to lose in the current year over £20,000,000, though the net loss should only be about £9,000,000 as he had estimated for an increase of £11,000,000 on the former basis of taxation.

A somewhat discouraging item so far as the past quarter is concerned is the Postal revenue where there was a drop for the quarter of about £750,000. Postal receipts usually afford a very good index of trade activity and this decline, coupled as it is with a heavy decrease during the month of September in the figures of the clearings of the Provincial banks, rather suggests a slight set-back to trade activity. Such, of course, may not be the case, but the point is an important one as the fulfilment of the Chancellor's expectations at the end of the year must depend very largely upon at least a continuance of, if not an advance in, commercial and financial activity. As regards the Estate -Duties I should expect a fairly, good showing before the end of the year, as we have now passed the date at which comparison is with the abnormal receipts connected with the Ellerman estate. Customs, too, are looking quite bright, though Excise figures are disappointing. At the erid - of September the Deficit for the first six months of the. year was £54,644,000 as compared with £48,600,000 a year ago, and inasmuch as the last fiscal year,.in spite of this Deficit midway, closed with a realized Surplus of over £31,000,000, there seems to be in some quarters -a very confident -expectation that the Surplus for the current year may be even larger than last. I hope it may be so, but it seems- to me that these very sanguine estimates leave out of consideration the probable heavy decline in Income Tax receipts during the final quarter of the_year and also the possible (Continued on page 504.) _

heavy increase in Supplementary Estimates connected with Air Defence and other outlays.

At the same time, it can be admitted that much will depend upon the course of financial and trade activity during the next six months, and it is, at any rate, all to the good that we should be contemplating with reasonable certainty the prospect of some kind of Surplus and, indeed, I am only constrained to counsel caution with regard to the estimated results for the entire year by reason of the fact that it will require a distinctly large prospective Surplus for 1934-5 to justify hopes of a further reduction in the Income Tax. It is just here, however, that so much must depend upon the trade outlook, for it may be that before April of next year arrives, the international outlook may have cleared sufficiently to warrant expectations of some. increase