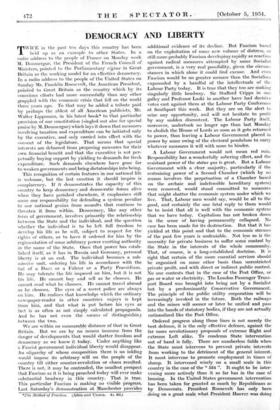 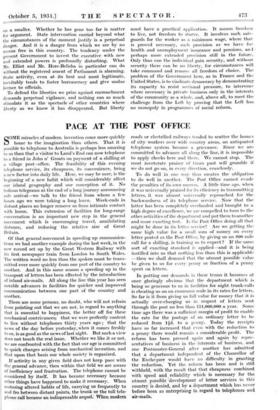 TWICE in the past ten days this country has been held up as an example to other States. In a radio address to the people of France on Monday week M. Doinnergue, the President of the French Council of Ministers, pointed to the Parliamentary regime in Great Britain as the working model for an effective democracy. In a radio address to the people of the United States on Sunday Mr. Franklin Roosevelt, the American President, pointed to Great Britain as the country which by. its conscious efforts had more successfully than any other grappled with the economic crisis that fell on the world three years ago. To that may be added a tribute paid by perhaps the ablest of all American publicists, Mr.

Walter Lippmann, in his latest book* to that particular provision of our constitution (singled out also for special praise by M. Doumergue) which lays it down that measures involving taxation and expenditure can be initiated only by the executive, and only carried into effect with the consent of the legislature. That means that special interests are debarred from proposing measures for their own financial benefit and that the executive is not per- petually buying support by yielding to demands for fresh expenditure. Such demands elsewhere have gone far to weaken governments and bring dictatorships into being. This recognition of certain features in our national life is welcome, but the last emotion it should inspire is complacency. If it demonstrates the capacity of this country to keep democracy and democratic forms alive when they have perished elsewhere, it emphasizes still more our responsibility for defending a system peculiar to our national genius from assaults that continue to threaten it from within. Democracy, like any other form of government, involves primarily the relationship between the State and the individual, and the question whether the individual is to be left full freedom to develop his life as he will, subject to respect for the rights of others, or to have it ordered for him by the regimentation of some arbitrary power exerting authority in the name of the State. Once that power has estab- lished itself, as it has in Russia and Germany, personal liberty is at an end. The individual becomes a sub- missive unit, ordering his life in accordance with the fiat of a Duce or a Fiihrer or a Party Praesidium.

He may tolerate the life imposed on him, but it is not his life. He cannot buy and sell as he chooses. He cannot read what he chooses. He cannot travel abroad as he chooses. The eyes of a secret police are always on him. He realizes that knowledge which the ordinary newspaper-reader in other countries enjoys is kept from hini, and that what is- put before his eyes as fact is as often as not simply calculated propaganda. And he has not even the means of distinguishing between the two.

We are within no measurable distance of that in Great Britain. But we are by no means immune from the danger of developments that would shatter freedom and democracy as we know it today. Under anything like a Fascist government individual liberty would disappear. An oligarchy of whose composition there is no inkling would impose its arbitrary will on the people of the country till either counter-revolution or chaos :resulted. There is not, it may be contended, the smallest prospect that Fascism as it is being preached today will ever make substantial headway in this country. That is true. This particular Fascism is making no visible progress. - Last Saturday's demonstration at Manchester provides • The Method of Freedom. (Allen and Unwin. 4.s. ed.) additional evidence of its decline. But Fascism based on the exploitation of some new volume of distress, or still more probably Fascism developing rapidly as reaction against radical measures attempted by some Socialist government, is a very real possibility, given the circum- stances in which alone it could find excuse: . And even Fascism would be no greater menace than the Socialism expounded by a handful of the intellectuals of the Labour Party today. It is true that they too are making singularly . little headway. Sir Stafford Cripps in one galley and Professor Laski in another have had decisive votes cast against them at the Labour Party Conference at Southport this week. But they are on the alert to seize any opportunity, and will not hesitate to profit by any sudden discontent. The Labour Party itself, moreover, undertook no longer ago than last Monday to abolish the House of Lords as soon as it gets returned to power, thus leaving a Labour Government placed in power by some swing of the electoral pendulum to carry whatever measures it will with none to hinder.

A Labour Government would not mean red ruin. Responsibility has a wonderfully sobering effect, and the resistant power of the status quo is great. But a Labour Government with a clear majority, particularly if the restraining power of a Second Chamber (which by no means involves the perpetuation of a Chamber based on the archaic and indefensible hereditary system) were removed, would stand committed to measures .that might shatter the economic system under which we live. That, Labour men would say, would be all to the good, and certainly the one fatal reply to them would be to insist that all is well with the economic system that we have today. Capitalism his not broken down in the sense of having permanently collapsed. No case has been made for its destruction. But that it has yielded at this point and that to the economic stresses of the past few years is undeniable. Not less so is the necessity for private business to suffer some control by the State in the interests of the whole community. That, of course, is a long-established doctrine. It is right that certain of the more essential services should be organized on some other basis than unrestricted private profit, and with direct or indirect public control. No one contests that in the case of the Post Office, or gas or water or electricity. The London Passenger Trans- port Board was brought into being not by a Socialist but by a predominantly Conservative Government. The principle of the public utility corporation will. be increasingly invoked in the future. Both the railways and the mines will sooner or later be unified and . pass into the hands of statutory bodies, if they are not actually nationalized like the Post Office.

Ordered progress along those lines is not merely the best defence, it is the only effective defence, against the far more revolutionary proposals of extreme Right and extreme Left alike. To condemn State intervention out of hand is folly. There are numberless fields when the State must intervene to prevent private interests from working to the detriment of the general interest. It must intervene to promote employment in times of slump. It intervened wisely, on a small scale in this country in the case of the " 584 ". It ought to be inter- vening more actively than it so far has in the case of housing. In the United States government intervention has been taken for granted as much by Republicans as by Democrats. President Roosevelt has only . been doing on a great scale what President Hoover. was doing on a smaller. Whether he has gone too far is matter for argument. State intervention carried beyond what • the circumstances of the moment justify is a perpetual danger. And it is a danger from which we are by no means free in this country. The tendency under the present Government to invest the executive with new and extended powers is profoundly disturbing. What Mr. Elliot and Mr. Hore-Belisha in particular can do without the registered assent of Parliament is alarming. State activity, even at- its best and most legitimate, inevitably tends to foster bureaucracy and give undue licence, to officials.

To defend the liberties we prize against encroachment demands perpetual vigilance, and nothing can so much stimulate it as the spectacle of other countries where liberty as we know it has disappeared. But liberty must have a practical application. It means freedo:n to live, not freedom to starve. It involves such safe- guards for the worker as a minimum wage, where that is proved necessary, such provision as we have for . health and unemployment insurance and pensions, ani perhaps more extended provision still in the future. Only thus can the individual gain security, and without security there can be no liberty, for circumstances will take command and remove all freedom of choice. The problem of the Government here, as in France and the United States, is to vindicate democracy by demonstrating- its capacity to resist sectional pressure, to intervene where necessary in private business only in the interests of the community as a whole, and, above all, to meet the challenge from the Left by proving that the Left has no monopoly in programmes of social reform.