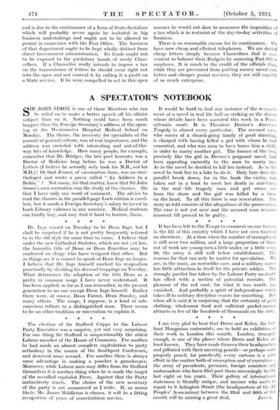 A SPECTATOR'S NOTEBOOK S IR JOHN SIMON is one of those

Ministers who can be relied on to make a better speech off his official subject than on it. Nothing could have been much happier than the Foreign Secretary's address at the open- ing of the Westminster Hospital Medical School on Monday. - The theme, the necessity for specialists of the pursuit of general culture, was of real importance, and the address was crowded with interesting and out-of-the- way bits of knowledge. How many people, for example, remember that Dr. Bridges, the late poet laureate, was a 'Doctor of Medicine long before he was a Doctor of Letters (I believe he actually only took his M.B., not his ALD.)? Or that Jemier, of vaccination fame, was an orni- thologist and wrote a poem called " An Address to a Robin " ? Not many, for that matter, knew that Sir John Simon's own recreation was the study of the classics. On that I have only one word of comment. The advice to read the classics in the parallel-page Loeb edition is excel- lent, but it needs a Foreign Secretary's salary to invest in Loeb Library volumes in any number. Medical students can hardly buy, and may find it hard to borrow, them.