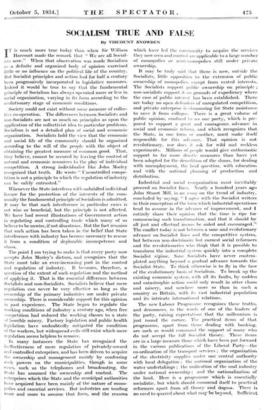 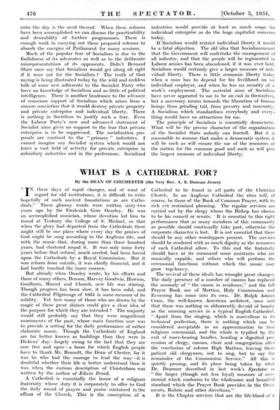 T is much more true today than when Sir William I Harcourt made the remark that " We are all Social- ists now." When that observation was made Socialism as a definite and organized body of opinion exercised little or no influence on the political life of the country. But Socialist principles and action had for half a century been progressively incorporated in legislative measures. Indeed it would be true to say that the fundamental principle of Socialism has always operated more or less in social organization, varying in its form .according to the evolutionary stage of economic conditions.

Society could not exist without some measure of collec- tive co-operation. The differences between Socialists and non-Socialists are not so much on principles as upon the application of the collectivist idea to particular problems. Socialism is not a detailed plan of social and economic organization: Socialists hold the view that the economic and social life of the community should be organized according to the will of the people with the object of obtaining the greatest measure of common good. That, they believe, cannot be secured by leaving the control of natural and economic resources to the play of individual competition. A strong individualist like John Morley recognized that truth. He wrote " Uncontrolled compe- tition is not a principle to which the regulation of industry can be safely entrusted."

Whenever the State interferes with unbridled individual licence for the protection of the interests of the com- munity the fundamental principle of Socialism is admitted. It may be that such interference in particular eases is not wise or beneficial, but the principle is not affected. We have had recent illustrations of Government action in regulating and controlling trade which many of us believe to be unwise, if not disastrous. But the fact remains that such action has been taken in the belief that State interference with industry has become necessary to rescue it from a condition of deplorable incompetence and chaos.

The point I am trying to make is that every party now accepts John Morley's dictum, and recognizes that the State must take an ever-increasing part in the control and regulation of industry. It becomes, therefore, a question of the extent of such regulation and the method of applying it. That is the essential difference between Socialists and non-Socialists. Socialists believe that mere regulation can never be very effective so long as the ownership of the primary industries are under private ownership. There is considerable support for this opinion in past experience. The State began to regulate the working. conditions of industry a century ago, when free competition had reduced the working classes to a state of horrible misery. Factory legislation and public health legislation have undoubtedly mitigated the condition of the workers, but widespread evils still exist which mere regulation seems helpless to remove.

In many instances the State has recognized the ineffectiVeriess of mere regulation of privately-owned and controlled enterprises, and has been driven to acquire the ownership and management mainly by conferring such powers on the municipalities, though in some cases, such as the telephones • and broadcasting; the State has assumed the ownership and control. The enterprises- which the State and the municipal authorities have acquired have been mainly of the nature of mono- polies and essential services. But industries arc tending more and more to assume that form, and the reasons which have led the community to acquire the services they now own and control arc applicable to a large number of monopolies or semi-monopolies still under private ownership.

It may be truly said that there is now, outside the Socialists, little opposition to the extension of public ownership of monopolies, except from vested interests. The Socialists support public ownership on principle ; non-socialists support it on grounds of expediency where the case of public interest has been established. There are today no open defenders of unregulated competition, and private enterprise is clamouring for State assistance to save it from collapse. There is a great, volume of public opinion, confined to no one party, which is pre- pared to support a great and courageous advance in- social and economic reform, and which recognizes that the State, in one form or another, must make itself. responsible for this advance.. That opinion is not revolutionary, nor does it ask for wild and reckless. experiments. Millions of people would give enthusiastic. support to far more drastic measures than have yet been adopted for the demolition of the slums, for dealing with unemployment, the laud question, with education and with the national planning of production and distribution.

Industrial and social reorganization must inevitably proceed on Socialist lines. Nearly a hundred years ago John Stuart Mill, in an essay on the trend of industry, concluded by saying. " I agree with the Socialist writers in their conception of the form which industrial operations, tend to assume in the advance of improvement, and I entirely share their opinion that the time is ripe for- commencing such transformation, and that it should by- all just and effectual Means be aided and. encouraged.", The conflict today is not between a sane and evolutionary advance on Socialist lines and the competitive system, but between non-doctrinaire but earnest social reformers and the revolutionaries who think that it is possible to transform the industrial system quickly into a complete Socialist regime. Sane Socialists have never contem- plated anything beyond a gradual advance towards the Socialist State. To think otherwise is to fly in the face of the evolutionary basis of Socialism. To break up the existing economic system, with all its faults, by sudden and catastrophic action could only result in utter chaos and misery, and nowhere more so than in such a country as Britain, with its vast industrial population and its intricate international relations.

The new Labour Programme recognizes these truths, and denounces, in the words of one of the leaders of the party, raising expectations that the millennium is just round the corner. The practical items of that programme, apart from those dealing with banking, are such as would command the support of many who do not accept the full Socialist theory. These items are in a large measure those which have been put forward in the various publications of the Liberal Party—the co-ordination- of the transport services ; the organization of the electricity supplies under one central authority with local delegation; the national organization of the water undertakings ; the unification- of the Oat industry under national ownership ; and the nationalization of the land. Here is a programme which is essentially socialistic; but which should commend itself to practical reformers apart from all theory and dogma. There is no need to quarrel about what thaybe"beyond, Sufficient unto the day is the need thereof. When these reforms have been accomplished we can discuss the practicability and desirability of further programmes. There is enough work in carrying out these proposed reforms to absorb the energies of Parliament for many sessions.

Much of the popular fear of Socialism is due to the foolishness of its advocates as well as to the deliberate misrepresentations of its opponents. Didn't Bernard Shaw once say that Socialism would get along all right if it were not for the Socialists ? The truth of that saying is being illustrated today by the wild and reckless talk of some new adherents to the Socialist Party who have no knowledge of Socialism and as little of political intelligence. There is another hindrance to the advance of conscious support of Socialism which arises from a sincere conviction that it would destroy private property and private enterprise and individual liberty. There is nothing in Socialism to justify such a fear. Even the Labour Party's new and advanced statement of Socialist aims gives no support to the fear that private enterprise is to be suppressed. The socialization pro- posals are confined to the " primary " industries. I cannot imagine any Socialist system which would not leave a vast field of activity for private enterprise in subsidiary industries and in the professions. Socialized industries would provide at least as much scope for individual enterprise as do the huge capitalist concerns today.

If Socialism would restrict individual liberty it would be a fatal objection. The old idea that Socialism meant that the Government will undertake the management of all industry, and that the people will be regimented in Labour armies has been abandoned, if it was ever held. Socialism would certainly give a larger measure of indi- vidual liberty. There is little economic liberty today when a man has to depend for his livelihood on an individual employer, and when he has no security of a week's employment. The material aims of Socialism have never appeared to me to be an end in themselves, but a necessary means towards the liberation of human beings from grinding toil, from poverty and insecurity. A Socialism which standardizes everybody and every- thing would have no attractions for me.

The principle of Socialism is essentially democratic. What will be the precise character of the organization of the Socialist State nobody can foretell. But it is reasonable to assume that under a democratic system it will be such as will ensure the use of the resources of the nation for the common good and such as will give the largest measure of individual liberty.