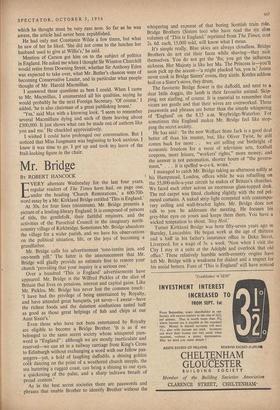 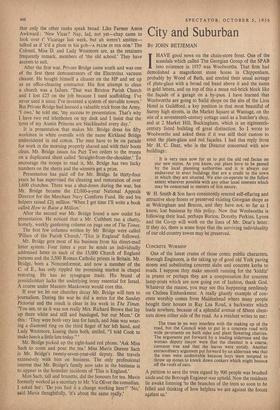 BY ROBERT HANCOCK EVERY alternate Wednesday for the last four years, regular readers of The Times have had, on page one. under the heading 'Church Restorations,' a 600-700- word essay by a Mr. Kirkland Bridge entitled 'This is England.'

At 30s. for four lines (minimum). Mr. Bridge presents a picture of a lending-library England. It is composed of persons of title, the gentlefolk, their faithful retainers. and the activities of the Parochial Council in the imaginary north- country village of Kirk bridge. Sometimes Mr. Bridge abandons the village for a wider parish, and we have his observations on the political situation, life, or the joys of becoming a grandfather.

Mr. Bridge calls his advertisement 'nine-tenths jam, and one-tenth pill.' The latter is the announcement that Mr. Bridge will gladly provide an estimate free to restore your church 'providing that your inquiry is a serious one.'

Over a hundred This is England' advertisements have appeared. Mr. Bridge is the Wilfred Pickles of the slice of Britain that lives on pensions, interest and capital gains. Like Mr. Pickles, Mr. Bridge has never lost the common touch : 'I have had the privilege of being entertained by Royalty, and have attended great banquets, yet never—I swear—have the richest foods and the daintiest confections tasted half as good as those great helpings of fish and chips at our Aunt Sissie's.'

Even those who have not been entertained by Royalty are eligible to become a Bridge Brother. 'It is as if we belonged to the same secret society whose whispered pass- word is "England": although we are mostly inarticulate and reserved—we can sit in a railway carriage from King's Cross to Edinburgh without exchanging a word with our fellow pas- sengers—yet, a field of laughing daffodils. a shining golden cock dancing on the point of a weathered church steeple, the sea battering a rugged coast, can bring a shining to our eyes. a quickening of the pulse, and a sharp indrawn breath of proud content.'

As in the best secret societies there are passwords and phrases that enable Brother to identify Brother without the whispering and expense of that boring Scottish train ride. Bridge Brothers (Sisters too) who have read the six slim volumes of 'This is England,' reprinted from The Times, cost 2s. 6d. each, 15,000 sold, will know what I mean.

It's simple really. Blue skies are always cloudless, Bridge Brothers do not cut their faces while shaving—they nick themselves. You do not get the 'flu; you get the influenza sickness. Her Majesty is like her Ma. The Princess is—you'll soon pick up the accent—`a reight plucked 'un, yon is.' Joints never cook in Bridge Sisters' ovens, they sizzle. Kettles seldom boil on a Sister's stove, they drum.

The favourite Bridge flower is the daffodil, and next to a dear little doggie, the lamb is their favourite animal. Skip- ping, not sizzling. of course. It is essential to remember that vicars are gentle and that their wives are overworked. These passwords and phrases are better than the simple whispering of 'England' on the 8.15 a.m. Weybridge-Waterloo. For sometimes this England makes Mr. Bridge feel like stop- ping the secret society.

He has said : 'In the new Welfare State Jack is a good deal better off than his master, but, like Oliver Twist, he still comes back for more . . we are selling our birthright of economic freedom for a mess of television sets, football coupons, more leisure, "workers' rights." more money; and the answer is not automation, shorter hours or "the govern- ment," . . . it is spelled w-o-r-k, WORK.'

I managed to catch Mr. Bridge taking an afternoon softly at his Hampstead, London, offices while he was refuelling on the 55,000-mile-a-year circuit he makes of Britain's churches. We faced each other across an enormous glass-topped desk. The red carpet was fitted, clashing slightly with the red pel- meted curtains. A naked strip light competed with contempo- rary ceiling and wall-bracket lights. Mr. Bridge does not talk to you, he addresses the meeting. He focuses his grey-blue eyes on yours and keeps them there. You have a wicked temptation to shout. 'Sieg Heil.'

Turner Kirkland Bridge was born fifty-seven years ago in Burnley, Lancashire. He began work at the age of thirteen and a half in his father's insurance office in Duke Street, Liverpool. for a wage of 5s. a week. 'Now when I visit the City I stay in a suite at the Adelphi and overlook that old office.' These relatively humble north-country origins have left Mr. Bridge with a weakness for dialect and a respect for his social betters. Fans of 'This is England' will have noticed that only the other ranks speak broad. Like Farmer Amos Awkward : 'New Vicar? Nay, lad, not yet—chap came to look over t' Vicarage last week, but ah weren't smitten— talked as if 'e'd a plum in his gob—A PLUM IN HIS cos.' The Colonel, Miss D. and Lady Westmore are, as the retainers frequently remark, members of 'the old school.' They have accents to suit.

After the first war, Private Bridge came south and was one of the first three demonstrators of the Electrolux vacuum cleaner. He bought himself a cleaner on the HP and set up as an office-cleaning contractor. His first attempt to clean a church was a failure. 'That was Brixton Parish Church and I lost £25 on the job because I used scaffolding. I've never used it since. I've invented a system of movable towers.' But Private Bridge had learned a valuable trick from the Army. `I owe,' he told me, 'my success to presentation. That's why I have two red telephones on my desk and 1 insist that the tyres of my Austin Princess are blackleaded every day.'

It Is presentation that makes Mr. Bridge dress his fifty workmen in white overalls with the name Kirkland Bridge embroidered in red cotton. The men have to be on parade for work in the morning properly shaved and with their boots clean. Mr. Bridge issues his Part Two orders to the troops on a duplicated sheet called 'Straight-from-the-shoulder.' To encourage the troops to read it, Mr. Bridge has two lucky numbers on the sheets and the winners get a prize.

Presentation has paid off for Mr. Bridge. In thirty-four years he has supervised the cleaning and restoration of over 1,600 churches. There was a shut-down during the war, but Mr. Bridge became the £2,000-a-year National Appeals Director for the Merchant Navy Comforts Fund. He and his helpers raised £21 million. 'When I get time I'll write a book called How to Raise a Million.'

After the second war Mr. Bridge found a new outlet for presentation. He noticed that a Mr. Cuthbert ran a chatty, homely, weekly gardening column on page one of The Times.

The first few columns written by Mr Bridge were called `Pillars of the Parish Church,' This is England' followed.

Mr. Bridge gets most of his business from his direct-mail letter system. Four times a year he sends an individually addressed letter to each of the 15,000 Church of England parsons and the 3,500 Roman Catholic priests in Britain. Mr. Bridge, born a Nonconformist, and now a member of the C. of E., has only rippled the promising market in chapel restoring. He has no synagogue trade. His brand of genzfitlichkeit lacks the underlying irony essential for Israel. A course under Maestro Mankowitz would cure this.

If ever we let our churches decay Mr. Bridge will turn to journalism. During the war he did a series for the Sunday Pictorial and the result is clear in his work in The Times. `You see, to us it was not really Mrs. Richard Brown that lay up there white and still and bandaged, but our Mum.' Or this : 'They were both very late for lunch, and Jean was wear- ing a diamond ring on the third finger of her left hand, and Lady Westmore, kissing them both, smiled, "I told Cook to make lunch a little late today." ' Mr. Bridge picked up the right-hand red phone. 'Ask Miss Sach to come and pour the tea.' Miss Mavis Doreen Sach is Mr. Bridge's twenty-seven-year-old deputy. She travels extensively with him on business. The only professional interest that Mr. Bridge's family now take in the business is to appear in the homelier incidents of 'This is England.'

Miss Sach, tall and brunette, did the honours for tea. Mavis formerly worked as a secretary to Mr. Vic Oliver the comedian. 1 asked her : 'Do you find it a change working here?' No,' said Mavis thoughtfully, 'it's about the same really.'