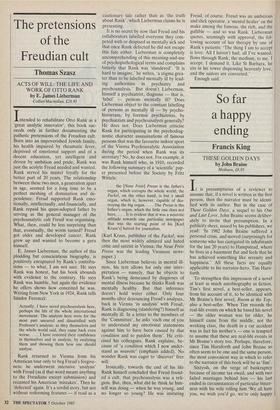 The pretensions of the Freudian cult

ACTS OF WILL: THE LIFE AND WORK OF OTTO RANK by E. James Lieberman

Intended to rehabilitate Otto Rank as a 'great analytic innovator', this book suc- ceeds only in further documenting the pathetic pretensions of the Freudian cult. Born into an impoverished Jewish family, his health impaired by rheumatic fever, deprived of emotional support and of a decent education, yet intelligent and driven by ambition and pride, Rank was just the acolyte Freud needed and wanted. Rank served his master loyally for the better part of 20 years. The relationship between these two men, a generation apart in age, seemed for a long time to be a perfect meshing of domination and de- pendence: Freud supported Rank emo- tionally, intellectually, and financially, and Rank repaid his quasi-adopted father by serving as the general manager of the psychoanalytic cult Freud was organising. What, then, could be less surprising than that, eventually, the worm turned? Freud got older and developed cancer; Rank grew up and wanted to become a guru himself.

E. James Lieberman, the author of this plodding but conscientious biography, is positively enraptured by Rank's contribu- tions — to what, I am not sure. He says Rank was honest, but his book abounds with evidence to the contrary. He says Rank was humble, but again the evidence he offers shows how conceited he was. Writing from New York in 1924, Rank tells Sandor Ferenczi:

Actually, I have saved psychoanalysis here, perhaps the life of the whole international movement. The analysts here were for the most part uncured and dissatisfied with Professor's analysis: as they themselves and the whole world said, they came back even worse. . . . I have restored their confidence in themselves and in analysis, by analysing them and showing them how one should analyse.

Rank returned to Vienna from his American tour only to beg Freud's forgive- ness: he underwent intensive 'analysis' with Freud (as if that word meant anything to the Freudians except submission) and recanted his American 'mistakes'. Then he 'defected' again. It's a sordid story, but not without redeeming features — if read as a cautionary tale rather than as 'the truth about Rank', which Lieberman claims he is presenting.

It is no secret by now that Freud and his collaborators labelled everyone they com- peted with or despised as mentally sick and that once Rank defected he did not escape this fate either. Lieberman is completely uncomprehending of this meaning-and-use of psychopathological terms and complains bitterly that Rank was 'slandered'. 'It is hard to imagine,' he writes, 'a stigma grea- ter than to be labelled mentally ill by lead- ing authorities in psychiatry and psychoanalysis.' But doesn't Lieberman, himself a psychiatrist, diagnose — that is, 'label' — persons mentally ill? Does • Lieberman object to the constant labelling of persons as mentally ill — by psycho- historians, by forensic psychiatrists, by psychiatrists and psychoanalysts generally? He does not. Does Lieberman criticise Rank for participating in the psychodiag- nostic character assassinations of famous persons that was the favourite indoor sport of the Vienna Psychoanalytic Association during the period when Rank was its secretary? No, he does not. For example, it was Rank himself who, in 1910, recorded the following summary of a 'scientific' pap- er presented before the Society by Fritz Wittels: . . . the [Neue Freiej Presse is the father's organ, which corrupts the whole world; the Fackel, on the other hand, is but a small organ, which is, however, capable of des- troying the big organ. . . The Presse is the father's organ, which the little one does not have. . . . It is evident that it was a neurotic attitude towards one particular newspaper that was the starting point of his [Karl Kraus's] hatred for journalists.

(Karl Kraus, publisher of the Fackel, was then the most widely admired and hated critic and satirist in Vienna; the Neue Freie Presse was the leading Viennese news- paper.) Since Lieberman believes in mental ill- ness, his text allows for only one inter- pretation — namely, that he objects to Rank's being demeaned by diagnoses of mental illness because he thinks Rank was mentally healthy. But that inference doesn't hold water either. Only four months after denouncing Freud's analyses, back in Vienna 'in analysis' with Freud, Rank is diagnosing (slandering?) himself as mentally ill. In a letter to the members of the 'Committee', he asks 'each one of you to understand my emotional statements against him to have been caused by that condition and to pardon them'. He criti- cised his colleagues, Rank explains, be- cause of 'a condition which I now under- stand as neurotic' (emphasis added). No wonder Rank was eager to 'discover' free will.

Ironically, towards the end of his life Rank himself concluded that Freud found- ed a cult, that psychoanalysis was a reli- gion. But, then, what did he think he him- self was doing — when he was young, and no longer so young? He was imitating Freud, of course. Freud was an ambitious and slick operator, a 'mental healer' on the make among the famous, the rich, and the gullible — and so was Rank. Lieberman quotes, seemingly with approval, the fol- lowing account of her therapy by one of Rank's patients: 'The thing I am to accept is love. All I haven't had, all I've wanted, flows through Rank, the medium, to me. I accept. I demand it. Like St Barbara, he sits in his tower dispensing heavenly love, and the suitors are converted.'