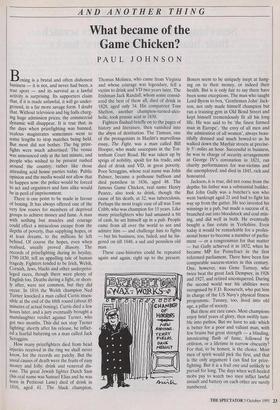 What became of the Game Chicken?

Boxing is a brutal and often dishonest business — it is not, and never had been, a true sport — and its survival as a lawful activity is surprising. Its supporters claim that, if it is made unlawful, it will go under- ground, in a far more savage form. I doubt that. Without television and big halls charg- ing huge admission prices, the commercial dynamic will disappear. It is true that, in the days when prizefighting was banned, zealous magistrates sometimes went to some lengths to stop matches being held. But most did not bother. The big prize- fights were much advertised. The venue was announced only at the last minute, and people who wished to be present rushed around the country, rather like those attending acid house parties today. Public Opinion and the media would not allow that to happen now: the police would be forced to act and organisers and fans alike would be in peril of imprisonment.

There is one point to be made in favour of boxing. It has always offered one of the very few routes for members of deprived groups to achieve money and fame. A man with nothing but muscles and courage could effect a miraculous escape from the depths of poverty, thus supplying hopes, or at least dreams, to the millions he left behind. Of course the hopes, even when realised, usually proved illusory. The records of prizefighting during its heyday, 1790-1830, tell an appalling tale of human tragedy. Fighters tended to be Irish, Welsh, Cornish, Jews, blacks and other underprivi- leged races, though there were plenty of English too. Deaths during a fight, or short- ly after, were not common, but they did occur. In 1816 the Welsh champion Ned Turner knocked a man called Curtis insen- sible at the end of the 68th round (about 85 minutes of actual boxing). Curtis died a few hours later, and a jury eventually brought a manslaughter verdict against Turner, who got two months. This' did not stop Turner fighting: shortly after his release, he inflict- ed a fearful battering on a man called Jack Scroggins.

. How many prizefighters died from head injuries received in the ring we shall never know, for the records are patchy. But the usual causes of death were the fruits of easy money and folly: drink and venereal dis- ease. The great Jewish fighter Dutch Sam (his real name was Samuel Elias and he was born in Petticoat Lane) died of drink in 1816, aged 41. The black champion, Thomas Molinea, who came from Virginia and whose courage was legendary, fell a victim to drink and VD two years later. The Irishman Jack Randall, whom some consid- ered the best of them all, died of drink in 1828, aged only 34. His compatriot Tom Shelton, another champion-turned-alco- holic, took prussic acid in 1830.

Fighters flashed briefly on to the pages of history and literature, then vanished into the abyss of destitution. The Tinman, one of the protagonists in Hazlitt's marvellous essay, The Fight, was a man called Bill Hooper, who made saucepans in the Tot- tenham Court Road. He was taken up by sprigs of nobility, spoilt for his trade, and died of drink and VD, in great poverty. Poor Scroggins, whose real name was John Palmer, became a pothouse buffoon and died penniless in 1836, aged 48. The famous Game Chicken, real name Henry Pearce, also took to drink, though the cause of his death, at 32, was tuberculosis. Perhaps the most tragic case of all was Tom Cribb, who was champion for 15 years. Like many prizefighters who had amassed a bit of cash, he set himself up in a pub. People came from all over the world to see and admire him — and challenge him to fights — but his business, too, failed, and he lin- gered on till 1848, a sad and penniless old man.

These case-histories could be repeated again and again, right up to the present. Boxers seem to be uniquely inept at hang- ing on to their money, or indeed their health. But is is only fair to say there have been some exceptions. The man who taught Lord Byron to box, 'Gentleman John' Jack- son, not only made himself champion but ran a training gym in Old Bond Street and kept himself tremendously fit all his long life. He was said to be 'the finest formed man in Europe', 'the envy of all men and the admiration of all women', always beau- tifully dressed and much bowed-to as he walked down the Mayfair streets at precise- ly 5'2 miles an hour. Successful in business, he was in charge of security arrangements at George IV's coronation in 1821, ran charity performances for war-victims and the unemployed, and died in 1845, rich and honoured.

Jackson,. it is true, did not come from the depths: his father was a substantial builder. But John Gully was a butcher's son who went bankrupt aged 21 and had to fight his way up from the gutter. He too invested his winnings in a pub, but made a success of it, branched out into bloodstock and coal min- ing, and did well in both. He eventually bought a fine estate in Yorkshire. Even today it would be remarkable for a profes- sional boxer to become a member of parlia- ment — or a congressman for that matter — but Gully achieved it in 1832, when he became MP for Pontefract in the first reformed parliament. There have been few comparable success-stories in this century. One, however, was Gene Tunney, who twice beat the great Jack Dempsey, in 1926 and 1927, and retired unconquered. During the second world war his abilities were recognised by F.D. Roosevelt, who put him in charge of the US Navy's physical fitness programme. Tunney, too, lived into old age, a pillar of society.

But these are rare cases. Most champions enjoy brief years of glory, then swiftly tum- ble into pathos. But we have to ask: which is better for a poor and valiant man, with few brains but great strength — a blinding, intoxicating flash of fame, followed by oblivion, or a lifetime in narrow obscurity? For that, to be honest, is the choice. Most men of spirit would pick the first, and that is the only argument I can find for prize- fighting. But it is a frail one and unlikely to prevail for long. The days when well-heeled mobs pay to watch two men inflict lawful assault and battery on each other are surely numbered.