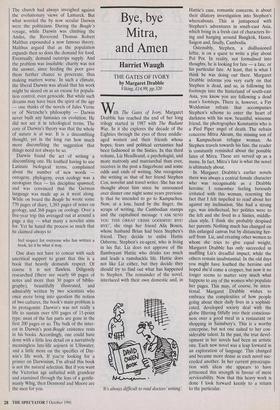 THE GATES OF IVORY by Margaret Drabble Viking, .£14.99, pp.320 With The Gates of Ivory, Margaret Drabble has reached the end of her long trilogy started in 1987 with The Radiant Way, In it she explores the decade of the Eighties through the eyes of three middle- aged women and their friends whose hopes, fears and political certainties had been fashioned in the Sixties. In this third volume, Liz Headleand, a psychologist, and more matronly and matriarchal than ever, receives in the post a fingerbone and some odds and ends of writing. She recognises the writing as that of her friend Stephen Cox, novelist and travel writer. She has not thought about him since he announced over dinner one night some years previous- ly that he intended to go to Kampuchea. Now, at a loss, faced by the finger, the scraps of writing, the Cambodian stamps and the capitalised message 'I ASK SEND YOU THIS GREAT CRISIS GOODBYE! BYE! BYE!', she rings her friend Alix Boxen, whose husband Brian had been Stephen's friend. They decide to enlist Hattie Osborne, Stephen's ex-agent, who is living in his flat. Liz does not approve of the flamboyant Hattie who drinks too much and leads a ramshackle life. Hattie does not like Liz either, but they decide they should try to find out what has happened to Stephen. The remainder of the novel, interlaced with their own domestic and, in 'It's always difficult to read doctors' writing: Hattie's case, romantic concerns, is about their dilatory investigation into Stephen's whereabouts. This is juxtaposed with Stephen's adventures in south-east Asia, which bring in a fresh cast of characters liv- ing and hanging around Bangkok, Hanoi, Saigon and, finally, Cambodia.

Ostensibly, Stephen, a disillusioned leftie, is on a quest to write a play about Pol Pot. In reality, not formalised into thoughts, he is looking for fate — a fate, or his particular fate. At least, that is what I think he was doing out there. Margaret Drabble informs you very early on that Stephen is dead, and so, in following his footsteps into the hinterland of south-east Asia, you know you are following a dead man's footsteps. There is, however, a Fay Weldonian refrain that accompanies Stephen's scheme to enter the heart of darkness with his new, beautiful, winsome friend, the photographer Konstantin who is a Pied Piper angel of death. The refrain concerns Mitra Akrum, the missing son of a ICampuchean refugee woman. As Stephen travels towards his fate, the reader is constantly reminded about the possible fates of Mitra. These are served up as a menu. In fact, Mitra's fate is what the novel is ultimately about.

In Margaret Drabble's earlier novels there was always a central female character who was recognisable as a Drabble heroine. I remember feeling furiously irritated with this woman, resenting the fact that I felt impelled to read about her against my inclination. She had a strong ego, was intellectual, her politics were to the left and she lived in a Sixties, middle- class style. I think she probably despised her parents. Nothing much has changed on this enlarged canvas but by distancing her- self from Liz, and creating other women to whom she tries to give equal weight, Margaret Drabble has only succeeded in muffling Liz's dreadful impact, while the others remain insubstantial. In the old days you might have loathed the heroine and hoped she'd come a cropper, but now it no longer seems to matter very much what happens to any of the women who populate her pages. This may, of course, be inten- tional. Margaret Drabble wishes to embrace the complexities of how people going about their daily lives in a sophisti- cated, developed society deal with the globe filtering fitfully into their conscious- ness over a good meal in a restaurant or shopping in Sainsbury's. This is a worthy enterprise, but not one suited to her con- siderable talent. In the past, the true devel- opment in her novels had been an artistic one. Each new novel was a leap forward in an exploration of language. This changed and became more dense as each novel suc- ceeded another. In her current preoccupa- tion with ideas she appears to have jettisoned this strength in favour of mere serviceability. Now that this heavy work is done I look forward keenly to a return to the particular.