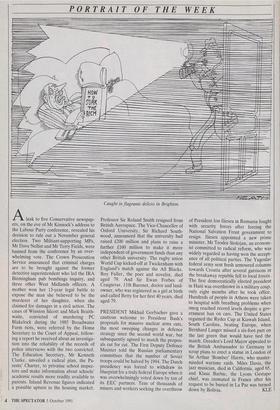 Caught in flagrante delicto in Brighton.

Aleak to five Conservative newspap- ers, on the eve of Mr Kinnock's address to the Labour Party conference, revealed his decision to rule out a November general election. Two Militant-supporting MPs, Mr Dave Nellist and Mr Terry Fields, were banned from the conference by an over- whelming vote. The Crown Prosecution Service announced that criminal charges are to be brought against the former detective superintendent who led the IRA Birmingham pub bombings inquiry, and three other West Midlands officers. A mother won her 13-year legal battle to expose the man she believed to be the murderer of her daughter, when she claimed for damages in a civil action. The cases of Winston Silcott and Mark Braith- waite, convicted of murdering PC Blakelock during the 1985 Broadwater Farm riots, were referred by the Home Secretary to the Court of Appeal, follow- ing a report he received about an investiga- tion into the reliability of the records of police interviews with the two convicted. The Education Secretary, Mr Kenneth Clarke, unveiled a radical plan, the Pa- rents' Charter, to privatise school inspec- tors and make information about schools' academic results more readily available to parents. Inland Revenue figures indicated Professor Sir Roland Smith resigned from British Aerospace. The Vice-Chancellor of Oxford University, Sir Richard South- wood, announced that the university had raised f200 million and plans to raise a further £160 million to make it more independent of government funds than any other British university. The rugby union World Cup kicked-off at Twickenham with England's match against the All Blacks. Roy Fuller, the poet and novelist, died aged 79. And Sir Ewan Forbes of Craigievar, 11th Baronet, doctor and land- owner, who was registered as a girl at birth and called Betty for her first 40 years, died aged 79.

PRESIDENT Mikhail Gorbachev gave a cautious welcome to President Bush's proposals for massive nuclear arms cuts, the most sweeping changes in defence strategy since the second world war, but subsequently agreed to match the propos- als cut for cut. The First Deputy Defence Minister told the Russian parliamentary committees that the number of Soviet troops could be halved by 1994. The Dutch presidency was forced to withdraw its blueprint for a truly federal Europe when it was overwhelmingly voted down by ten of its EEC partners. Tens of thousands of miners and workers seeking the overthrow of President Ion Iliescu in Rumania fought with security forces after forcing the National Salvation Front government to resign. Iliescu appointed a new prime minister, Mr Teodor Stolojan, an econom- ist committed to radical reform, who was widely regarded as having won the accept- ance of all political parties. The Yugoslav federal army sent fresh armoured columns towards Croatia after several garrisons in the breakaway republic fell to local forces. The first democratically elected president in Haiti was overthrown in a military coup, only eight months after he took office. Hundreds of people in Athens were taken to hospital with breathing problems when smog reached record levels despite a gov- ernment ban on cars. The United States regained the Ryder Cup at Kiawah Island, South Carolina, beating Europe, when Bernhard Langer missed a six-foot putt on the last green that would have tied the match. Dresden's Lord Mayor appealed to the British Ambassador to Germany to scrap plans to erect a statue in London of Sir Arthur 'Bomber' Harris, who master- minded wartime raids. Miles Davis, the jazz musician, died in California, aged 65, and Klaus Barbie, the Lyons Gestapo chief, was cremated in France after his request to be buried in La Paz was turned