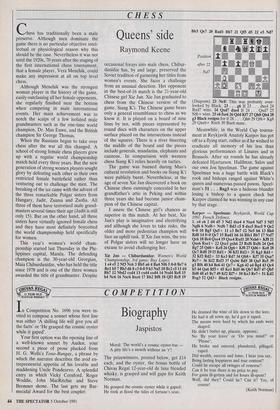 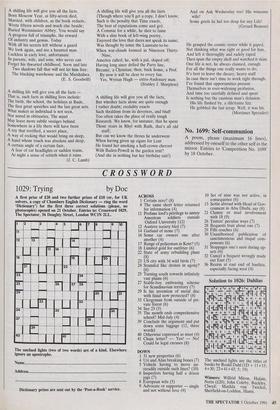 In Competition No. 1696 you were in- vited to compose a sonnet whose first line was either 'A shilling life will give you all the facts' or 'He grasped the cosmic oyster while it gaped'.

Your first option was the opening line of a well-known sonnet by Auden, your second a piece of prose plucked from H. G. Wells's Tono-Bungay, a phrase by which the narrator describes the avid en- trepreneurial appetite of his lovable and maddening Uncle Ponderevo. A splendid entry in which Vicky Cornford, Roger Woddis, John MacRitchie and Steve Bremner shone. The last gets my Bar- mecidal Award for the best couplet:

Moral: The world's a cosmic oyster-bar — A pity life's a month without an `e!

The prizewinners, printed below, get £14 each, and the oyster, the bonus bottle of Chivas Regal 12-year-old de luxe blended whisky, is grasped and will gape for Keith Norman.

He grasped the cosmic oyster while it gaped; He took at flood the tides of fortune's seas; He drained the wine of life down to the lees; He had it all sown up, he'd got it taped.

The means were hard by which his ends were shaped: He didn't butter up, placate, appease; No 'By your leave' or 'Do you mind?' or `Please'; He broke and entered, plundered, pillaged, raped.

Did wealth, success and fame, I hear you say, Bring lasting happiness and true content? Could he escape all twinges of remorse? Can it be true there is no price to pay For gains ill-gotten and for hours ill-spent? Well, did they? Could he? Can it? Yes, of course! (Keith Norman) A shilling life will give you all the facts. Born Moscow Year, at fifty-seven died, Married, with children, as the book redacts, Wrote fifteen novels and much else beside; Buried Westminster Abbey. You would say A progress full of triumphs, the reward Of industry and genius. Today With all his secrets left without a guard We look again, and see a haunted man, Luckless in early love, unfortunate In parents, wife, and sons, who never can Forget his thwarted childhood. Soon and late Two shadows fall that will not let him free: The blacking warehouse and the Marshalsea.

(E. S. Goodwill) A shilling life will give you all the facts — That is, such facts as shilling lives include: The birth, the school, the holidays at Bude, The first great speeches and the last great acts. What makes us individual is not seen, Nor noted in obituaries. The mind May leave more subtle vestiges behind. Somewhere in a life there will have been A toy that terrified, a secret place, A way of rocking that would bring on sleep, A hand whose touch was absolute and deep, A certain angle of a certain face, A fear of car headlights or sudden trains, At night a sense of rebirth when it rains.

(J. C. Lamb) A shilling life will give you all the facts (Though where you'll get a copy, I don't know; Such is the penalty that Time exacts, The best of reputations come and go). A Commie for a while, he shot to fame With a slim book of left-wing poetry, Enjoyed the love that dares not speak its name, Was thought by some the Laureate-to-be. When war-clouds loomed in Nineteen Thirty- Nine, America called; he, with a pal, sloped off; Having long since defied the Party line, Became, a Christian; then, back home, a Prof.

By now it will be clear to every fan: Yes, Wystan Hugh — extra-Aucienary man.

(Stanley J. Sharpless) A shilling life will give you all the facts, But whether facts alone are quite enough I rather doubt; credulity exacts Such thraldom from its devotees, and bluff Too often takes the place of really tough Research. We know, for instance, that he spent Those years in Rhyl with Ruth, that's all old stuff; But can we know the throes he underwent When having given up cigars for Lent He found her smoking a half-crown cheroot With Baden-Powell in the garden tent? (And she in nothing but her birthday suit!) And on Ash Wednesday too! His winsome wife!

Some griefs lie hid too deep for any Life!

(Gerard Benson) He grasped the cosmic oyster while it gaped, Not thinking what was right or good for him, And left it thoroughly and rudely raped Then spun the empty shell and watched it skim. One life is not, he always claimed, enough For all the things one really wants to do; It's best to leave the dreary, heavy stuff In case there isn't time to work right through. I've found that opportunities present Themselves in ever-widening profusion, And time too carefully defined and spent Is nothing but the cautious man's delusion.

His life flashed by, a dilettante fizz.

He gobbled the last scrap. Well, it was his.