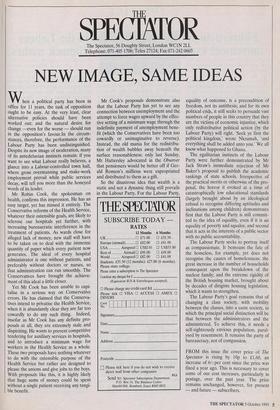 Mr Robin Cook, the spokesman on health, confirms this impression. He has an easy target, yet has missed it entirely. The Conservative reforms of the Health Service, whatever their ostensible goals, are likely to sclerose our hospitals yet further, with increasing bureaucratic interference in the treatment of patients. As wards close for alleged lack of money, new staff will have to be taken on to deal with the immense quantity of paper which every patient now generates. The ideal of every hospital administrator is one without patients, and preferably without doctors or nurses, so that administration can run smoothly. The Conservatives have brought the achieve- ment of this ideal a little closer.

Yet Mr Cook has been unable to capi- talise in a serious way on Conservative errors. He has claimed that the Conserva- tives intend to privatise the Health Service, when it is abundantly clear they are far too cowardly to do any such thing. Indeed, insofar as Mr Cook has any definite pro- posals at all, they are extremely stale and dispiriting. He wants to prevent competitive tendering for auxiliary services in hospitals, and to introduce a minimum wage for workers in the Health Service as a whole. These two proposals have nothing whatever to do with the ostensible purpose of the Health Service but rather are designed to please the unions and give jobs to the boys. With proposals like this, it is highly likely that huge sums of money could be spent without a single patient receiving any tangi- ble benefit.

Mr Cook's proposals demonstrate also that the Labour Party has yet to see any connection between unemployment and the attempt to force wages upward by the effec- tive setting of a minimum wage through the indefinite payment of unemployment bene- fit (which the Conservatives have been too cowardly or unimaginative to reverse). Instead, the old mania for the redistribu- tion of wealth bubbles away beneath the surface reasonableness: only last Sunday, Mr Hattersley advocated in the Observer that pensioners would be better off if Ger- ald Ronson's millions were expropriated and distributed to them as a gift.

equality of outcome, is a precondition of freedom, not its antithesis; and for its own political ads, it still seeks to persuade vast numbers of people in this country that they are the victims of economic injustice, which only redistributive political action (by the Labour Party) will right. 'Seek ye first the political kingdom,' wrote Nkrumah, 'and everything shall be added unto you.' We all know what happened to Ghana.

The egalitarian instincts of the Labour Party were further demonstrated by Mr Jack Straw's immediate rejection of Mr Baker's proposal to publish the academic rankings of state schools. Irrespective of the practical merits or otherwise of the pro- posal, the horror it evoked at a time of catastrophically low educational standards (largely brought about by an ideological refusal to recognise differing aptitudes and inclinations among children) demonstrates first that the Labour Party is still commit- ted to the idea of equality, even if it is an equality of poverty and squalor, and second that it acts in the interests of a public sector with no public accountability.

The Labour Party seeks to portray itself as compassionate. It bemoans the fate of the homeless, for example, yet does not recognise the causes of homelessness: the great increase in the number of households consequent upon the breakdown of the nuclear family; and the extreme rigidity of the British housing market, brought about by decades of dirigiste housing legislation, which it wants to strengthen.

The Labour Party's goal remains that of changing a class society, with mobility between the classes, into a caste society, in which the principal social distinction will be that between the administrators and the administered. To achieve this, it needs a self-righteously envious population, paral- ysed by resentment. It remains the party of bureaucracy, not of compassion.

FROM this issue the cover price of The Spectator is rising by 10p to £.1.60, an increase of 61/2 per cent since the price was fixed a year ago. This is necessary to cover some of our cost increases, particularly in postage, over the past year. The price remains unchanged, however, for present — and future — subscribers.