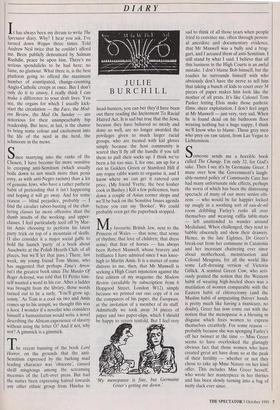 It has always been my dream to write The Spectator diary. Why? I hear you ask. I've turned down Wogan three times. Told Andrew Neil twice that he couldn't afford me. Been publicly denounced by Salman Rushdie, peace be upon him. There's no serious spondulicks to be had here; no fame, no glamour. What there is, is the best platform going to offend the maximum number of constipated, change-counting Anglo-Catholic creeps at once. But I don't only do it to annoy. I really think I can make a difference to your drab lives. You see, the organs for which I usually kick- start the circulation — the Face, the Mod- ern Review, the Mail On Sunday — are notorious for their unimpeachably hip readership. But here, at last, is the chance to bring some colour and excitement into the life of the nerd in the herd, the schmooze in the mews.

Since marrying into the ranks of the Chosen, I have become far more sensitive to creeping anti-Semitism (which usually boils down to not much more than penis envy, as with anti-Negro racism) than a lot of genuine Jews, who have a rather pathetic habit of pretending that it isn't happening and hoping it will go away. And for some reason — blind prejudice, probably — I find the cavalier taboo-busting of the chat- tering classes far more offensive than the dumb insults of the working- and upper- classes. I feel particularly teed off by Mar- tin Amis choosing to perform his latest party trick on top of a mountain of skulls. (I also consider it a major social gaffe to hold the launch 'party' of a book about Auschwitz at the Polish Hearth Club, of all places, but we'll let that pass.) There, last week, my young friend Tom Shone, who has suggested that perhaps Time's Arrow isn't the greatest book since The Murder Of Roger Ackroyd, was told that El Petito him- self wanted a word in his ear. After a ladder was brought from the library, those words turned out to be a surly, 'You'll grow up, sonny.' As Tom is a cool six two and Amis comes up to his armpit, we thought this was a hoot. I wonder if a novelist who considers himself a humanitarian would write a novel describing the African experience of slavery without using the letter 0? And if not, why not? A gimmick is a gimmick.

The recent banning of the book Lord Horror, on the grounds that the anti- Semitism expressed by the barking mad leading character was 'obscene', caused shrill misgivings among the screaming meemies of the Left-over press. But had the nutter been expressing hatred towards any other ethnic group from Hindus to

head-hunters, you can bet they'd have been out there reading the Incitement To Racial Hatred Act. It is sad but true that the Jews, because they have behaved so nicely and done so well, are no longer awarded the privileges given to much larger racial groups, who are treated with kid gloves simply because the host community is scared they'll fly off the handle if you tell them to pull their socks up. I think we've been a bit too nice. I, for one, am up for a riot in Golders Green or Stamford Hill if any rogue rabbi wants to organise it, and I know where we can get it catered cost price. (My friend Yvette, the best kosher cook in Bushey.) Kill a few policemen, burn down a couple of Asian corner shops and we'll be back on the Sensitive Issues agenda before you can say 'Booker'. We could probably even get the paperback stopped.

My favourite British Jew, next to the Princess of Wales — that nose; that sense of rhythm; that love of children; that dress sense; that fear of horses — has always been Robert Maxwell, whose bravery and brilliance I have admired since I was knee- high to Martin Amis. It is a matter of some distress to me, then, that Mr Maxwell is seeking a High Court injunction against the first edition of my magazine the Modern Review (available by subscription from 6 Hopgood Street, London W12) simply because we printed out one copy of it on the computers of his paper, the European, at the invitation of a member of its staff. Admittedly we took away 34 pieces of paper and two paper-clips, which I should be happy to return tenfold. But I feel very 'My menopause is fine, but Germaine Greer's getting me down.' sad to think of all those years when people tried to convince me, often through person- al anecdote and documentary evidence, that Mr Maxwell was a bully and a brag- gart, and I accused them of anti-Semitism. I still stand by what I said. I believe that all this business in the High Courts is an awful mistake. I don't blame Bob himself, but the toadies he surrounds himself with who obviously don't have the nerve to tell him that taking a bunch of kids to court over 34 pieces of paper makes him look like the mother of all prats. It's like Colonel Tom Parker letting Elvis make those pathetic films: sheer exploitation. I don't feel angry at Mr Maxwell — just very, very sad. When he is found dead on his bathroom floor wearing nothing but a huge nappy, I think we'll know who to blame. Those grey men who prey on raw talent, from Las Vegas to Lichtenstein.

Someone sends me a horrible book called The Change. I'm only 32, for God's sake. Then I see it's by Germaine Greer. I muse over how the Government's laugh- ably-named policy of Community Care has had many unfortunate side effects, perhaps the worst of which has been the distressing spectacle of many of our more senior citi- zens — who would be far happier locked up snugly in a soothing sort of eau-de-nil room dribbling Farley's rusks all over themselves and weaving raffia table-mats — left unattended to wander around Medialand. When challenged, they tend to babble obscenely and show their drawers. Hence, in the late Eighties, Dr Greer's break-out from her commune in Catatonia and her incessant chattering ever since about motherhood, menstruation and Colonel Mengistu, for all the world like some Left-dressing version of Victoria Gillick. A seminal Green Cow, who seri- ously posited the notion that the Western habit of wearing high-heeled shoes was a mutilation of women comparable with the Eastern habit of clitorectomy (and the Muslim habit of amputating thieves' hands is pretty much like having a manicure, no doubt), Greer has now come out with the notion that the menopause is a blessing in disguise which frees women to express themselves creatively. For some reason — probably because she was sponging Farley's off her twinset at the time — Miss Greer seems to have overlooked the glaringly obvious fact that those women who have created great art have done so at the peak of their fertility — whether or not they chose to take up Mme Nature on her kind offer. This includes Miss Greer herself, who wrote her masterpiece in her thirties and has been slowly turning into a bag of nutty slack ever since.