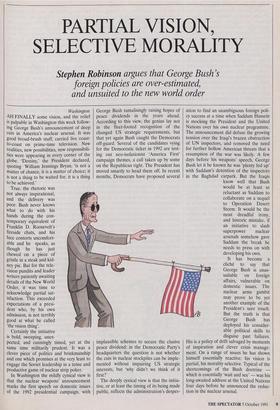 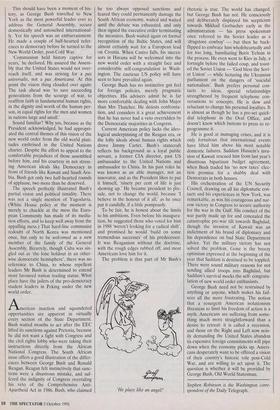 foreign policies are over-estimated, and unsuited to the new world order

Washington AH FINALLY some vision, and the relief is palpable in Washington this week follow- ing George Bush's announcement of deep cuts in America's nuclear arsenal. It was good broad-brush stuff, carried live coast- to-coast on prime-time television. New realities, new possibilities, new responsibili- ties were appearing in every corner of the globe. 'Destiny,' the President declared, quoting William Jennings Bryan, 'is not a matter of chance, it is a matter of choice; it is not a thing to be waited for, it is a thing to be achieved.'

True, the rhetoric was not always inspirational, and the delivery was poor. Bush never knows what to do with his hands during the con- temporary equivalent of Franklin D. Roosevelt's fireside chats, and his face contorts uncomfort- able and he speaks, as though he has just chewed on a piece of gristle in a steak and kid- ney pie. But for the tele- vision pundits and leader writers patiently awaiting details of the New World Order, it was time to acknowledge partial sat- isfaction. This exceeded expectations of a presi- dent who, by his own admission, is not terribly good at what he called 'the vision thing'.

Certainly the initiative is bold, sweeping, unex- pected, and cunningly timed, yet at the same time militarily prudent. It was a clever piece of politics and brinkmanship and one which promises at the very least to engage the Soviet leadership in a tense and productive game of nuclear strip poker.

In Washington the mildly cynical view is that the nuclear weapons' announcement marks the first speech on domestic issues of the 1992 presidential campaign, with George Bush tantalisingly raising hopes of peace dividends in the years ahead. According to this view, the genius lay not in the fleet-footed recognition of the changed US strategic requirements, but that yet again Bush caught the Democrats off-guard. Several of the candidates vying for the Democratic ticket in 1992 are test- ing out neo-isolationist 'America First' campaign themes, a call taken up by some on the Republican right. The President has moved smartly to head them off. In recent months, Democrats have proposed several implausible schemes to secure the elusive peace dividend: in the Democratic Party's headquarters the question is not whether the cuts in nuclear stockpiles can be imple- mented without impairing US strategic interests, but 'why didn't we think of it first?'

The deeply cynical view is that the initia- tive, or at least the timing of its being made public, reflects the administration's desper- ation to find an unambiguous foreign poli- cy success at a time when Saddam Hussein is mocking the President and the United Nations over his own nuclear programme. The announcement did defuse the growing tension over the Iraqi's brazen obstruction of UN inspectors, and removed the need for further hollow American threats that a resumption of the war was likely. A few days before his weapons' speech, George Bush let it be known he was 'plenty fed up' with Saddam's detention of the inspectors in the Baghdad carpark. But the Iraqis know well that Bush would be at least as reluctant as Saddam to collaborate on a sequel to Operation Desert Storm. It would be the most dreadful irony, and historic mistake, if an initiative to slash superpower nuclear arsenals somehow gave Saddam the break he needs to press on with developing his own. This should have been a moment of his- tory, as George Bush travelled to New York as the most powerful leader ever to address the General Assembly, secure domestically and untouched international- ly. Yet his speech was an embarrassment. He made a couple of half-hearted refer- ences to democracy before he turned to the New World Order, post-Cold War.

'Communism held history captive for years,' he declared. He assured the Assem- bly that the United States would not over- reach itself, and was striving for a pax universalis, not a pax Americana. At this point the vision thing clouded over again: The task ahead was 'to save succeeding generations from the scourge of war, to reaffirm faith in fundamental human rights, in the dignity and worth of the human per- son, in equal rights for the men and women in nations large and small.'

Sound familiar? Why yes, because as the President acknowledged, he had appropri- ated the central themes of this vision of the new world order from the old world plati- tudes enshrined in the United Nations charter. Despite the effort to appeal to the comfortable prejudices of those assembled before him, and his courtesy in not stress- ing American ideals like Democracy in front of friends like Kuwait and Saudi Ara- bia, Bush got only two half-hearted rounds of applause, two more than he deserved.

The speech perfectly illustrated Bush's partial vision and political timidity. There was not a single mention of Yugoslavia. (White House policy at the moment is merely to chuckle at the mess the Euro- pean Community has made of its media- tion efforts, and to keep well away from the appalling mess.) That hard-line communist redoubt of North Korea was mentioned once, but only to be welcomed as a new member of the family of the General Assembly. Bizarrely, though Cuba was sin- gled out as 'the lone holdout in an other- wise democratic hemisphere', there was no reference to China, to whose repellent leaders Mr Bush is determined to extend most favoured nation trading status. What place have the jailers of the pro-democracy student leaders in Peking under the new world order.

Anerican inaction and squandered opportunities are apparent in virtually every section of the State Department. Bush waited months to act after the EEC lifted its sanctions against Pretoria, because he did not want a fight with Congress and the civil rights lobby who were taking their instructions directly from the African National Congress. The South African issue offers a good illustration of the differ- ences between George Bush and Ronald Reagan. Reagan felt instinctively that sanc- tions were a disastrous mistake, and suf- fered the indignity of Congress overriding his veto of the Comprehensive Anti- Apartheid Act in 1986. Bush, who claimed

he too always opposed sanctions and feared they could permanently damage the South African economy, waited and waited until the debate was exhausted, and only then signed the executive order terminating the measures. Bush waited again on formal recognition of the Baltic States, and will almost certainly wait for a European lead on Croatia. When Castro falls, his succes- sors in Havana will be welcomed into the new world order with a straight face and considerable self-congratulation in Wash- ington. The cautious US policy will have seen to have prevailed again.

George Bush has no instinctive gut feel for foreign policies, merely pragmatic objectives. His advisers admit he is far more comfortable dealing with John Major than Mrs Thatcher. He detests confronta- tion, and considers it a great achievement that he has never had a veto overridden by the Democratic majorities in Congress.

Current American policy lacks the ideo- logical underpinning of the Reagan era, or the lofty ideals about human rights which drove Jimmy Carter. Bush's statecraft reflects his background as a loyal public servant, a former CIA director, past US ambassador to the United Nations and ambassador to China. In his past roles he was known as an able manager, not an innovator, and as the President likes to put it himself, 'ninety per cent of life is just showing up.' He became president to tire- side, not to change the world, because 'I believe in the honour of it all,' as he once put it candidly, if a little pompously.

To be fair, he is honest about the limits to his ambitions. Even before his inaugura- tion, he suggested those who voted for him in 1988 'weren't looking for a radical shift', and promised he would 'build on some tremendous successes' of his predecessor. It was Reaganism without the doctrine, with the rough edges rubbed off, and most Americans love him for it.

The problem is that part of Mr Bush's 'He plays like an angel!' rhetoric is true. The world has changed, but George Bush has not. He consciously and deliberately displayed his scepticism towards Mikhail Gorbachev early in the administration — his press spokesman once referred to the Soviet leader as a 'drugstore cowboy' — but then he back- flipped to embrace him wholeheartedly and for too long, humiliating Boris Yeltsin in the process. He even went to Kiev in July, a fortnight before the failed coup, and toast- ed the Soviet Union — 'God bless the Sovi- et Union' — while lecturing the Ukrainian parliament on the dangers of 'suicidal nationalism'. Bush prefers personal con- tacts to ideas, special relationships strengthened by frequent telephone con- versations to concepts. He is slow and reluctant to change his personal loyalties. It is almost as though he has a pre-set quick- dial telephone in the Oval Office, and doesn't know which buttons to press to re- programme it.

He is good at managing crises, and it is only fortuitous that international events have lifted him above his most notable domestic failures. Saddam Hussein's inva- sion of Kuwait rescued him from last year's disastrous bipartisan budget agreement, when Bush traded his 'no new taxes' elec- tion promise for a shabby deal with Democrats in both houses.

His orchestration of the UN Security Council, drawing on all his diplomatic con- tacts and his experiences in New York, was remarkable, as was his courageous and nar- row victory in Congress to secure authority for the war in the Gulf. His conduct of the war partly made up for and concealed the catastrophic pre-war tilt towards Baghdad, though the invasion of Kuwait was an indictment of his brand of diplomacy and his dependence on bad State Department advice. Yet the military victory has not solved the problem. Gone is the breezy optimism expressed at the beginning of the year that Saddam is destined to be toppled. There were sound military reasons for not sending allied troops into Baghdad, but Saddam's survival mocks the self- congratu- lation of new world order enthusiasts.

George Bush need not be restrained by anything or anyone, which makes his fail- ures all the more frustrating. The notion that a resurgent American isolationism threatens to limit his freedom of action is a myth. Americans are suffering from some- thing much more straightforward than a desire to retreat: it is called a recession, and those on the Right and Left now nois- ily demanding the United States abandon its expensive foreign commitments will pipe down when the economy picks up. Ameri- cans desperately want to be offered a vision of their country's historic role post-Cold War, and are willing to act upon it. The question is whether it will be provided by George Bush, Old World Statesman.

Stephen Robinson is the Washington corre- spondent of the Daily Telegraph.