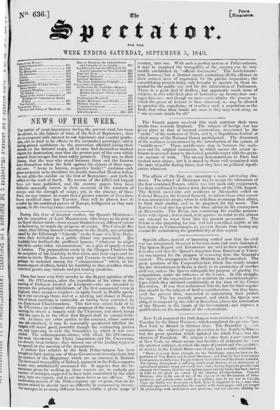 Tar matter of most importance during the present week has been the advent, in the fulness of time, of the first of September ; that day so pregnant with interest to our legislators and country gentle- men, and so fatal in its effects to the astonished partridges, which having gained confidence by the protection afforded during their inroads on the farmers; crops, all at once find themselves marked objects for destruction, now that the greater part of the corn which escaped their ravages has been safely garnered. They see, to their dismay, that the men who stood between them and the farmers have themselves taken the field against the objects of their espe- cial care. " Away to heaven, respective lenity!" exclaims each game-protector as he shoulders his double-barrelled Manton before the sun gilds the stubble on the first of September ; and forth he sallies to the work of death. No returns of the killed and bagged have yet been published, and the country papers have been hitherto unusually barren in their accounts of the numbers of coveys and the strength of wines ; yet, in the absence of these data, we may venture to assert that a greater nUmber of lives have been sacrificed since last Tuesday, than will be placed hors de mink's' by the combined powers of Europe, belligerent its they now appear,-in the ensuing twelve months.