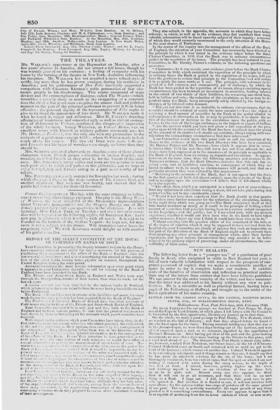 Wanmsca's appearance at the Haymarket on Monday, after a few years' absence in America, did not attract a full house, though he was warmly greeted on his entrance ; a feeling of sympathy with his losses by the burning of the theatre in New York, doubtless influencing his reception. Mr. WALLACK has not acquired a more refined style of acting, any more than he has grown younger, during his residence in America ; and his performance of Don Felix inevitably suggested a comparison whit CitattLEs KEMBLE'S noble personation of that cha- racter, greatly to his disadvantage. This coarse compound of stage devices and tile commonplaces of dialogue, called The Wonder—which resembles a comely about as much as the swaggering of a coxcomb does the air of a tine gentleman—requires the utmost skill and polished manner on the part of the principal performer to prevent it from being offensive : the personal dignity of the representative of Fe/i.c ought to give to its tinsel the appearance of true metal. Mr. WALLACK made it what he found it, vulgar and ridiculous. Miss II. Farm's drawling affectation of tenderness, and somewhat ugly as well as violent assump- tion of ill-humour in riehnte, confirmed the disagreeable impression of the whole hin•iness. Young Weos•rlin, as Co/ona Briton, was on excellent terwe e.•ith himself, as military gallants commonly are ; Isut Mr. Howl:, as Es ,1,-/ in!, was the only one with any pretensions to the manners of a gentleman—except Gibbie, whom O. Ssiern made to look much above his station. The two old Dons were mere buffoons ; and Lies:redo and his brace of' wenches were simply no better than they should be.

Mrs. STIP.I.TNG npla.nfed afterwards as Angeline,—one of those absurd characters 'chore French people soliloquize in broken English, and translate tl., iced French as they utter it, for the benefit of the audi-

ence. Mr. *11 .m snony smiles and tears are too genuine to need

such poor t•, end pathos as this gibberish ; and we hope to enjoy her sari, . 'Hy and fervent acting in a part more worthy of her talents.

Mrs. Ferzvoil • sl was only engagel for five nights last week : during which she /',!•;!; in the stage version of The Couglry Girl, and another do:noes-v. tier welcome was hearty, and showed that the public had 1, ,t relish for their old favourite.