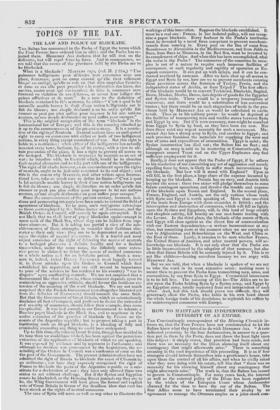 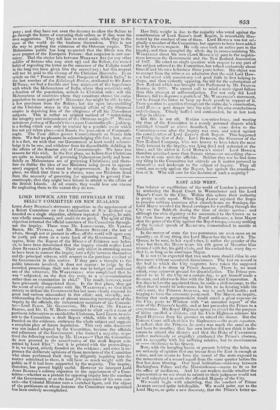 Page 12, 5 September 1840 — HOW TO MAINTAIN THE INDEPENDENCE AND INTEGRITY OF AN EMPIRE.
Close

HOW TO MAINTAIN THE INDEPENDENCE AND INTEGRITY OF AN EMPIRE.

Tux Constantinople cam respondent of the Morning Chronicle in- fbrnms us, that the Four Powers have not condescended to let the Sultan know what they intend to do With MEHEMET Au. '6A note delivered yesterday by the four Ambassadors, in answer to a ques- tion put to them by the Porte, does not throw time least light upon this subject : it simply states, that provision had been made, and there was no necessity for the Divan alarming itself about any contingency that might afterwards arise." There is something amusing in the cool impudence of this proceeding. It is as if four strangers should intrude themselves into a gentleman's house, take upon them the control of all his affairs, and when he civilly asked what they were doing with his estate, tell him that "there was no necessity for his alarming himself about any contingency that might afterwards arise." The truth is, that the Sultan has ceased to govern in Constantinople. For many years back, the internal as well as the external policy of the Divan has been regulated by the wishes of the European Court whose Ambassador chanced for the time to have the ear of the Sultan. The four Allies seem to have terminated their rivalry by an agreement to manage the Ottoman empire as a joint-stock corn- pany ; and they have not even the decency to allow the Sultan to go through the forms of executing their orders as if they were his own suggestions. They tell him to stand aside, while they in the eyes of the world do the business themselves. This is not the way to prolong the existence of the Ottoman empire. The Mahometan public has long suspected that the Divan was the were puppet of the European Powers : that suspicion is now cer- tainty. Had the choice lain between Manama. Aro (or any other soldier of fortune who may start up) and the Sultan, the rooted habit of regarding the latter as the successor of the Caliphs would in the long run have given him the ascendancy ; but this respect will not be paid to the viceroy of the Christian Monarchs. In an article on the " Present State and Prospects of British India," in the last number of the Edinburgh Review, attributed to Sir JOHN M‘NEILL, we find a forcible and true statement of the impatience with which the Mahometans of India, where they constitute only a fraction of the population, submit to Christian rule : will the Mahmuctans of countries where they constitute almost the entire population he more patient ? MEHEMET An might be able to take a few provinces from the Sultan ; but the open intermeddling- of the Christian states in the internal affairs of the Ottoman empire is depriving him of the allegiance of all his Museulman subjects. This is rather an original method of " maintaining the integrity and independence of' the Ottoman empire !" We en- tertain no jealousy of Russia's views upon Constantinople : jealousy, is a feeling which can only be excited by a possible event which has not yet taken place—and Russia has possession of Constanti- nople. The Four Allies govern Constantinople as Russia bids them. We feel no pleasure in acknowledging this filet ; but, since it is a fact, we wish that our Government at least would acknow- ledge it to be one, and withdraw from its discreditable dabbling in the affairs of the Russian city of Constantinople. We have two reasons for this wish. In the first place, we believe that Christians ' are quite as incapable of governing Mahometans justly and bene- ficially as Mahometans arc of governing Christians ; and there- fore we dislike the idea of our Ministers being (even in appear- ance) engaged in what must be misgovernment. In the second place, we think that there is a chance, were our Ministers freed from. the necessity of governing (or appearing to govern) Con- etantmople, that they might have leisure to attend to the affhirs of the British Islands. At all events, they would lose one excuse for neglecting them to the extent they do now.