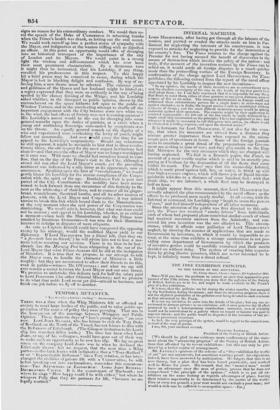 SIR—Will you have the goodness to correct an error that appeared in your journal of the 15th ultimo, wherein you state that the galleries of the Society of British Artists are to be let, and might be made available to Mr. PARR'S plan of a free exhibition.

It is true, that the galleries are let during the winter months, but occupied by the Institution during the season; and from its advancing progress, there is not the slightest probability of the galleries ever being devoted to such is scheme as that iulvocated by Mr. PARR.

It is not my intention to enter into the details aids plan ; but any one ac- customed to arrange pictures in an exhibition, will at once perceive the ill effect produced by such a heterogeneous combination : moreover, inen of celebrity would not be contributors to a gallery where no regard or honour was paid to superior talent ; and the public would be disgusted at the intrusion of bad pic- tures in prominent sit uations.

In het, tile very principle of the system, would be regard to the moniesl man, instead of the man of genius. arn, Sir, your obedient servant,

President of the Society of British Artists.

[We should be glad to see evidence more confirmatory of the state- ment about the "advancing progress" of the Society of British Artists, than that alliirded by its recent exhibitions : but this can only be pro- duced by a better course of management. Mr. LATILLA'S opinions of the scheme of a " free exhibition for works of art " are not :arguments, but assertim is wanting. proof: his objections, inn d id, have been answered by anticipation. I le forgets that this is no new theory, but a plan that has been Ilmnal practicable, and worked well in Rome for years. Ins remark that the " monied man" would have an advantage over the man of genius, proves that he does not comprehend "time principle of the system ;" which is to put all ex- hibitors on the same footing as regards advantages of place, leaving their relative superiority to be determined by the merits of the works. Five or even ten pounds a year rent would not exclude a poor man; 'tot would a rich ORO be suffered to monopolize space..-1.j