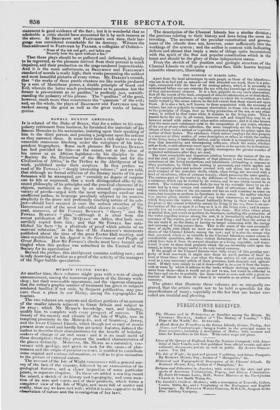 It is related of the Duke of SULLY, that for a solace to his corn. pulsory retirement from business, he furnished the materials of is famous Memoirs to his secretaries, insisting upon their speaking of him in the third person, and passing a judgment upon his actions as they narrated them. It must have been a rich sight to see the venerable statesman blushing under the eulogiums of his inde- pendent biographers. Some such pleasure Sir POWELL I3CXTON has had provided for him—at the outset, not at the close of his career as an African legislator—by his disciples in the " Society for the Extinction of the Slave-trade and for the Civilization of Africa," in the Preface to the Abridgment of his work, published under their auspices. In that preface we read of Sir FOWELL'S "deeply interesting volume ;" and are told, that althouet no formal criticism of the literary merits of his per- formance will be attempted, yet " certainly no degree of surprise can be felt or expressed, that a work distinguished alike by the sound philosophy of its principles and the practical character of its objects, sustained as they are by an unusual copiousness and variety of proofs—urged with the most' scrupulous candour and unaffected pathos, in language peculiarly adapted by its massive simplicity to the grave and profoundly touching nature of its sub- ject—should have secured at once the serious attention of the Government and of the most influential classes in society." We read, moreover, of Sir FOWELL BUXTON'S " theory " and Sir POWELL BUXTON'S "plan,"—although it is clear from the recent publication of Mr. M'QUEEN on Africa, that both were servilely copied from him ; and that Sir FOWELL has esta- blished his facts "by a plenitude of proof which admits of no material refutation," in the face of Mr. JAMIESON'S statements published about the time of the great Exeter Hall meeting, and since republished in his Appeal to the Government and People of Great Britain. How Sir FOWELL'S cheeks must have burned and tingled when this preface was submitted to the Council of the Society for its approbation ! Beyond the preface, this abridgment contains nothing new ; and is only deserving of notice as a proof of the activity of the managers of the Niger bubble speculation.