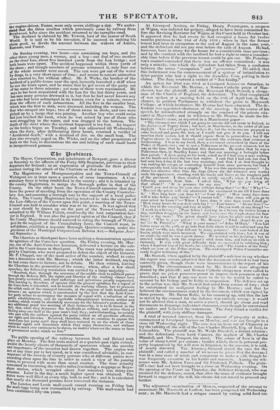 On Sunday evening, two boats—one containing ten boys, and the

other three young men, a woman, and a boy—ran foul of one another on the river Lea, about five hundred yards from the Lea bridge ; and both boats were upset. The accident happened within three yards of the shore ; and though niunbers of persons witnessed it, only four out of the whole number were saved. The rest were got out of the water by drags, in a very short space of time ; and means to restore animation were resorted to, but without effect. Mr. J. Wicks, the brother of the landlord of a public-house near the spot, instantly launched a skiff when he saw the boats upset, and he states that lie got seven of the party out of the water in three minutes ; yet none of them were reanimated. He says he has been acquainted with the Lea for the last thirty years, and has seen many persons drowned in it, but that he had never known any one who had been submerged in its waters, even for a minute, recover from the effects of such submersion. All the five in the smaller boat, which was the first to sink, were drowned, including the woman. The four who escaped are boys ; two of them swain to shore, and two were picked up by a barge that was passing. Another boy who could swim had just reached the bank, when he was seized by one of those who were struggling in the water, and was dragged to the bottom. The depth of the river where the accident happened is ten feet. An inquest on the bodies began on Tuesday, and was adjourned till Wednesday ; when the Jury, after deliberating three hours, returned a verdict of "Accidental death," with a deodand of 20s. on the small boat. The Jury also strongly urged on Mr. Wicks, and on the other proprietors of boats on the Lea, to discontinue the use and letting of such small boats to inexperienced persons.