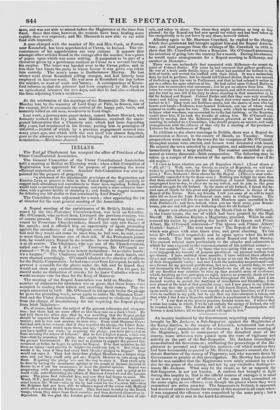 A Repeal meeting of the parishioners of St. Bride's, Dublin,

con- vened by the two Protestant Churchwardens, was held on Saturday, Mr. O'Connell, who arrived from Liverpool the previous evening, was of course present. The circumstance of a Repeal meeting being con- vened by Protestant Churchwardens, formed the only new feature of his speech ; and it afforded hitat an opportunity of again protesting against the ascendancy of any religious creed. As some Protestants had said they would not conic to meet him, he had now, he said, coma to meet them and become one of their tail. If the Protestants joined him, he would carry Repeal in six months: he was determined to carry it at all events. The Chairman, who was one of the Churebwardens, called out—" So am I, if I can ! " Thereupon, Mr. O'Connell ex- claimed—" Well, Sir, that is an honest declaration : let us shake hands ; it's a bargain." The Chairman and O'Connell then shook hands, and were cheered accordingly. O'Connell alluded to the election of officers for the Dublin Corporation : he bad come over from Liverpool, he said, to prevent a scramble for the places under the bill, and he hoped they -would not show any exclusiveness in the elections. For his part, he should make no distinction of creeds ; for he knew Catholics whom he would no more vote for than for the King of Hanover.

The meeting of the Repeal Association was held on Monday. The number of claimants for admission was so great, that three hours were occupied in reading their letters and enrolling their names. The re- ceipts amounted to 143/. Mr. O'Connell in his speech broke the pledge he gave the preceding week, never again to notice Mr. Sharman Craw- ford and the Ulster Association. He endeavoured to vindicate himself from the charge of inconsistency for not requiring the Repeal pledge from Irish Members— He, of course, had been the subject of the grossest calumnies and vitupera- tion, ; but these had no more effect on him than rain on a duck's back. He had told them the other day, that he was unwilling that the Repeal pledge should be required from Members of Parliament during the present Adminis- tration ; and he was now anxious to state why. From what Sharman Craw- ford had said, it was evident, that if they required the pledge, the Ulster Asso- ciation would turn round upon them, and say, Behold what you have done; you have spoiled our work : by requiring the pledge, you have prevented us from securing the return of Liberals.' But he had a higher reason, which was this—that by requiring the pledge they might lose some of the supporters of the present Government. He was now as anxious to support the preseut Go- vernment as before he Ingan to agitate fur Repeal. If by that agitation he did them an injury—and possibly he might—be could not help it. But what use would it be, even if they had every Irish Member pledged to Repeal? That would not carry it. They had forty-four pledged Members on a former occa- sion, and yet they could only get ens English Member to vote along with them. Requiring the pledge was not the way to carry it. That could only be done by having the unanimous opinion of the people of Ireland declared in favour it, or if not the unanimous, at least the general opinion. Repeal was progressing with greater rapidity than he had foreseen, and as great as he could wish, nob, ithstanding the efforts of Sharman Crawford and the London press. The press first ridiculed him, and now they had begun to scold. Mr. Vara, M.P., had attacked hint in his Wieldy Chronicle. Now be would re- mind honest Mr. Ward—who, by the by had voted for the Coercion Bill—that the Belgians had not been able to obtain a repeal of the union with Holland until after a refusal by the Parliament. They had been invaded by the Dutch troops, whom they drove from their country, and then declared themselves in • dependent. He was glad the London press had abandoned their tone of dal- cule, and taken to abuse. The abuse they might continue as long as they pleased; for the Repeal cry had now spread too widely and had been taken up too energetically to be put down by any abuse, however violent.

Alluding again to Mr. Sharman Crawford, he replied to the charges which that gentleman had brought against him and the Repeal Associa- tion ; and read passages from the writings of Mr. Crawford in 1833, to show that Mr. Crawford was then a Repealer. Mr. O'Connell announced his intention of going into the country for a month. During his absence, he would make arrangements for a Repeal meeting in Kilkenny, and another in Munster— There was one melancholy fact connected with Kilkenny—he meant the letter of Colonel Butler. For years he had esteemed that gallant gentleman, He was of a truly noble family, many of whom had perished for Ireland in the field of battle, and wetted the scaffold with their blood. It was a melancholy duty he had to perform; but he should tell Colonel Butler, that he was accused of trafficking upon his vote in Parliament, and that he had refused it unless be got two offices for some relatives of his. Ile had called upon Colonel Butler to allow him to contradict that statement ; but he got no answer from him. The, letter he wrote to him he put into the newspapers, and still it received no reply; and the fact he now felt it his duty to state, standing in that association as he did for Ireland and Repeal. Colonel Butler said that they were only enrolling names and taking money ; but did he forget that every name had a man at tached to it ? They were not fictitious names but the names of men who had hearts and hands—lrishmen, true-hearted Irilmen, not one of whom would consent to traffic upon his vote. The money, with which he expressed a wish to know what was done, was accounted for to the last farthing; as the Secretary would show him, if he took the trouble of asking him. Mr. O'Connell con- cluded by moving that the Kilkenny address, presented at the last weekly meeting, be referred to a Committee, who should prepare an answer, and make arrangements with the citizens of that city for a meeting of the province of Leinster for the furtherance of Repeal.

In addition to the above meetings in Dublin, there was a Repeal de- monstration at Navan, in the county of Meath, on Tuesday. Great preparations were made in the town for the reception of Mr. O'Connell; triumphal arches were erected, and houses were decorated with laurel. He entered the town attended by a procession, and addressed the people immediately from a large platform. The number assembled is esti- mated at twenty thousand—Irish computation. The following may be taken as a sample of the manner of the speech; the matter was cf the eId staple— "I want to know whether you are all Repealers there ? (Loud shouts of " All, all ! ") Well, now, my friends, as you're all Repealers, we will com- mence by giving three cheers for the Queen. (Three deafening cheers were given.) Now, Irishmen ! three cheers for the Repeal. (Thu was most enthu- siastically responded to by the dense mass.) Nothing. can delight nie more thaa that there should be such a glorious assemblage at honest .Meath Repealers congregated here to-day, to cheer me on my arrival, and to join in the great national struggle for old Ireland. In the name of old Ireland, I thank the ho- nest men of Meath for this great and glorious manifestation in favour of the Repeal of the Union. Now, my friends, I tell you none of us will be much older till we have the Irish Parliament once more in College Green. The oldest amongst you will live to see the Irish Members again assembled in the Irish Parliament : and then, indeed, when you see them enter, your Senate- house, you can and will give one deafening cheer for old Ireland.'

A dinner was afterwards given by the Meath Club to Mr. O'Connell, in the Court-house, the use of which had been granted by the High Sheriff. Mr. Nicholas Boylan, a Magistrate, presided. When he com- menced his duties by proposing the health of the Queen and Prince Albert, Mr. O'Connell reiterated—" The Queen and Prince Albert! Hurrah hurrah !" The next toast was " The Repeal of the Union ;" which was given with nine times nine, and great cheering. To this toast Mr. O'Connell responded ; and he again spoke when his health WAS drunk. The first speech was about Repeal and Lord Stanley. The second related more particularly to the attaches and calumnies to which he was exposed in the commencement of his political career- " I was assailed, be :aid, " by those who were acting with me : my motives were impugned, my honesty of purpose questioned, my personal motives were questioned. I have outlived those assaults ; I have outlived those efforts of minor and would-be leaders; I have lived to see at an end the little malignity of their disappointed vanity : and now I hold the leadership unquestioned—not as a favour the my personal gratification, but as a duty, a sacred duty, to work out incessantly the liberty and glory of Ireland—to me all my energies, that all my faculties nuty combine to raise up that peaceful army of confessors, which, breaking no law, outraging no right, injures no property, sheds not one drop of' blood—that will extend its charms throughout the land. And I am deemed worthy to preach the doctrines of conciliation and friendship; I am now placed at the head of that peaceful army; and I now pause in my address, not to say that the people dread that I will desert Repeal, because I never again could be confided in if I were capable of such base desertion, or if I even were to vacillate in my path, but to say that my determination is taken, and that while 1 live I am a Repealer, until there is a parliament in College Green. * * * I say that at the present juncture Ireland wants me. I believe that a crisis has come, in which, if we do not embody the energy of Ireland, she will be crushed for ever. The Reform Bill will be repealed ; Emancipation will become a dead letter; all we have gained will again be lost."