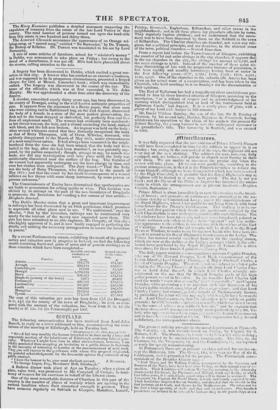 Page 5, 5 September 1840 — A forgery has been discovered in Dublin, which excited a
Close

A forgery has been discovered in Dublin, which excited a

great sen- sation in that city. A brewer who has carried on an extensive business, and was supposed to be in prosperous circumstances, presented a forged cheque for 520/. at Messrs. Latouehe's bank ; which was immediately cashed. The forgery was discovered in the course of the day. The name of the offender, which was at first concealed, is Mr. John Murphy. He was apprehended a short time after the discovery of the forgery.

A murder, committed nearly thirty years ago, has been discovered in the county of Donegal, owing to the well-known antiseptic properties of peat. It appears from the statement in a Derry paper, that some men who were cutting turf in Ballikinard bog, on the 21st Lgust, discovered the body of a female in a state of the most perfect preservation, the

i flesh not n the least decayed or shrivelled, but perfectly firm and free from all unpleasant smell. The woman had evidently been murdered ; as her throat was cut, the hair, and a riband encircling the head, stained with blood, and the left arm broken. An inquest was held on the body ; when several witnesses stated that they distinctly recognized the body as that of Betty Thompson, wife of Owen M'Swine, deceased, who suddenly disappeared in the Month of May 1811, under circumstances of a most suspicious nature. It had always been rumoured in the neigh- bourhood from the time she had been missed, that the body had beers buried in the bog, after she had been murdered, as was generally sup- posed, by the parties suspected ; though, strange to say, no search was made, nor did any investigation ever take place until the body was accidentally discovered near the surface cf the bog. The features of the woman had apparently: undergone not the least change by time, and even her clothes were uninjured. The Jury found—" That the body was the body of Betty Thompson, who disappeared in the month of May 1811 ; and that she came by her death in consequence of a wound inflicted on her throat with some sharp instrument, by some person or persons unknown."

The Commissioners of Excise have determined that apothecaries are not liable to prosecution for selling spirits of wine. This decision was elicited by an attempt on the part of the non-licentiates of Drogheda to prosecute the licentiates for vending a few ounces of that article.— Drogheda Journal.

The Dublin Monitor states that a great and important improvement in railways has been discovered by an Irish gentleman, which promises to supersede all other plans now in use. " We understand," says the Monitor, "that by this invention, railways can be constructed very nearly for the interest of the money now expended upon them. The plan has been submitted to an able engineer, Mr. Gregory, of this city ; who highly approves of it, and is now busily engaged in perfecting the details, and making the necessary arrangements to secure the invention by patent."