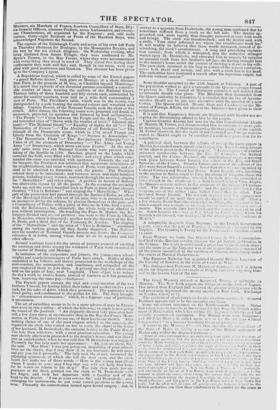 Some disorder occurred on the 25th August, at Valencia. A

mientos should not be put into execution until the meeting of a new Cortes. The Queen refused. Messrs. Onis and Cabello—one the Mi- nister of Foreign Affairs, the other of the Interior—have given in their resignation.

It is said that Espartero's friends are displeased with him for not ac- cepting the Dictatorship offered to him by the people. Captain-General Aida= had sent for the first Constitutional Aleade of Madrid, N. Ferrer, and recommended him to convoke no more pub- lic meetings, because of their endangering the tranquillity of the capital. 31. Ferrer observed, that the eight or ten thousand good trotips concen- trated in Madrid ought to be considered a sutliaicat protection for its inhabitants.

A political duel, between the editors of two of the party papers in Madrid, has excited much attention in thatt'capitel. The ;b1lowing account of the affair is given in the Freech papere. In coesequenee of a rather animated. controversy between the —ea /7,1 Contecchu, the Radical journal, and the Curreo Naciona!, the constitutional organ, a meeting took place between Senor Isnardi, the editor of the Leo, and Senor Sartorius, of the Cerro). General Infante and one of the editors of the Leo were Senor Isnardi's secends : Senor Sartorins wes accompanied by Colonel Cordova and Senor Las I leres. Senor lsnardi, Mho, according to the custom in Spain, ought to leave the choice of weapons, chose the sabre. The two adversaries, attended by their se,: ,• As. proceeded at three o'clock in the afternoon to a field situated leaded Vista Alegre,

the Queen's country retreat. in tl.e envirens of the i f Caraban- duel. The distance was measured: and the paees, lots for the weapons, one of the sabres being -.tether tlu..T! other. Fate fitt-oured Senor Isnardi. The eels d, gatrement should be carried on until they nee, tht After a

A telegraphic despatch from Bayonne, in the French Government papers. states that the port of Pus-aces is completely evacuated by the English. The Quadruple Treaty for the Peniesela hes therefore ceased to exist.

From Warsaw we learn that Generel Coant de Wile Commander- in-Chief of the Russian cavalry, died am the 2d instant. at Orianda, in the Crimea. his death is considered a art et loes to the Russian army; and the more so as the Emperor was al•out to give him the command of all the forces assembled in the environs of lolesse, immediately under the orders of 3Iarehal Paskewitseh.

The Emperor Nicholas has appointed General Nitikia laspector of the Cavalry of Reserve, in the room ot' Count de Witt,

The distinguished Professor N. Muller. of Gottingen. divi at Athens on the 1st August, of a fever caught at Delphi, caused ht. exposing him- self to the intense heat of the stun.