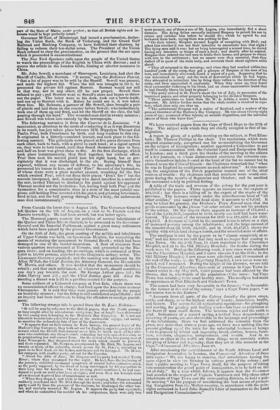 A report is given of a public meeting on the

subject, at Port Eliza- beth; Mr. Thomas Phillips in the chair. The resolutions, which were adopted unanimously, comprised one for memorializing the Governor on the subject of immigration ; another appointed a Committee to put itself in communication with the Colonial Land and Emigration Board in London ; and a third gave the thanks of the meeting to the editors of a few journals, to whose disinterested exertions the colonists con- ceive themselves indebted—and at the head of the list we cannot but be pleased to see the Colonial Gazette : the Chairman remarked that " when he was in England he could procure no such advocates." At this meet- ing, the emigration of the Dutch population seemed one of the chief sources of' trouble : the chairman said that numbers more would emi- grate during the months of September and October; and he ascribed the movement solely to political feeling.

The smallpox is said by the papers to be " almost completely at an end," and the farmers are told that they need no longer fear coming to Cape Town. On the 2oth June, 15 cases remained iu the Cheyennes Hospital, and 22 in the Old Military Hospital ; the deaths during the week wore II. Daring the following week, 2 new eases were admitted into the Cheyennes hospital, and 9 cases remain( d on the 27th ; in the Old Military Hospital, 3 new cases were admitted, and 13 remained at the end of the week ; ia the Tygerberg Hospital, 4 new cases were ad- mitted, and 7 remained. During the height of the disorder, we are told by the Commacreiet/ Akerliser, thousands of persons in Cape Town la- boured under it—by May 20th, 6,000 persons had been affected by the disease, that is, oneletatli of the population ef the town : but Cape Town was returning to its usual healthy state. The smallpox had made its appearance at Port Elizabeth and Graham's Town.

" Accounts from all parts of the Colony describe the grass crops, cattle, and sheep, as ia the highest state of beauty, luxuriance, health, and fatness. The season for all ogricultural operations—for ploughing and sowing, for grazing and feeding sock—bas been as propitious as the hurt of man could desire. The heavens rejoice end the earth is glad. Indications of a second spring, a revival from despondency, it renewing of youth, are also observable in the language and proceedings of the inhabitants. Sluice we first addressed the colonists from the press, now more than sixteen years ago, we have seen nothing like the present girding up ef the loins for the substantial bnsiness of beings born to procure by labour and ingenuity, bread, clothes, houses, furni- ture, comforts, eleganeies, independence, and wealth. And in no country or clime in the world are these things more certainly within the grasp of labour and ingenuity, titan they are at this moment at the Cape."—Commercial Adrertiser, June '20.

After mentioning the establishment of the Smith African Land and Emigration Association in London, the Commercial Advertiser of June 20th says—" We are happy to observe, that associations having the same object in view are forming in various parts of the colony ; and that a public meeting in Cape Town itself', for the purpose of taking into consideration the grand point of immigration, is to be held on the 1st of July." By a note which follows, it appears that the Governor had acceded to the request of Captain Vanreencn and fifty-three other

inhabitants of Cape Town and the surrounding districts, to hold a pub- lic meeting " for the purpose of considering the best means of promot- ing Emigration from the Mother-country, in accordance with the prin- ciples contained in Lord John Russell's letter of instruction to the Land and Emigration Commissioners."