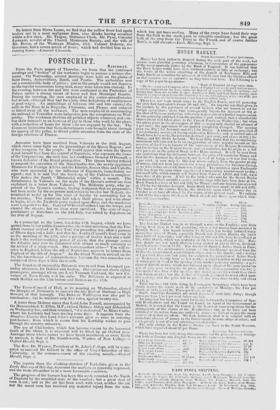 Page 9, 5 September 1840 — The Town-Council of Hull, at its meeting on Wednesday, elected
Close

The Town-Council of Hull, at its meeting on Wednesday, elected

the Marquis of Normanby to succeed the late Earl of Durham as High Steward of that borough. The Duke of Wellington was also put in nomination ; but he received only five votes, against twenty-six.

A letter from Melrose states that Lord John Russell, accompanied by the Honourable J. C. Elliot, M.P., visited Melrose Abbey and Abbotsford on Wednesday last, and then returned, "it is understood," to Minto Castle, where his Lordship had been staying some days. It appears from the DuntAies Courier that Lord John's servants gave no name in ordering post-horses ; from which it seems that his Lordship wishes to pass through the country unknown.

The see of Chichester, which has become vacant by the lamented death of Dr. Otter, it is expected will be filled by an Oxford man. Amongst those whose names we have heard mentioned as most likely to succeed, is that of Dr. Shuttleworth, 'Warden of New College.— Oxford Muhl, Sept. 5.

The Rev. Dr. Wynter, President of St. John's College, will be nomi- nated to succeed Dr. Gilbert in the office of Vice-Chancellor of this University, at the commencement of the ensuing month.— ()Viol Herald, Sept. 5.