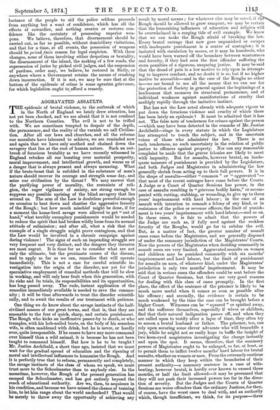 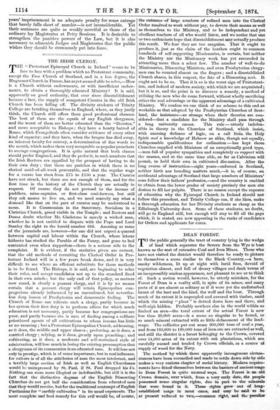 griepidemic of brutal violence, to the outbreak of which n the North of England we lately drew attention, has not yet been checked, and we are afraid that it is not confined to the Northern Counties. The evil is not to be trifled with. We are sometimes tempted to despair of the depth, the permanence, and the reality of the varnish we call Civilisa- tion. After all our laws and churches, and all the reforms our moralists have laboured to achieve, we are reminded now and again that we have only soothed and chained down the savagery that lies at the root of human nature. Such an out- break of ferocious brutality as we have recently witnessed in England rebukes all our boasting over material prosperity, moral improvement, and intellectual growth, and warns us of a danger that is always present and always menacing. What if the brute-beast that is enfolded in the substance of man's nature should recover its courage and strength some day, and seize our civilisation by the throat We may answer that the purifying power of morality, the restraints of reli- gion, the eager vigilance of society, are strong enough to suppress any possible uprising of the blind savagery that lies around us. The arm of the Law is doubtless powerful enough on occasion to beat down and chastise the aggressive ferocity of the Bough; but how much mischief might be done, if for a moment the home-bred savage were allowed to get "out of hand," what terribly exemplary punishments would be needed to reduce the spirit that had broken wildly loose from its normal attitude of submission ; and after all, what a risk that the example of a single struggle might prove contagious, and that the Law would be involved in a chronic campaign against daring violence The signs of such an impending struggle are very frequent and very distinct, and the dangers they threaten are most urgent. It is time for us to consider what are not only the ultimate, but the proximate causes of the disease, and to apply as far as we can, remedies that will operate immediately. This is not a case for careful scientific in- vestigation into the origin of the disorder, nor yet for the speculative employment of remedial methods that will be slow in working, and will only bear fruit when this generation, with its risks and its trials, its responsibilities and its opportunities, has long passed away. The rude, instant application of the remedies immediately available is needed to save the commu- nity; it will be time afterwards to treat the disorder scientifi- cally, and to await the results of our treatment with patience.

One thing we do know about the savage instincts of the half- civilised masses of our great towns, and that is, that they are amenable to the fear of quick, sharp, and certain punishment. The Rough who kicks an inoffensive passer-by to death, or who tramples, with his hob-nailed boots, on the body of his senseless wife, is often maddened with drink, but he is never, or hardly ever, quite irresponsible. If he ceases to have any more command over himself than a wild animal, it is because he has not been taught to command himself. But how is he to be taught? Mr. Justice Archibald, a short time ago, insisted that we must wait for the gradual spread of education and the ripening of moral and intellectual influences to humanise the Rough. And it is perfectly trite that to reform, permanently and completely, the savage instincts of the class of whom we speak, we must trust more to the Schoolmaster than to anybody else. In the meantime, however, the Rough of the present generation has escaped the Schoolmaster, and has got entirely beyond the reach of educational authority. Are we, then, to acquiesce in his condition, and because we have missed the chance of training him, to let him range about the world unchecked? That would be merely to throw away the opportunity of achieving any result by moral means ; for whatever else may be saved, if th Rough should be allowed to grow rampant, we may be certain that the humanising influences of education and religion will be overwhelmed in a surging tide of evil example. We know that we can make the Rough afraid of breaking the law. Every brutal outrage that now goes unpunished or escapes with inadequate punishment is a centre of contagion ; it is imitated with emulation by scores, or it may be hundreds, who would have been warned off the boundary between wantonness and ferocity, if they had seen the first offender suffering the stern penalties of a rigorous, unsparing justice. It may be said that the dread of pain is a low motive to rely upon in attempt- ing to improve conduct, and no doubt it is so, but if no higher motive be accessible—and in the case of the Roughs no other is—we are bound to use all the means that we can use for the protection of Society in general against the beginnings of a lawlessness that menaces its structural permanence, and of individual weakness against manifestations of cruelty that multiply rapidly through the imitative instinct.

But has not the Law acted already with adequate vigour to put down the ferocious violence and cruelty of which there has been lately an epidemic It must be admitted that it haa not. The false note of tenderness for crimes against the person —which may have been detected in the remarks of Mr. justice Archibald—rings in every statute in which the Legislature has attempted to touch the subject, and in the uncertain voices of those who administer the law. There is no such tenderness, no such uncertainty in the relation of public justice to offences against property. Nor can any reasonable complaint be made that the graver felonies are likely to meet with impunity. But for assaults, however brutal, an inade- quate measure of punishment is provided by the Legislature, and both Judges and Magistrates in administering the law generally shrink from acting up to their full powers. It is in the shape of assaults—either " common " or "aggravated "- that most of the recent outrages have come before the Courts, A Judge or a Court of Quarter Sessions has power, in the case of assaults resulting in "grievous bodily harm," or accom- panied with cutting, stabbing, or wounding, to give up to three years' imprisonment with hard labour ; in the case of an assault with intention to commit a felony of any kind, or in resistance of the police or revenue officers, the limit of punish- ment is two years' imprisonment with hard labour,—and so on. In these cases, it is fair to admit that the powers of the Judge are such as, if fully used against the reckless ferocity of the Roughs, would go far to subdue the evil. But, as a matter of fact, the greater number of assault eases come before the Magistrates, and are generally disposed of under the summary jurisdiction of the Magistrates' Courts. Now the powers of the Magistrates when deciding summarily in assault eases are very limited. Aggravated assaults on women and children may be punished summarily with six months' imprisonment and hard labour, but the limit of punishment for assaults on men, of whatever kind, under the Magistrates' jurisdiction is only two months' imprisonment. It may be said that in serious cases the offenders could be sent before the Court of Quarter Sessions, but there are very good reasons for dealing with this class of cases promptly. In the first place, the effect of the sentence of the prisoner is likely to be much more useful when it comes as soon as possible after his offence ; and secondly, the evidence is certain to be much weakened by the time the case can be brought before a higher Court. Witnesses can be "squared " or spirited away, and the sufferers themselves, especially if wives or children, find that their natural indignation passes off, and when they are called upon to testify after a lapse of time, they often try to screen a brutal husband or father. The prisoner, too, can rely upon securing some clever advocate who will bemuddle a jury, while he might not so easily hope to baffle the insight of two keen-eyed magistrates investigating the charge instantly and upon the spot. It seems, therefore, that the summary powers of Magistrates ought to be enlarged, so far, at least, as to permit them to inflict twelve months' hard labour for brutal assaults, whether on women or men. From the extremely cautious manner in which they keep within the boundaries of their present authority—a summary sentence in a case of wife- beating, however brutal, is hardly ever known to exceed three months, or half the limit allowed—it may be presumed that they will not push their increased powers too far in the direc- tion of severity. But the Judges and the Courts of Quarter Sessions are worse offenders than the ordinary Justices, for they, of course, have the worst cases to deal with, and an authority which, though insufficient, we think, for its purpose—three years' imprisonment is no adequate penalty for some outrage that barely falls short of murder—is not inconsiderable. Yet their sentences are quite as weakly merciful as those of the ordinary lay Magistrates at Petty Sessions. It is desirable to strengthen the punitive powers of the Law, but it is also necessary to admonish Judges and Magistrates that the public wishes they should be strenuously put into force.