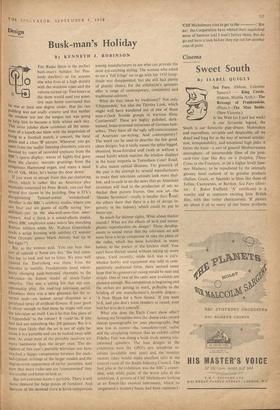 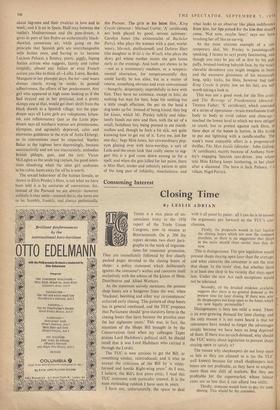 IF the West (as I said last week) is our favourite legend, the South is our favourite pipe-dream. Malevolent and marvellous, enviable and despicable, all we dread and long for in the way of sensual satisfac- tion, irresponsibility, and emotional high jinks, it forms the basis—a sort of general Mediterranean atmosphere—of innumerable films of the post- card-view type like Boy on a Dolphin, Three Coins in the Fountain, or (at a higher level) Sum- mer Madness; to be repudiated by the intensely gloomy local outlook of its genuine products (Italian, Greek, or Spanish) in films like those of Fellini, Cacoyannis, or Bardem. Sea Fury (direc- tor: C. Raker Endfield; 'A' certificate) is a worthy and at moments exciting little British film, with that rather characteristic 'B' picture air about it of so many of our home products, abouttug-men and their rivalries in love and in work; and it is set in Spain. Half-way between the realist's Mediterranean and the pipe-dream, it gives its port of San Pedro an authentically black- shawled, censorious air, while going on the principle that Spanish girls are interchangeable with Italian ones, and having as its heroine Luciana Paluzzi, a flouncy, pouty, giggly, lisping Italian actress who suggests, faintly and rather insipidly, almost any Italian or even French actress you like to think of—Lollo, Loren, Bardot, Mangano in her plumper days, the lot—and wears dresses clearly trying to outdo, in general adhesiveness, the efforts of her predecessors. Any girl who appeared at high noon looking as if she had strayed out in her petticoat, and a pretty skimpy one at that, would get short shrift from the black shawls in a Spanish village; but the pipe- dream says all Latin girls are voluptuous, kitten- ish, and inflammatory (just as the Latin pipe- dream says all northern women are promiscuous, olympian, and agreeably depraved, calm and enormous goddesses in the style of Anita Ekberg), so its conventions must be respected. Stanley Baker as the tugboat hero depressingly, because unattractively and not too inaccurately, embodies British phlegm, guts, and the rest; Victor McLaglen as the senile tug captain, his good inten- tions dissolving when the idiot girl undresses in his cabin, hams away for all he is worth. • The sexual behaviour of the human female, as shown in Elvis Presley's films, is not what we have been told it is by centuries of convention; for, instead of the Pursued we are always—however unlikely it may seem—assured she is, she turns out to be, humbly, frankly, and always pathetically, the Pursuer. The girls in his latest film, King Creole (director : Michael Curtiz; 'A' certificate), are both played by good, serious actresses : Carolyn Jones (the existentialist of Bachelor Party), who plays the woman with a past, world- weary, life-sick, disillusioned; and Dolores Hart (the daughter in Wild is the Wind), who plays the dewy girl whose mother insists she gets home early in the evenings. And both are shown to be —not as a momentary madness, or a tempera- mental aberration, for temperamentally they could hardly be less alike, but as a matter of course, something obvious and even conventional —hungrily, desperately, unpridefully in love with him. They have no existence, except in him; do nothing but wait for him; hope for nothing but a little rough affection, the pat on the head a dog looks up for. Instead of being kissed, they beg for kisses, which Mr. Presley sulkily and reluc- tantly hands out now and then, with the air of a small,.fastidious boy being pressed to eat marsh- mallow and, though he feels a bit sick, not quite knowing how to get out of it. `Love me, just for one day,' begs Miss Jones, her extraordinary pop- eyes glazing over with hero-worship, a sort of Leda-and-the-swan look that really seems to sug- gest this is a god come down among us for a spell; and when she gets killed for her pains, there is Miss Hart, tender and infinitely patient in spite of the long past of infidelity, nonchalance, and from him, her lips poised for the kiss that doesn't come. 'Not now, maybe later,' says our hero, brushing her off like an earwig. As the mostextreme example of a con• temporary idol, Mr. Presley is (sociologicallY speaking, I hasten to say) pretty fascinating, and though you may be put off at first by his pale. puffy, bruised-looking babyish face, by the weary cherubic decadence you might imagine in Nero, and the excessive greasiness of his excessively long, spiky locks, his films, however bad (and King Creole is pretty low on his list), are well worth taking a look at. This was not a good week for the film critic; and The Revenge of Frankenstein (director: Terence Fisher; 'X' certificate), which consisted of a series of operations—brain-transfusions from body to body in vivid colour and close-up— reached the lowest level to which we were obliged to crawl; but to protest against such films, in these days of the boom in horror, is like trying to put out lightning with a candle-snuffer. The week's most enjoyable effort is a preposterous thriller, The Man Inside (director: John tilling; 'A' certificate), mainly because of Anthony New- ley's engaging Spanish taxi-driver, into whose taxi Miss Ekberg keeps lumbering, in her chase after a diamond. The hero is. Jack Palance, 1: c villain, Nigel Patrick.