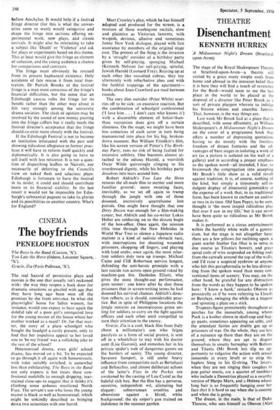 Grazie, Zia (Paris Pullman, 'XI The real hazard of permissive plays and movies is the one that usually isn't reckoned with : the way they reopen a back door for dramatic situations so gnarled with age that they have long ago been seen off the premises by the front entrance. In what old playwrights' home for fallen women, for instance, would one expect to hear again the doleful tale of a poor girl's unrequited love for the young master of the house where her mother worked as a maid? Or, for that mat- ter, the story of a plain schoolgirl who bought the headgirl a costly present, only to find that her impulsive appeal to her loved one to 'be my friend' was a rollicking joke to the rest of the school?

Heterosexual drama, even girls' school drama, has moved on a bit. To be expected to go through it all again with homosexuals, with roles suitably switched, is somewhat less than exhilarating. The Boys in the Band not only expects it but treats these con- fessional molehills to enough dripping, tear- stained close-ups to sug,gest.that it thinks it's climbing some arduous emotional North Face. The servant's son who loves the young master is black as well as homosexual; which might be unkindly described as bringing down two minorities with one barrel.

Mart Crowley's play, which he has himself adapted and produced for the screen, is a

mixture of these woebegone recitals, slow and plaintive as Victorian laments, with waspish, devious, allusive- and sometimes funny New York dialogue, played with fast assurance by members of the original stage cast. The pretext of the thing is the invasion by a 'straight' outsider of a birthday party given by self-pitying, sponging Michael (Kenneth Nelson) for self-pitying, spiteful, Jewish Harold (Leonard Frey). Rearing up at each other like assaulted cobras, they toy alternately with rebarbative jibes and with the faithful trappings of the apartment— books about Joan Crawford are read between rounds.

The very dim outsider (Peter White) scur- ries off to be sick; an excessive reaction. But the combination of schoolgirl confessional CI love him . . . I don't care who knows it') with a discernible element of holier-than- thou voyeurism does give off a certain sliminess. On the stage, we might have been less conscious of each actor in turn being manoeuvred into place for his big, broken- down moment. But William Friedkin's film, like his screen version of Pinter's The Birth- day Party, runs no risk of being faulted for excessive subtlety. One beeomes almost at- tached to the odious Harold, a weevilish Oscar Wilde quiveringly clinging to his overdressed dignity, while his birthday party dissolves into tears around him.

Robert Aldrich's Too Late the Hero returns the all-male film to sterner and more familiar ground : more sweating faces, inevitably, as we set off again to tramp through the jungle with one of those doomed, excessively quarrelsome lost patrols. One might have thought that one Dirty Dozen was enough for a film-making career; but Aldrich and his co-writer Lukas Heller are soldiering on to the distant bugle of the box-office. Once again, the mission (this time through the New Hebrides in World War Two to silence a Japanese radio station) is a kind of sadistic obstacle race, with interruptions for shooting wounded prisoners, chopping off fingers, and playing with land crabs; once again, the most reluc- tant soldiers duly turn up trumps. Michael Caine and Cliff Robertson survive longest, defending the anti-heroic principle with a last suicide run across open ground raked by machine-gun fire. Denholm Elliott, who gives the most thought-out performance, goes sooner: one knew after he shot those prisoners that in screen-writing terms he had doomed his survival chances. Aldrich's direc- tion reflects, as it should, considerable prac- tice. But in spite of Philippine locations the jungle remains an inconspicuous green set- ting for soldiers to carry on the fight against officers and each other until compelled to turn their attention to the enemy.

Grazie, Zia is a cool, black film from Italy about a millionaire's son who feigns paralysis as a form of social protest, is sent off in a wheelchair to stay with his doctor aunt (Lisa Gastoni), and enmeshes her in his private spider's web of dangerous games on the borders of sanity. The young director, Savatore Samperi, is still under heavy influence from compatriots such as Bertolucci and Bellocchio, and almost deliberate echoes of the latter's Fists in the Pocket are awakened by the casting of Lou Castel as the baleful rich boy. But the film has a perverse, secretive, independent wit, alienating but

elegant : subterranean cruelties and obsessions against a bland, white background; the sly sniper's gun trained on indolence in the summer garden.