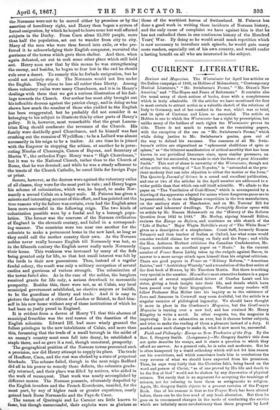 Reviews and Magazines. The Westminster for April has articles on the Italian campaign of 1866, on Hobbes of Malmesbury, "Contemporary Musical Literature," "Mr. Swinburne's Poems," "Mr. Dixon's New America," and "The Hopes and Fears of Reformers." It contains also the usual array of short notices of books, done with a completeness which is truly admirable. Of the articles we have mentioned the first is most certain to attract notice as a valuable sketch of the relations of Italy to Germany, and of her conduct in the war, which was so brief, and in spite of Custozza and Lissa so successfuL The article on Hobbes is one to which the Westminster has a right by prescription, but unlike many of the holders of such rights the Westminster proves its title. There is not much to remark on the remaining papers, with the exception of the one on "Mr. Swinburne's Poems," which while doing justice to Mr. Swinburne's genius, goes out of the way to defend his excesses. The censures of all Mr. S win- burne's critics are stigmatized as "ephemeral ebullitions of spite or spleen," as "the bitterest manifestation of critical acerbity that has been known in our periodical literature since, upon similar pretences, an attempt, but too successful, was made to stab the fame of poor Alexander Smith." This sort of abuse is unworthy of the Westminster, though not of the critic who, writing of "Les Noyades," is "astounded at the pru- rient modesty that can take objection to either the matter or the form." The Quarterly Journal of Science is a sound and excellent publication, and one or two of the articles in the April number are addressed to a wider public than that which can call itself scientific. We allude to the paper on "The Ventilation of Coal-Mines," which is accompanied by a drawing of the apparatus adapted for mines where dangerous gases are to be penetrated; to those on Belgian competition in the iron manufacture, on the sanitary state of Manchester, and on Mr. Torrens' Bill for artizans' and labourers' dwellings. The Fortnightly Review opens with an article by Mr. Nassau Molesworth on the "History of the Reform Question from 1832 to 1848." Mr. Morley, signing himself Editor, reviews the Essays on Reform, and continues an able sketch of the "Life of Burke." Major Whyte Melville's story of "The White Rose" gives us a description of a steeplechase. Count Saffl, formerly Roman Triumvir and then teacher of Italian at Oxford, has what some would consider twofold claims for writing on Italy and the Pope ; and while the Hon. Auberon Herbert criticizes the Canadian Confederation, Mr. Capes contributes an excellent paper on "Music." In the current number of Fraser Baron Liebig takes up the cudgels against Bacon, in answer to a more savage attack upon himself than his original criticism. There are good papers in Fraser on "Military Reform," "American Dairies," and "Archbishop Whately," and a translation of the first satire of the first book of Horace, by Mr. Theodore Martin. But there is nothing very special in the number. Macmillan's most attractive feature is a paper composed of several unpublished letters of Charles Lamb and his sister, giving a fresh insight into their life, and details which have been passed over by their biographers. Whether many readers will follow Professor Max Muller into his inquiry as to the existence of Jews and .Saracens in Cornwall may seem doubtful, but the article is a singular exercise of philological ingenuity. We should have thought it more in place in the Gentleman's Magazine, but the Gentltman's Magazine is turning over a new leaf, and has retained Mr. Henry Kingsley to write a novel. In other respects, too, the magazine is improving. It is as exhaustive as ever, but it chooses better subjects, and tries to make the reading of them a pleasure instead of a duty. It needed some such change to make it, what it now must be, successful. Faith and Riilosophy : Essays on Solis Tendencies of the Day. By the Rev. L Gregory Smith. (Longmans.)—Mr. Gregory Smith's title does not quite describe his essays, and it starts a question to which they afford no answer. As a general rule, he is calm and moderate. But he is often hampered by a timid orthodoxy which will not lot him reason out his convictions, and which sometimes leads him to conclusions the very reverse of what we should have expected from his premisses. Thus, he says very fairly that the Christian faith, being based on the word and person of Christ, "as of one proved by His life and death to be the Son of God" would not be shaken by any discoveries of physical science. Yet surely that is an argument for accepting the teachings of science, not for refusing to hear them as antagonistic to religion. Again, Mr. Gregory Smith objects to a present revision of the Prayer Book. One of his reasons is that as the Prayer Bock has been altered before, there can be the loss need of any fresh alteration. But then he goes on to recommend changes in the mode of conducting the service which are infinitely more revolutionary than those proposed by Lord