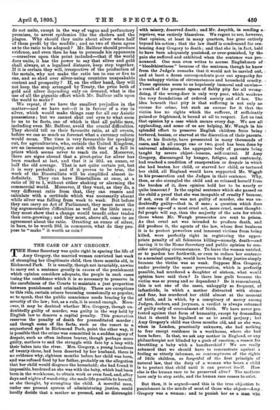 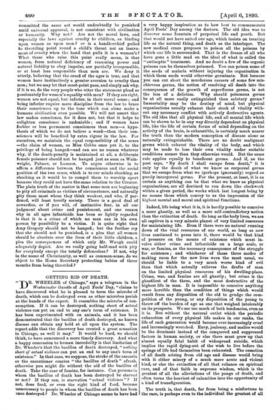 THE CASE OF AMY GREGORY.

THE Home Secretary was quite right in sparing the life of Amy Gregory, the married woman convicted last week of strangling her illegitimate child, then three months old, in Richmond Park. It is usually, though not invariably, unwise to carry out a sentence greatly in excess of the punishment which opinion considers adequate, the people in such cases losing the confidence which it is so necessary to preserve in the carefulness of the Courts to maintain a just proportion between punishment and criminality. There are exceptions to this rule, certain crimes becoming occasionally so popular, so to speak, that the public conscience needs bracing by the severity of the law; but, as a rule, it is sound enough. More- over, it may be doubted whether Mrs. Gregory, though un- doubtedly guilty of murder, was guilty in the way held by English law to deserve a capital penalty. This generation reserves the penalty of death for premeditated murder ; and though some of the facts, such as the resort to a sequestered spot in Richmond Park, point the other way, it is possible that the crime was committed in a sudden agony of despair, such as often induces braver, though perhaps more guilty, mothers to end the struggle with fate by a leap with their babes into the river. Mrs. Gregory, a young laundress of twenty-three, had been deserted by her husband, there is no evidence why, eighteen months before her child was born, and was refused food by her father, probably on the allegation that her child would disgrace the household; she had found it impossible, burdened as she was with the baby, which had been born in the workhouse, to obtain work or even food, and, after days and nights of wandering, she made life possible to herself, as she thought, by strangling the child. A merciful man, under our present system of administering justice, could hardly decide that a mother so pressed, and so distraught

with misery, deserved death ; and Mr. Asquith, in sending a reprieve, was entirely blameless. We regret to see, however, that opinion, at least in many quarters, has gone entirely beyond his action ; that the law itself is condemned for sen- tencing Amy Gregory to death ; and that she is, in fact, held to have been adequately punished, or over-punished, by the pain she suffered and exhibited when the sentence was pro- nounced. One man even writes to accuse Englishmen of "bloodthirstiness" because of the sentence, though he knew from the Judge's remarks that it would not be carried out, and at least a dozen correspondents pour out sympathy for the unhappy victim of circumstances and household cruelty. These opinions seem to us hopelessly immoral and unwiae- a result of the present spasm of flabby pity for all wrong- doing, if the wrong-doer is only very poor, which weakens the very foundations of ordered society and of law. The idea beneath that pity is that suffering is not only an excuse for crime, but such an excuse for it that the victim has no rights which the sufferer, if sufficiently pained or frightened, is bound at all to respect. Let us test that opinion by a case which occurs every day. We are all applauding, and some of us are helping, Mr. Waugh in his splendid effort to preserve English children from being i tortured, beaten, or starved at the discretion of their parents. He, or his Society, have prosecuted in many thousands of cases, and in all except one or two, good has been done by universal admission, the aggregate body of parents being taught by severe object - lessons, self-control. If Amy Gregory, discouraged by hunger, fatigue, and contumely, had reached a condition of exasperation or despair in which she had beaten her child, or starved her child, or tortured her child, all England would have supported Mr. WaRgh in his prosecution and the Judges in their sentence. Why, then, as she strangled the child and so released herself from the burden of it, does opinion hold her to be nearly or quite innocent P Is the capital sentence which she passed on the child a proof that she was incapable of cruelty P because, if not, even if she was not guilty of murder, she was un- doubtedly guilty—that is, if sane; a question which does not come up—of a most cruel act, more cruel, most thought- ful people will say, than the majority of the acts for which those whom Mr. Waugh prosecutes are sent to prison. As that cruel act was intended to produce death, and did produce it, the agents of the law, whose first business it is to protect powerless and innocent victims from being killed, were perfectly right in registering the appro- priate penalty of all felonious killing—namely, death—and leaving it to the Home Secretary and public opinion to con- sider mitigating circumstances. To leave the woman untried, or to pardon her forthwith, or even to reduce her sentence to a nominal quantity, would have been to deny justice simply because the victim was so weak. Suppose Mrs. Gregory, under precisely the same provocation, which is perfectly possible, had murdered a daughter of sixteen, what would opinion have said then P Is there less guilt because the victim was so young and so dependent P Be it remembered, this is not one of the cases, unhappily so frequent, of infanticide, in which a mother distracted with shame and fear, has murdered her child almost at the moment of birth, and in which, by a conspiracy of mercy among Judges, doctors, and jurymen, a verdict is always returned of guilty only of concealment of birth. We have never pro- tested against that form of humanity, except by demanding that it should be legalised so as to avoid perjury; but Amy Gregory's child was three months old, and as she was, when in London, practically unknown, she had nothing to fear except residence in a workhouse, where she had been before. Is that, we ask any mother in England, or any philanthropist not blinded by a gush of emotion, a reason for throttling a baby with a handkerchief ? We are really ashamed that we should have to remonstrate against a feeling so utterly inhuman, so contemptuous of the rights of little children, so forgetful of the first principle of natural law, that the duty of a woman who bears a child is to protect that child until it can protect itself. How else is the human race to be preserved alive? The mothers have only to step aside, and the human race ceases to exist.

Bat then, it is argued—and this is the true objection tc punishment in the minds of most of those who object—Amy Gregory was a woman; and to punish her as a ma a who

committed the same act would undoubtedly be punished amid universal approval, is not consistent with civilisation or humanity. Why not ? Are not the moral laws, and especially the laws against cruelty to children, as binding upon women as upon men P or is a handkerchief pulled to throttling point round a child's throat not an instru- ment of cruelty when the hand that pulls it is a woman's P What those who raise this point really mean, is that women, from natural deficiency of reasoning power and natural liability to obey impulse, are partially irresponsible, or at least less responsible than men are. We deny it utterly, believing that the creed of the ages is true, and that women have instinctively a greater aversion to cruelty than men; but we may let that moot-point pass, and simply ask why, if it is so, do the very people who utter the statement plead so passionately for women's equality with men P If they are right, women are not equal, but inferior, in their moral sense ; and being inferior require more discipline from the law to brace their consciences up to the tone which can alone make a humane civilisation even possible. We will not assert that law makes conscience, for it does not, but that it helps to enlighten conscience is undeniable ; and if women have feebler or less permanent consciences than men—a hypo- thesis of which we do not believe a word—then their con- sciences will be benefited by extra rigour in the law. For ourselves, we maintain the equal responsibility of the sexes —the claim of women, as Miss Cobbe once put it, to the privilege of being hanged—and can see no reason whatever why, if the death-penalty is maintained at all, a deliberate female poisoner should not be hanged just as soon as Wain- wright, Palmer, or Lamson. To argue otherwise is to affirm a difference between the consciences and the social position of the two sexes, which is to our minds shocking, as shocking as it would be to compel them to worship apart because they could not have the same relation to the Creator. The plain truth of the matter is that some men are beginning to pity all criminals as victims of circumstance, and naturally pity those most whom they think weakest, and who, if par- doned, will least terrify society. There is a good deal of cowardice, or if you will, of instinctive fear, in all our judgment about crime and punishment, and one reason why in all ages infanticide has been so lightly regarded is that it is a crime of which no man can in his own person by possibility be a victim. It is quite right that Amy Gregory should not be hanged ; but the further cry that she should not be punished, is a plea that all women should be absolute over the lives of their little children, a plea the consequences of which only Mr. Waugh could adequately depict. Are we really going half-mad with pity for everybody except the totally defenceless ? If not, why in the name of Christianity, as well as common-sense, do we object to the Home Secretary protecting babies of three months from being throttled ?