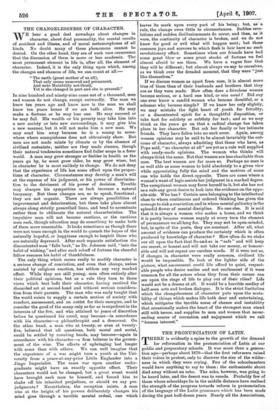 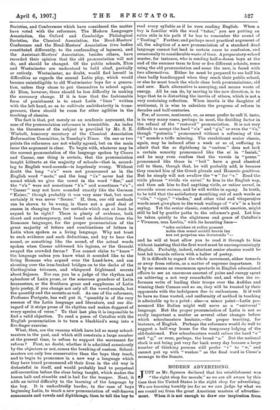 THE PRONUNCIATION OF LATIN.

For, of course, sentiment, or, as some prefer to call it, taste, is in very many cases, perhaps in most, the deciding factor in the refusal of the "restored" pronunciation. It is not very difficult to accept the hard " c's " and "g's," or even the " Vs," though " potentia " pronounced without a softening of the "t" sounds a trifle mincing. The recalcitrant senior classic, again, may be induced after a week or so of suffering to admit that the ae diphthong in " caelum" does not lack a certain sonority pronounced like the ai in "Isaiah," and he may even confess that the vowels in "poem" pronounced like those in " boil " have a good classical roll to them, though that, he will probably add, is because they remind him of the Greek plurals and Homeric genitives. But he simply will not swallow the " w" for "v." Read the virile phrase " vivida vie animi" to him in the English way, and then ask him to find anything virile, or rather wereel, in weewida weese animee, and he will writhe in agony. In truth, to be told that the satisfactory mouthing out of such words as " vilis," "vigor," " vindex," and other vital and vitupera4ive words must give place to the weak wailings of " w's " is a hard saying. Yet the senior classic, contorted with emotion, might still be led by gentler paths to the reformer's goal. Let him be taken quietly to the slightness and grace of Catellus'a " Vivamus, men Lesbia," with its haunting lines—

and he will at least allow you to read it through to him without insisting that the first word must be uncompromisingly English. Probably, indeed, reluctant senior classics would be beet led towards reform with a halter of poetry. It is difficult to regard the whole movement, either towards or away from reform, as a matter of supreme importance. It is by no means an uncommon spectacle in English educational affairs to see an enormous amount of pains and energy spent on achieving a not very remarkable end, and when the re- formers write of leading their troops over the Aufidus and winning their Cannae and so on, they will be treated by their opponents with the indulgence due to enthusiasm. It id well to have no time wasted, and uniformity of method in teaching is admirable up to a point: also—a minor point—Latin pro- nounced like Italian might well serve as a "universal" language. But the proper pronunciation of Latin is not so really important a matter as several other changes before which schoolmasters hesitate,—the proper teaching, for instance, of English. Perhaps the reformers would do well to suggest a half-way house for the temporary lodging of the old-fashioned. Few schoolmasters would refuse the hard " c " and "g," or even, perhaps, the broad "a." But the national clock is not being put very far back every day because a large number of thinking persons still prefer " v " to " w," and cannot put up with " weekee " as the final word in Ctesar's message to the Senate.