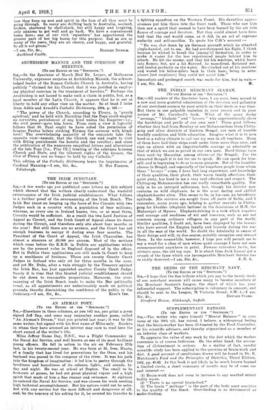 [To THE EDITOR OF THE " SPECTATOR."3 Sin,—Elsewhere in these columns, as you tell me, you print a poem signed Jeff Day, and some may remember another poem, called "An Airman's Dream," that you printed last year; it was by the same writer, but signed with his first name of Miles only. Readers in whom they have aroused an interest may care to read here the short record of the writer's life.

Miles Jeffrey Game Day, D.S.C., was a Flight Commander in the Naval Air Service, and well known as one of its most brilliant young officers. He fell in action in the air on February 27th last, in. his twenty-seoond year. He was born at St. has, Hunts, of a family that has lived for generations by the Ouse, and his boyhood was passed in the company of the river. It was his path into the kingdom of imagination : it led him to poetry through the loveliness and homeliness of its colours, lights, and sounds, by day and night. He was at school at Repton. Too small to be first-rate at games, he had yet great physical vigour and a high spirit that made of him a fine runner and swimmer. At eighteen he entered the Naval Air Service, and was chosen for work needing high technical accomplishment. But his nature could not be satis- fied with any service but the most difficult and dangerous of all, .aud, by the urgency of his asking for it, he secured his transfer to a fighting squadron on the Western Front. His dauntless aggres- siveness put him there into the front rank. Those who saw him then saw a spirit that seemed to have been fanned by the air into flames of courage and devotion. But they could almost have fore- told that the end would come, as it did, in an act of supreme audacity and self-sacrifice. To quote his C.O.'s account :— " He was shot down by six German aircraft which he attacked single-handed, out to sea. He had out-distanced his flight, I think because he wished to break the [enemy's] formation, in order to make it easier for the less experienced people behind him to attack. He hit the enemy, and they hit his machine, which burst into flames; but, not a bit flurried, he nose-dived, flattened out, and landed perfectly on the water. He climbed out of his machine and waved his fellow-pilots back to their base; being in aero- planes [not seaplanes] they could not assist him."

Immediate and prolonged search was made for him, but in vain.—