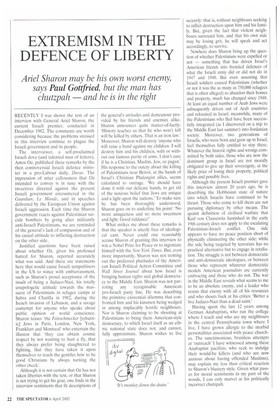 EXTREMISM IN THE DEFENCE OF LIBERTY

Ariel Sharon may be his own worst enemy,

says Paul Gottfried, but the man has

chutzpah — and he is in the right

RECENTLY I was shown the text of an interview with General Ariel Sharon, the current Israeli premier, conducted in December 1982. The comments are worth considering because the problems stressed in this interview continue to plague the Israeli government and its people.

The interviewer, a self-proclaimed Israeli dove (and talented man of letters), Amos Oz, published these remarks by the then controversial Israeli defence minister in a pro-Labour daily, Davar. The impression of utter callousness that Oz intended to convey is in tune with the invectives directed against the present Israeli government encountered in the Guardian, Le Monde, and in speeches delivered by the European Union against Israeli aggression. Each time the Sharon government reacts against Palestinian suicide bombers by going after militantly anti-Israeli Palestinians, we are reminded of the general's lack of compassion and of his casual attitude to inflicting destruction on the other side.

Justified questions have been raised about whether Oz, given his professed hatred for Sharon, reported accurately what was said. And there are statements here that would cause Israeli sympathisers in the US to wince with embarrassment, such as Sharon's proud acceptance of the insult of being a Judaeo-Nazi, his totally unapologetic attitude towards the massacre of Palestinians in refugee camps at Sabra and Chatilla in 1982. during the Israeli invasion of Lebanon, and a savage contempt for anyone who speaks about public opinion or world conscience. Sharon teases 'the Feinschmecker [sybaritic] Jews in Paris, London, New York, Frankfurt and Montreal' who entertain the illusion that 'they can obtain cosmic respect by not wanting to hurt a fly, that they always prefer being slaughtered to fighting, that they have taken it upon themselves to teach the gentiles how to be good Christians by always turning the other cheek'.

Although it is not certain that Oz has not taken liberties with the text, or that Sharon is not trying to get his goat, one finds in the interview sentiments that fit descriptions of

the general's attitudes and demeanour provided by his friends and enemies alike. Sharon announces quite matter-of-factly: 'History teaches us that he who won't kill will be killed by others. That is an iron law.' Moreover, Sharon will destroy 'anyone who will raise a hand against my children. I will destroy him and his children, with or without our famous purity of arms. I don't care if he is a Christian, Muslim. Jew, or pagan.' His response to the outcry about the killing of Palestinians near Beirut, at the hands of Israel's Christian Phalangist allies, seems calculated to outrage. 'We should have done it with our delicate hands, to get rid of the noxious belief that Jews are unique and a light upon the nations.' To make sure he has been thoroughly understood, Sharon goes on to underline his point: 'No more uniqueness and no more sweetness and light. Good riddance!'

What strikes me about these remarks is that the speaker is utterly free of ideological cant. Never could one reasonably accuse Sharon of granting this interview to win a Nobel Prize for Peace or to ingratiate himself with the New York Times. But, even more importantly. Sharon was not trotting out the preferred platitudes of the American Israeli Political Action Committee and Wall Street Journal about how Israel is bringing human rights and global democracy to the Middle East. Sharon was not parroting any recognisable American pro-Israeli party line. He was describing the primitive existential dilemma that confronted him and his kinsmen being wedged in among implacably hostile neighbours. Nor is Sharon claiming to be shooting at Palestinians to bring them American-style democracy, to which Israel itself as an ethnic national state does not, and cannot, fully approximate. Sharon wishes to live securely: that is, without neighbours seeking to inflict destruction upon him and his family. But, given the fact that violent neighbours surround him, and that his own side may be losing grit, he will speak and act accordingly, to survive.

Nowhere does Sharon bring up the question of whether Palestinians were expelled or not — something that has driven Israel's American friends into frenzied defences of what the Israeli army did or did not do in 1947 and 1948. But even assuming that Israeli soldiers caused Palestinians (whether or not it was the as many as 750.000 refugees that is often alleged) to abandon their homes and property, much has changed since 1948. At least an equal number of Arab Jews were subsequently driven out of Arab countries and relocated in Israel; meanwhile, many of the Palestinians who fled have been successfully integrated (as I discovered on a trip to the Middle East last summer) into Jordanian society. Moreover, two generations of Israelis, who were born and grew up in Israel, feel themselves fully entitled to stay there. Whatever the historic rights and wrongs committed by both sides, those who are now the dominant group in Israel are not morally obligated to give up their sovereignty, at the likely price of losing their property, political rights and possibly lives.

Although the present Israeli premier gave this interview almost 20 years ago, he is describing the Hobbesian state of nature into which Israelis have continued to be thrust. Those who come to kill them are not pursuing diplomacy by other means. The quaint definition of civilised warfare that Karl von Clausewitz furnished in the early 19th century does not apply to the escalating Palestinian–Israeli conflict. One side appears to have no peace position short of physically eliminating the other side; while the side being targeted by terrorists has no practical alternative but to engage in retaliation. The struggle is not between democratic and anti-democratic ideologues, or between those who represent whatever democratic models American journalists are currently embracing and those who do not. The war in the Middle East reveals what seems to me to be an absolute enemy, and a leader who resists that enemy with all of his resources and who shouts back at his critics: 'Better a live Judaeo-Nazi than a dead saint.'

Having spent the last 12 years among German Anabaptists, who run the college where I teach and who are my neighbours in the central Pennsylvania town where I live. I have grown allergic to the morbid personalities associated with peace churches. The sanctimonious, brainless attempts at 'outreach' I have witnessed among these Anabaptist pacifists, who seek to indulge their would-be killers (and who are now anxious about having offended Muslims), may explain my less than critical reaction to Sharon's blustery style. Given what passes for moral sentiments in my part of the woods, I can only marvel at his politically incorrect chutzpah.