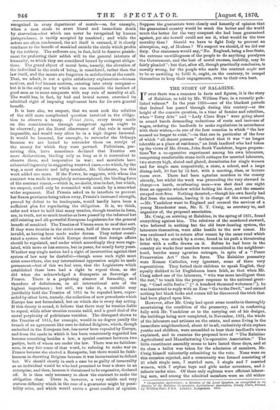 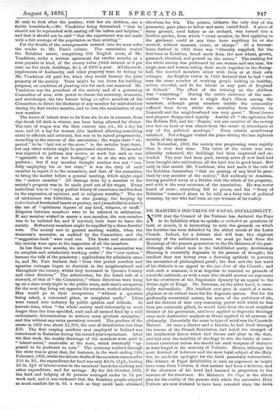 IF ever there was a romance in facts and figures, it is the story of Ralahine, as told by Mr. William Pare, in a recently pub- lished volume.* In the year 1830—one of the blackest periods that Ireland has passed through during this century—at the height of the conacre question, in a time of famine and rebellion, when "Terry Alts" and "Lady Clare Boys" were going about in armed bands demanding reductions of rents and increase of wages, ordering the landlords to make regulations in accordance with their wishes,—in one of the four counties in which "the law seemed no longer to exist,"—in that one in particular of the four of which "all decent persons" declared that it was "no longer tolerable as a place of residence," an Irish landlord who had taken up the views of Mr. Owen, John Scott Vandeleur, began prepare- tionefor a co-operative experiment among his own labourers, comprising comfortable stone-built cottages for married labourers, two storeys high, slated and glazed, dormitories for single women and for single men respectively, a store, a school, and a large dining-hall, 30 feet by 15 feet, with a meeting, class, or lecture room over. There had been agrarian murders in the county already, but whilst the work was proceeding the very steward in charge—a harsh, overbearing man—was shot dead one night from an opposite window whilst bolting his door, and the assassin escaped scot-free. Nothing daunted,—though his own family had fled from the mansion, leaving it in charge of the armed police, —Mr. Vandeleur went to England and secured the services of a young Manchester man, Mr. E. T. Craig, as secretary to, and organizer of, the proposed association.

Mr. Craig, on arriving at Ralahine, in the spring of 1831, found everything against him. The relatives of the murdered steward, who believed in nothing but the old brow-beating system, the labourers themselves, were alike hostile to the new corner. He was cautioned not to return after sunset by the same road which he left by, was struck by a stone, found in his path a threatening letter with a coffin drawn on it. Before he had been in the country six weeks four murders were committed in the neighbour- hood, besides many agrarian outrages, in spite of a "Peace Preservation Act" then in force. The Ralahine peasantry were Roman Catholics, very ignorant, some of them very superstitious. They forbad their children to speak English, they equally disliked to let Englishmen learn Irish, so that when Mr. Craig asked one of the labourers, "who was more intelligent than the rest," to teach him the proper response to the national greet- ing, " Cead mine fealte !" ("A hundred thousand welcomes !"), he was instructed to reply with an Erse "Go to the Devil," and earned nothing but black looks and curses till he discovered the trick that had been played upon him.

However, after Mr. Craig had spent some months in thoroughly ascertaining the condition of the peasantry, and in conferring fully with Mr. Vandeleur as to the carrying out of his designs, the buildings being now completed, in November, 1831, the whole of the labourers and artizans on the estate, and some living in the immediate neighbourhood, about 40 in all, exclusively of six orphan youths and children, were assembled to hear their landlord's views explained, and to examine the proposed laws of "The Ralahine Agricultural and Manufacturing Co-operative Association." The little constituent assembly seems to have lasted three days, and at its close a ballot was taken for the admission of members, Mr. Craig himself voluntarily submitting to the vote. None were on this occasion rejected, and a community was formed consisting of 21 adult single men, 7 married men, 5 single and 7 married women, with 7 orphan boys and girls under seventeen, and 5 infants under nine. Of these only eighteen were efficient labour- ing men, and among the admitted members were an old widow

fit only to look after the poultry, with her six children, one a feeble hunchback,—Mr. Vandeleur being determined "that he should not be reproached with casting off the infirm and helpless," and that it should not be said "that the experiment was not made with a fair average of the population as then existing."

For the details of the arrangements entered into we must refer the reader to Mr. Pare's volume. The association rented the Ralahine estate, comprizing 618 English acres, of Mr. Vandeleur, under a written agreement for twelve months, at a went payable in kind, of the money value (with interest at 6 per -cent. on live stock, buildings, &c.), of 1.900 a year. All the stock, implements of husbandry, and other property were to belong to Mr. Vandeleur till paid for, when they would become the joint property of the society. Trees might be cut down for building purposes, on condition of planting two for each one removed. Mr. Yandeleur was the president of the society and of a governing -Committee of nine, with power to choose the secretary, treasurer, -and storekeeper, the two former being ex-officio members of the -Committee, to direct the discharge of any member for misbehaviour -daring the first twelve months, and to veto the nomination of any mew member.

The hours of labour were to be from six to six in summer, from -day-break till dark in winter, one hour being allowed for dinner. The rate of wages was the then current one, viz., 8d. a day for mien, and 5d. a day for women (the landlord allowing something .extra to officials and artisans), but was to be raised progressively, -according to the success of the association ; the wages were " ex- pected " to be " laid out at the store" in the articles kept there, but any other articles might be purchased elsewhere. No member was expected to perform any service or work but such as was -" agreeable to his or her feelings," or he or she was able to perform ; but if any member thought another was not "use- fully employing his or her time," it was the duty of such -member to report it to the committee, and that of the committee -to bring the matter before a general meeting, which might expel the "useless member." All damage done by a member to the -society's property was to be made good out of his wages. Every individual was to "enjoy perfect liberty of conscience and freedom in the expression of opinions and in religious worship." The use of nicknames was forbidden, as also gaming, the keeping by .individualsof fourfooted beasts or poultry, and (wonderful to relate!) the use of "spirituous liquors of any kind, tobacco, or snuff." .Disputes between members were to be referred to arbitration. If any member wished to marry a non-member, the non-member was to be balloted for, and if rejected, both were to leave the -society. Refractory members might be expelled by a three-fourths' vote. The society met in general meeting weekly, when the treasurer's accounts, as audited by the Committee, and the -" suggestion-book" were read out. The books and accounts of the society were open to the inspection of all the members.

In leas than two months, we are assured, " the association was in complete and satisfactory working order ;" the "new system" became the talk of the peasantry ; applications for admission came in, and Mr. Pare declares that "from this period murders and -agrarian outrages began to diminish in the neighbourhood and throughout the county, whilst they increased in Queen's County and other districts." The substitution, for the hated rule of a steward, of that of "the Committee," whose directions were hung mp on a slate every night in the public room, each man's occupation for the next day being set opposite his number, worked admirably. Men would go to their occupations "without a question being asked, a command given, or complaint made." Idlers were tamed into industry by public opinion and ridicule. At -harvest-time, when "the whole society used voluntarily to work longer than the time specified, each and all seemed fired by a wild -enthusiastic determination to achieve some glorious enterprise," .and this without any extra pecuniary reward. The produce of the estate in 1832 was about £1,700, the cost of distribution less than -150. The first reaping machine ever employed in Ireland was introduced in Ralahine during the second year's operations. After the first week, the weekly drawings of the members were paid in -" labour-notes," receivable at the store, which eventually "ap- peared to be preferred to coin." The economy realized through the store was so great that, for instance, in the week ending 14th February, 1832, whilst the labour-drafts of the members amounted to In 4s. 2d., the expenditure for food was only £4 Os. 110., leaving 16 3e. 20. of labour-notes in the members' hands for clothing and other expenditure, and for savings. By the 6th October, 1833, the food and lodging of 81 persons averaged under is. 7d. per week each, and it was reckoned that the Ralahine people enjoyed as much comfort for 6s. 6d. a week as they could have obtained elsewhere for 60s. The potato, hitherto the only stay of the peasantry, gave place to better and more varied food. A piece of stony ground, used before as an orchard, was turned into a kitchen-garden, from which "every member, by first applying to the gardener, could at any time have anything he or she wanted, without measure, count, or charge." At a harvest- home festival in 1833 there was "liberally supplied, for the first time in Ralahine, bread made from the new wheat, grown, garnered, threshed, and ground on the estate." The cooking for the whole society was performed by one woman and one man, the single men and women taking their meals together in the dining- hall, the married members either with them or at their ovin. cottages. An English visitor in 1833 declared that he had "not seen the same number of working people looking so healthy, active, cheerful, and fit for labour in any part of England or Ireland." The effect of the training on the children was "surprising." During the entire existence of the asso- ciation "there was not a single day's illness among the members, although great numbers outside the community suffered from fever, whilst the mortality from cholera in Limerick and the neighbourhood was very great." Moral fevers and plagues disappeared equally. Amidst all "the agitation for the Reform Bill, and for Repale,' not one member of the society ever lost an hour or was absent from the estate in attendance at any of the political meetings." Even outside mendicancy vanished. Not a beggar visited the place during the last eighteen months of the system.

In November, 1833, the society was progressing more rapidly than it ever had done. The value of the estate was con- siderably enhanced, the buildings had been improved and ex- tended. The rent had been paid, twenty acres of new land had been brought into cultivation, all the land was in good heart. But early in that month Mr. Vandeleur, who had made it the rule of the Ralahine Association "that no gaming of any kind be prac- tised by any member of the society," fled suddenly to America, having gambled away at a Dublin club the whole of his property, and with it the very existence of the association. He was never heard of more ; everything fell to pieces, and the "Story of Ralahine" remained alone to be told, as a fairy tale of political economy, by one who had been an eye-witness of its reality.