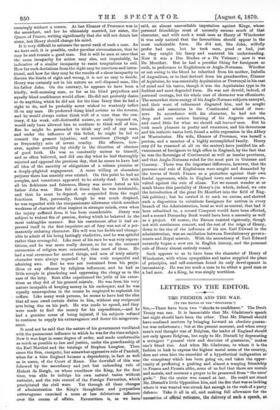 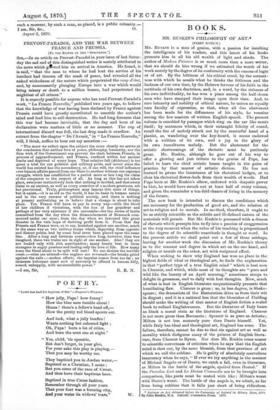 TILE PREMIER AND THE WAR.

170 THE EDITOR OF THE " SPEOTAT011.1 SIR,—There have been two "shocks to confidence." The Draft Treaty was one. It is lamentable that Mr. Gladstone's speech last night should have been the other. That Mr. Disraeli should have confused matters by bringing forward an obsolete guaran- tee was unfortunate ; but at the present moment, and when every man's real thought was of Belgium, the leader of England should not only ignore Belgium, but reply to Mr. Disraeli by deprecating a stringent "general view and doctrine of guarantee," makes one's blood rise. And when Mr. Gladstone, to whom it is the fashion to look to express the highest moral sense of the country, does not even hint the smoulder of a hypothetical indignation at the conspiracy which has been going on, and takes the oppor- tunity of proffering a gushing and almost a weeping friendship to France and Prussia alike, some of us feel that there are morals and morals, and murmur a prayer to be preserved from "the unco' gude." But the orator was roused at last. He could not stand Mr. Disraeli's little Opposition hits, and the fire that was so lacking where it was wanted was struck fast enough in the rush of a party defence. Take it all in all, and making full allowance for the necessities of official reticence, the delivery of anc,h a speech, at

such a moment, by such a man, so placed, is a public calamity.—