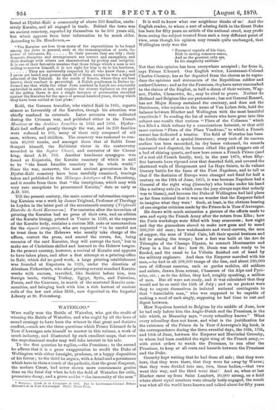 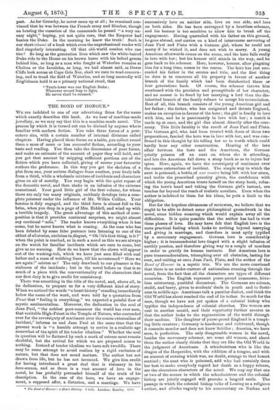 WATERLOO.* Wuo really won the Battle of Waterloo, who got

the credit of winning the Battle of Waterloo, and who ought by all the laws of -sound strategy to have been the winner in that great and decisive -conflict,—such are the three questions which Prince Edouard de in Tour d'Auvergne sets himself to answer in this volume, a work of much industry, and illustrated by such excellent maps, that even the unprofessional reader may well take interest in his tale.

To the first question he replies,—the Prussians ; to the second lie affirms that it is a gross exaggeration to credit the Duke of Wellington with either foresight, prudence, or a happy disposition of his forces ; to the third he argues, with a detail and a persistence which have in them a touch of the pathetic, that the great Emperor, the modern Catsar, had never shown more consummate genius than on the fatal day when he left the field of Waterloo for exile, premature decay, and a grave amidst "the immensity of the seas."

It is well to know what our neighbour thinks of us! And the English reader, to whom a sort of adoring faith in the Great Duke has been for fifty years an article of the national creed, may profit from seeing the subject treated from such a very different point of view, even though his opinion may remain quite unchanged, that Wellington truly was the

"Foremost captain of his time, Rich in saving common-sense, And as the greatest only are, In his simplicity sublime."

Not that this opinion has been everywhere accepted ; far from it, says Prince Edouard. One English writer, Lieutenant-Colonel Charles Chesney, has so far departed from the chorus as to repro- duce the opinions and statements of the Republican soldier and author Charras ; and as for the Prussians, theyhave never succumbed to the claims of the English, as half-a-dozen of their writers, Wag- ner, Plotho, Clausewitz, &c., may be cited to prove. Neither do Holland and Belgium like our pretensions ; has not General Renard, has not Major Knoop sustained the contrary, and does not the Dutchman, who rejoices in the name of Van Loben Sbls, hold the balance between Blucher and Wellington with the most beautiful exactitude ? In reading the list of writers who have gone into this subject one recalls that curious "Flora of the Coliseum" which has filled a thick volume by a conscientious botanist, or that still more curious "Flora of the Place Vendome," to which a French savant has dedicated a treatise. The field of Waterloo has been the fertile theme of a special literature ; every inch of its uneven surface has been ransacked, its dry bones exhumed, its records canvassed and disputed, its heroes sifted like gold nuggets out of a bed of shining quartz, and now here comes a French Prince (and of a real old French family, too), in the year 1870, when fifty- five harvests have ripened over that deserted field, and covered the shattered walls of Hougomont and La Haye Sainte, to do valiant literary battle for the fame of the First Napoleon, and to tell us that if the destinies of Europe were changed and fixed for half a century on the 18th of June, 1815, it was because Napoleon had a General of the right wing (Grouchy) who broke under his hand like a railway axle (in which case the jury always says that nobody was to blame), and because the Duke of Wellington had laid plans so far from rational that it was no wonder that the Emperor failed to imagine what they were ! Such, at least, is the obvious bearing of one singular criticism made by the Prince de in Tour d'Auvergne.

He draws with much animation a picture of the efforts made to arm and equip the French Army after the return from Elba ; how the Paris workshops were filled with busy armourers ; how night and day the gunmakers slaved to make new guns and to mend 300,000 old ones ; how watchmakers and wood-carvers, the men of copper, the sons of Tubal Cain, left their special business and fell to arming the troops ; how a fort was built at the Arc de Triomphe of the Champs Elysees, to connect Montmartre and Passy in a line of fire ; how St. Denis was made ready to be flooded, and the canal to La Villette finished out of hand by the military engineers. And then the Emperor marched with his men,—he bad in all 288,000 troops of the line, and about 220,000 men of different reserves, such as gardes mobiles, old soldiers and sailors, drawn from retreat, Chasseurs of the Alps and Pyre- nees, etc. ; as to the Allies, they had, roughly speaking, a million of men. But all were not ready, and it was calculated that they would not be so until the 15th of July ; and on no pretext were they to expose themselves in isolated national contingents to that "formidable man," who was supposed to be capable of making a meal of each singly, supposing he had time to rest and digest between.

How Napoleon hurried to Belgium by the middle of June, how he had only before him the Anglo-Dutch and the Prussians, is the tale which, as Macaulay says, "every schoolboy knows." What every schoolboy does not know, and what is the justification for the existence of the Prince de la Tour d'Auvergne's big book, is the correspondence during the three eventful days, the 16th, 17th,

and 18th of June, between the Emperor and Mareschal Grouchy, to whom had been confided the right wing of the French army,—

past. As for Grouchy, he never came up at all ; he remained con- vinced that he was between the French army and Blucher, though on hearing the cessation of the cannonade he passed "a very un- easy night," hoping, yet not quite sure, that the Emperor had beaten the Duke. In the morning he knew the truth ! Such is -our short résumé of a book which even the unprofessional reader will find singularly interesting. Of that old-world combat who can tire? So long as the generation lives which saw the white-haired Duke ride to the House on his brown horse with his belted groom behind him, so long as a man who fought at Waterloo remains at Chelsea or the Invalides, so long, we had almost said, as Dover -Cliffs look across at Cape Gris Nez, shall we care to read concern- ing, and to tread the field of Waterloo, and so long assuredly will Englishmen hold it as a primary national creed, that

"Truth-lover was our English Duke ; Whatever record leap to light, He never shall be shamed."