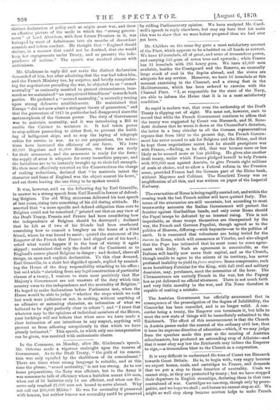 Page 2, 6 August 1870 — The Austrian Government has officially announced that in consequence of
Close

The Austrian Government has officially announced that in consequence of

the promulgation of the dogma of Infallibility, the Concordat has been cancelled, and is no longer valid. A con- cordat being a treaty, the Emperor can terminate it, but bills to meet the new state of things will be immediately submitted to the Reichsratb. The effect of this announcement is that the Church in Austria passes under the control of the ordinary civil law, that it loses its supreme direction of education—which, if we may judge from the speeches made this year at the meeting of Austrian schoolmasters, has produced an astounding crop of Atheists—and that it must obey any law the Reichsrath may induce the Emperor to sign,—a tremendous blow to the Church as a corporation.