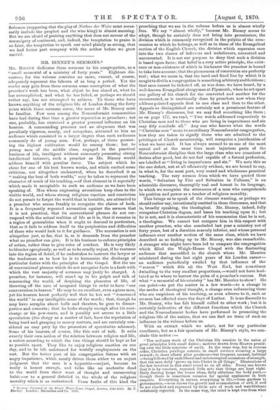 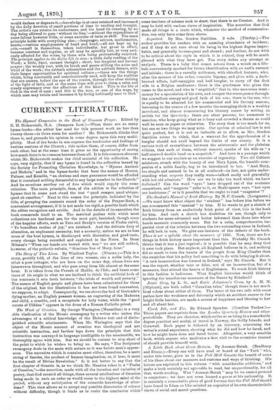 Mn. BINNEY dedicates these sermons to his congregation, as a "small memorial of a ministry of forty years." Eighteen dis- courses, for the volume contains no more, cannot, of course, adequately represent the labours of so long a period. Yet the reader may gain from these sermons some conception of what the preacher's work has been, what object he has aimed at, what he has accomplished, and what he has failed, or perhaps we should rather say, has not attempted to achieve. To those who have known anything of the religious life of London during the forty years which these sermons cover, the name of Mr. Binney must be familiar. Few men among the Nonconformist communities have had during that time a greater reputation as preachers ; not one, probably, has exercised a greater personal influence on his hearers. A commanding presence and an eloquence that was peculiarly vigorous, manly, and outspoken, attracted to him an audience which consisted in a larger degree than such audiences commonly do of young men. Few, perhaps, of those possess- ing the highest cultivation would be among them ; but to young men of the middle class, engaged in the practical business of life, intelligent without commonly possessing strong intellectual interests, such a preacher as Mr. Binney would address himself with peculiar force. The subject which he chose for one of his best known works, and which excited some criticism, not altogether undeserved, when he described it as "making the best of both worlds," may be taken to represent the character of much of his teaching,—of that element in it especially which made it acceptable to such an audience as we have been speaking of. Men whom engrossing avocations keep close to the visible world, and whom strong religious emotion and conviction do not permit to forget the world that is invisible, are attracted to a preacher who seems frankly to recognize the claims of both. It is a frequently repeated accusation against the sermon that it is not practical, that its conventional phrases do not cor- respond with the actual realities of life as it is, that it remains in a region of generalities when it ought to descend to particulars, that so it fails to address itself to the perplexities and difficulties of those who would look to it for guidance. The accusation is not altogether just, so far, that is, as it demands from the preacher what no preacher can give. It is his business to enforce principles of action, rather than to give rules of conduct. He is very likely to blunder egregiously, as well as to be cruelly unjust, if he ventures into the region of detail, if he undertakes to instruct the lawyer or the tradesman as to how he is to harmonize the discharge of particular duties with the principles of the Gospel. But the use of conventional phrases which do not recognize facts is a fault with which the vast majority of sermons may justly be charged. A preacher, for instance, will stand up in his pulpit and talk of renouncing the world, of despising the pleasures of life, of throwing off the care of temporal things in order to have "our conversation in heaven." He may be an excellent, even a pious man, yet his hearers know perfectly well that he has not "renounced the world" in any intelligible sense of the words ; that, though he may have scruples about balls and theatres, he goes to dinner- parties and concerts ; that he looks sharply enough after his rent- charge or his pew-rents, and is possibly not averse to a little speculation (the clergy as a matter of fact, have the reputation of being hard and grasping in money matters, and are certainly con- sidered an easy prey by the promoters of speculative schemes). Some of his hearers, of course, like this sort of talk. It suits exactly their own notion of the relation between religion and life, a notion according to which the two things should be kept as far as possible apart. They like to enjoy religious emotion on one day, and to be left unfettered for worldly employments on the rest. But the better part of his congregation listens with an angry impatience, which, mostly drives them either to an unjust judgment that the man is a hypocrite—unjust, because he really is honest enough, and talks like an anchorite dead to the world from sheer want of thought and unreasoning habit—or to a general disbelief in the whole of the religious morality which is so caricatured. From faults of this kind the * Sermons Preached in the King's Weigh-house Chapel, London, 1829-1869. By T. Bin ney. London : Macmillan and Co. 1869.

preaching that we see in the volume before us is almost wholly free. We say "almost wholly," because Mr. Binney seems to adopt, though he certainly does not bring into prominence, the division which is commonly recognized in the pulpits of the com- munion to which he belongs, as well as in those of the Evangelical section of the English Church, the division which separates men into the two classes of believers and unbelievers, converted and unconverted. It is not our purpose to deny that such a division is based upon facts ; that belief is a very active principle, the exist- ence or non-existence of which in his hearer the preacher is bound to take into account; that the phenomena of conversion are perfectly real ; what we mean is, that the hard and fixed line by which it is sought to divide a congregation is something arbitrary and fictitious ; that men cannot be ticketed off, as was done, we have heard, by a well-known Evangelical clergyman at Plymouth, when he set apart one gallery of his church for the converted and another for the unconverted, as is continually done by preachers now when they address pointed appeals first to one class and then to the other. Appeals so distinguished are certainly not a prominent feature of Mr. Binney's discourses, but we may find something like them ; so on page 177, we read, "Two words addressed respectively to Christian men and to those who are living in impenitence and sin may fitly conclude all." Any one who knows what the words "Christian men" mean to an ordinary Nonconformist congregation, how they are taken to signify those who are admitted to the privileges of Church membership, will recognize a justification of what we have said. It has always seemed to us one of the most unreal and at the same time most injurious parts of the Nonconformist discipline that the large class who are conscious of desires after good, but do not feel capable of a formal profession, are labelled as "living in impenitence and sin." We note this as the one defect, not at all offensively evident, we are bound to say, in what is, for the most part, very sound and wholesome practical

teaching. The very sermon from which we have quoted these words, "Salvation by Fire and Salvation in Fullness," is an

admirable discourse, thoroughly real and honest in its language, in which we recognize the utterances of a man who comprehends his position and power as a teacher of religious morality.

This brings us to speak of the element wanting, or perhaps we should rather say, intentionally omitted in these discourses, and that is, broadly speaking, the theological. Mr. Binney, indeed, fully recognizes Christian dogma, and bases his teaching upon it ; but he is not, and it is characteristic of his communion that he is not, a theologian. We cannot but compare him in this respect with another preacher, who also concluded last year a ministry not of forty years, but of a duration scarcely inferior, and whose personal influence over another section of the same class, which we have described as so looking up to Mr. Binney, was also remarkable.

audience that assembled in the church where Mr. Maurice ministered during the last eight years of his London career—

an audience periodically swelled by that influence of the " season " which fills all the 1Vest End, but sometimes dwindling to the very smallest proportions,—would not have hesi- tated as to where to bestow the palm of a preacher's success. But what "a memorial of his ministry" has Mr. Maurice to show ! He can point—to put the matter in a few words—to a change in the modes of theological thought, a change even influencing those who are suspicious of his teaching, or even adverse to it, such as no man has effected since the days of Luther. It is no discredit to, Mr. Binney, who has felt himself called to other work ; but it is certainly indicative of the different functions which the Church and the Nonconformist bodies have performed in promoting the religious life of the nation, that we can find no trace of such an influence in the volume before us.

With an extract which we select, not for any particular excellence, but as a fair specimen of Mr. Binney's style, we con- clude this notice :—

"The ordinary work of the Christian life consists in the union of great principles with small duties ; motives drawn from Heaven presid- ing over the little concerns of earth. In the same way, but in reverse order, Christian privilege consists in small services securing a large reward ; in short efforts after goodness—but frequent, earnest, habitual —being followed by such liberal and uninterrupted accessions of strength, that the man daily 'grows up into Christ in all things.' Illustrations of the law involved in this stand round us on all sides. Every one knows that it is by constant, repeated little acts that things are kept right. Daily dusting keeps the house clean, daily ablutions the body pure,— though there is sometimes occasion for special appliances in both respects. Everything in nature, everything in life,—from gardens to governments,—soon shows the growth and accumulation of evil, if evil be not checked and repressed by little acts of work and watchfulness sedulously repeated. In the same way, the mind is kept free from what

would darken or deprave it,—knowledge is at once retained and increased by the daily devotion of small portions of time to reading and thought. The artist's eye retains its correctness, and his hand its cunning, by no day being allowed to pass 'without its line,'—without the expenditure of some labour however little, or some exercise of taste or skill. The same principle holds with everything else ;—languages, science, mathematics, musio,—various employments of hand and head,—all are kept up by acts,—small in themselves, taken individually, but great in effect, because constant and regular, as all may be speedily lost, or very seri- ously affected for the worse, by these acts being protractedly remitted. The principle applies to the divine life in man : a little daily reading of the Word; a little, fixed, earnest thought ; short, but frequent and fervent prayer ; the weekly rest, with its break and pause stilling the noise and whirl of the week ; the sabbath solemnities and the sabbath leisure, with their larger opportunities for spiritual culture ;—these are the things which, being constantly and conscientiously used, will keep the realities that are unseen, before the eye of the reason, through the clear shining of the light of faith, and at the same time will give to them a calm and steady supremacy over the affections of the heart. This is the life of God in the soul of man ; and this is the way, or one of the ways, by which men may retain and increase it by living habitually near to God."