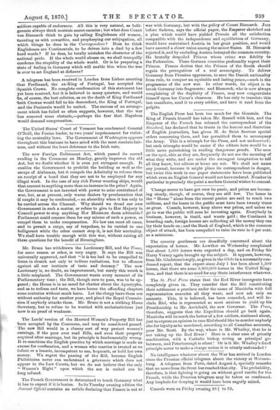 The English Press has been too much for the Generals.

The King of Prussia himself has taken Mr. Russell with him, and the Emperor of the French has released the correspondent of the Standard, has declared that lie trusts in the honour and discretion of English journalists, has given M. de Saint Sauveur special orders concerning them, and has permitted them to accompany the Army. This is a triumph for the Press, and not undeserved ; but such triumphs would be easier if the editors here would be a little more painstaking in reading dangerous proofs. The men on the spot, able as they are, frequently do not see the meaning of what they write, and are under the strongest temptation to tell all they know, but editors at home are not. We shall not name any journal, because it might place its correspondent in danger, but twice this week in one paper statements have been published which even an English General would not have endured. Number in particular is precisely the point a modern General wishes to conceal.