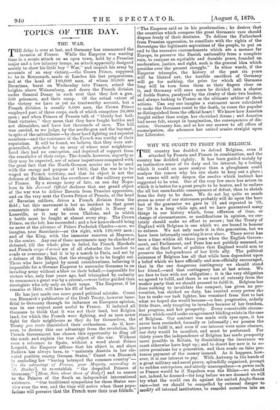 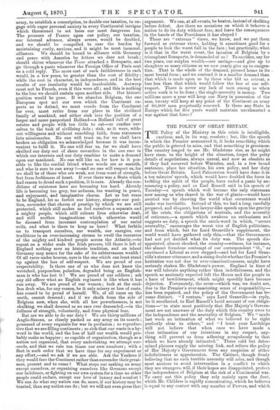 WHY WE OUGHT TO FIGHT FOR BELGIUM.

THE country has decided to defend Belgium, even if attacked by Prussia and France in combination, and the country has decided rightly. It has been guided mainly by an instinctive sense of its duty and its interest, by a feeling which it could no more analyze than a ploughman could analyze the reason why his eye shuts to keep out a glare ;. but reason will only deepen the resolve which instinct has suggested to be wise. One of the very few cases has arisen in which it is better for a great people to be beaten, and to endure the all but unendurable consequences of defeat, than to shrink from the duty to be done. We do not lay quite so much, stress as some of our statesmen probably will do upon the bare fact of the guarantee we gave in '31 and repeated in '39, for '39 is a long while ago, and we have guaranteed many things in our history which, from effiuxion of time, or change of circumstances, or modifications in opinion, we cer- tainly should make no effort to secure ; but the Treaty of England with Belgium is one which we are bound in honour to enforce. We not only made it in this generation, but we have been informally renewing it ever since. There never has been a time within all those years when the English Govern- ment, and Parliament, and Press has not publicly assumed, as one of the fixed facts of politics that England would arm to preserve the independence of her little ally. The political existence of Belgium has all that while been dependent upon a belief which we have officially and non-officially encouraged,. that in the one dangerous contingency we should stand her friend,—and that contingency has at last arisen. We are face to face with our obligation ; it is the very obligation we agreed to fulfil, and there is no want of entreaty from the weaker party that we should proceed to fulfil it. Belgium has done nothing to invalidate the compact, has given no pro- vocation, has shirked no duty, has exerted every power she has to make our task lighter, has remained from first to last what we hoped she would become—a free, progressive, orderly little State, only tempting to invaders because of her freedom,. her progress, and her prosperity. Every conceivable circum- stance which could make an agreement binding exists in the ease of Belgium. Our contract was made with eyes open, it has never been rescinded, formally or informally ; we possess the power to fulfil it, and even if our interest were more obscure, our duty would be manifest, and must be performed. For thirty years the independence of Belgium has made prosperity more possible in Britain, by diminishing the insurance we must otherwise have kept up ; and to desert her now is to re- ceive premiums for a generation, and then evade on false pre- tences payment of the money insured. As it happens, how- ever, it is our interest to pay. With Antwerp in the hands of a great military and naval power, splendidly organized, prompt to sudden enterprises, and utterly unscrupulous—a power such as France would be if Napoleon won the Rhine—we should not, indeed, be doomed—for long before we are doomed we will try what the world can do against the united Anglo-Saxon race—but we should be compelled by external danger to modify all internal institutions, to remodel ourselves into an

army, to establish a conscription, to double our taxation, to en- gage with eager personal anxiety in every Continental intrigue which threatened to set loose our most dangerous foe. The pressure of France upon our policy, our taxation, our internal advance, always severe, would be doubled, and we should be compelled to ease the burden by maintaining costly, anxious, and it might be most immoral, alliances. We should be bound to alliance with Germany and peace with America by fetters we dare not break ; should shiver whenever the Times attacked a Bonaparte, and go through a panic whenever the Foreign Office of Paris sent us a cold reply. The mere cost of such faithlessness in cash would, in a few years, be greater than the cost of fidelity ; while the cost in character, in independence, and in the best results of our insularity would be incalculable. Antwerp must not be French, even if this were all ; and this is nothing to the loss we should sustain upon another side. Our historic position would be gone. If we abandon Belgium, the one European spot not our own which the Continent ex- pects us to defend, we must recede from the Continent for ever, must retire from our place in the civilized family of mankind, and either sink into the position of a larger and more pauperized Holland—a Holland full of great estates and people with too little to eat—or confine our- selves to the task of civilizing Asia ; sink, as it were, with- -out willingness and without ennobling faith, from statesmen into missionaries. No one will trust us, for we shall have broken an obligation we acknowledged because it was incon- venient to fulfil it. No one will fear us, for we shall have skulked our duty out of sheer cowardice in the one case in which our interests and our duty combine to make a demand upon our manhood. No one will like us, for how is it pos- sible to like the cordial friend whose words are so smooth, and who is sure to run away ?—and no one will respect us, for we shall be of those who are weak, not from want of strength, but from feebleness of heart. If ever there was a State which had reason to dread such a position, it is ours. Already the con- .ditions of existence here are becoming too hard. Already life is becoming too grey, too arduous, too wanting in peace, and enjoyment, and imaginative charm. Let us but cease to be England, let us forfeit our history, abnegate our posi- tion, surrender that charm of prestige by which we are still protected, which still makes us feel ourselves a separate and a mighty people, which still colours lives otherwise drab, and still soothes imaginations which otherwise would be diseased from incessant contemplation of our social evils, and what is there to keep us here? What forbids as to transport ourselves, our wealth, our energies, our traditions in an ever-increasing stream to swell the resources .of the mighty and kindred people across the Atlantic,—to repeat on a wider scale the Irish process, till there is left of England nothing save an historic tradition, and an island Germany may annex for the sake of its subterranean wealth ? Of all races under heaven, ours is the one which can least stand .up against the loss of self-respect. We are proud of our respectability. Is there one of us who does not know the wretched, purposeless, pulseless, degraded being an English- man is who has lost it? We are proud of our soldiers ; ask any old officer what an English regiment is like when it has run away. We are proud of our women ; look at the soul- less drab who, for any reason, be it only misery or loss of caste, has ceased to be proud of herself. We, of all races on the earth, cannot descend ; and if we skulk from the side of Belgium now, when she, with all her powerlessness, is not skulking, we shall descend as no race ever descended,—in the fullness of strength, voluntarily, and from physical fear.

But are we able to do our duty ? We are thirty millions of Anglo-Saxons, as closely packed as any army on its march ; possessed of every requisite for war in profusion ; so reproduc- tive that we are filling continents ; so rich that our waste is a by- word in the world, and the loss of half our wealth would pro- bably make us happier ; so capable of organization, though as a nation not organized, that every undertaking we attempt suc- ceeds, and that we rule ten times our own numbers ; with a fleet in such order that we have time for any experiment or any effort,—and we ask if we are able. Ask the Yankees if they would face the Continent rather than surrender their great- ness, present and to come ? What stops our making an army except ourselves, or organizing ourselves like Germans except cur indolence, or fighting on our own system for a time no other people could endure, except our love of luxury and comfort? We can do what any nation can do, more, if our history may be trusted, than any nation can do ; but we will not even press that argument. We can, at all events, be beaten, instead of skulking before defeat. Are there no occasions on which it behoves a nation to do its duty without fear, and leave the consequences in the hands of the Providence it has obeyed ?

These are " extreme " views, we know, and we put them forward as extreme views, holding it sometimes good for a people to look the worst full in the face ; but practically, what is it that in the worst event, the invasion of Belgium by a triumphant Bonaparte, is demanded of us ? To sacrifice, say for two years, our surplus wealth—our savings—and give up to slaughter as many citizens as we now yearly give up to emigra- tion. That is the whole of the demand, pressed home in its . most brutal form ; and we contend it is a smaller demand than that which is made upon us by those who bid us retreat, a loss less than that which would follow the loss of our self- respect. There is never any lack of men among us when active work is to be done ; the single necessity is money. Two millions more a year will keep our Navy in possession of the seas, twenty will keep at any point of the Continent an army of 80,000 men perpetually renewed. Is there any State in Europe which for five years would maintain unexhausted a war against that force ?