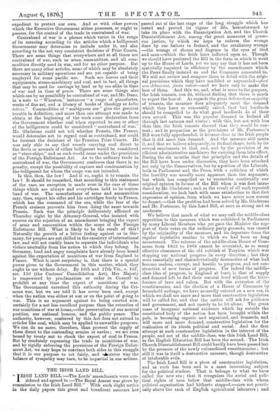 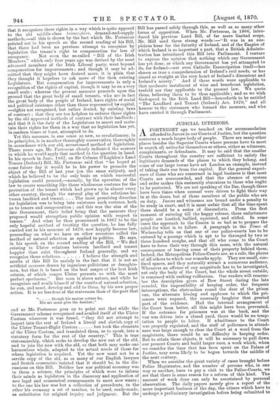 " f RISH LAND BILL :—The Lords' amendments were con- '. sidered and agreed to :—The Royal Assent was given by commission to the Irish Land Bill." With such slight notice in the daily papers this great and beneficent measure has

passed out of the last stage of the long struggle which has tested and proved its vigour of life, henceforward to take its place with the Emancipation Act, and the Church Disestablishment Act, among the great measures of gener- ous justice, by which we hope to redress the wrongs done by our fathers to Ireland, and the retaliatory wrongs —the wrongs of shame and disgrace in the eyes of God and man—which the Irish have inflicted upon us. Though we should have preferred the Bill in the form in which it went up to the House of Lords, yet we may say that it has not been materially impaired in efficiency by the amendments which the Peers finally insisted on and the Commons consented to. We will not review and compare them in detail with the origi- nal provisions which they have molified or superseded—fieri non debuerunt, facta valent—and we have only to make the best of them. And this we, and, what is more to the purpose, the Irish tenants, can do, without finding that there is much to regret the loss of. As regards the great defenceless majority of tenants, the measure does adequately meet the demand which they have so reasonably raised, that bad landlords should be compelled to do what good landlords do of their own accord. This was the popular demand in Ireland all through last autumn and winter ; with this, but not with less than this, the Irish tenants showed that they would be con- tent ; and in proportion as the provisions of Mr. Fortescue's Bill were fully apprehended, it became clear to the Irish people that it did meet this demand. And the measure still meets it, and that we believe adequately, in its final shape, both by its several enactments to that end, and by the provision of an efficient administrative machinery for carrying them into effect. During the six months that the principles and the details of the Bill have been under discussion, they have been attacked not only by the Conservatives, but by a portion of the Liberals, both in Parliament and the Press, with a criticism of which the hostility was usually more apparent than the argument, but which has compelled us to reconsider continually our original opinion in favour of the Bill when it was first intro- duced by Mr. Gladstone ; and, as the result of all such repeated consideration, we look back with some satisfaction to that first expression of opinion, from which we have never seen reason to depart,—that the problem had been solved by Mr. Gladstone and Mr. Fortescue, by this Land Bill, at once so strong and so moderate.

We believe that much of what we may call the middle-class opposition to this measure, which was exhibited in Parliament by many Liberal Members who yet gave the Minister the sup- port of their votes on the ordinary party grounds, was caused by the originality of the measure, and its departure from the regular legislative routine to which we had been so long accustomed. The reforms of the middle-class House of Com- mons from 1832 to 1868 cannot be overrated, as so many effective clearances of the old rubbish of Toryism which was stopping our national progress in every direction ; but they were essentially and characteristically destructive of what had become useless, corrupt, and hostile to progress, and not con- structive of new forms of progress. For indeed the middle- class idea of progress, in England at least, is that of supply and demand left to find their natural level without the inter- ference of laws and rulers. But with the extension of the constituencies, and the election of a House of Commons by household suffrage, we have assuredly entered on a new era, in which we shall see more and more that constructive legislation will be called for, and that the nation will ask for guidance and government, and not merely to be let alone. The great mass of inorganic national existence which lay outside the constituted body of the nation has been brought within the pale, is becoming organic and organized, and demands, and will more and more demand, constructive legislation for the realization of its ideals, political and social. And the first attempt at such constructive legislation in the interest of the people, and not of the middle-class, was this Irish Land Bill, as the English Education Bill has been the second. The Irish Church Disestablishment Bill could hardly have been passed but by the pressure of the newly enfranchised constituencies ; but still it was in itself a destructive measure, though destructive of intolerable evils.

The Irish Land Bill is a piece of constructive legislation, and as such has been and is a most interesting subject for the political student. That it belongs to what we have called the new era ; that it recognizes the social and poli- tical rights of men below that middle-class with whom political organization had hitherto stopped,—men not practi- cally above the rank of English agricultural labourers ; and that it recognizes these rights in a way which is quite opposed to the old middle-class laissez-fhire, demand-and-supply methods,—all this is shown by the fact which Mr. Fortescue pointed out in his speech on the second reading of his Bill, that there had been no previous attempt to recognize by legislation the tenant's right to compensation for loss of

occupancy. Not even the so-called "Bill of the Irish Members," which only four years ago was devised by the most advanced members of the Irish Liberal party, went beyond compensation for improvements ; and though it may be ad- mitted that they might have desired more, it is plain that they thought it hopeless to ask more of the then existing Legislature. But compensation for improvements is only a recognition of the rights of capital, though it may be on a very small scale ; whereas the present measure proceeds upon the ground that the great body of small tenants, who are in fact the great body of the people of Ireland, have rights of social and political existence other than those represented by capital, —rights not recognized, but rather denied, by existing laws of contract ; that they are too helpless to enforce those rights by the old approved methods of contract with their landlords ; and that it is the duty of the Legislature to assert and main- tain their rights for them in a way that no legislation has yet, in modern times at least, attempted to do.

Yet this measure, in one sense so new, so revolutionary, in its principles, is in another thoroughly conservative, thoroughly in accordance with our old, accustomed method of legislation. Three years ago, Mr. Fortescue clearly indicated the manner in which he would apply that method to the question in hand. In his speech in June, 1867, on Sir Colman O'Loghlen's Land Tenure (Ireland) Bill, Mr. Fortescue said that "he hoped at some future day it would be in his power to promote the object of the Bill of last year (on the same subject), and which he believed to be the only basis on which successful legislation could proceed,—namely, by the operation of the law to create something like those wholesome customs for the protection of the tenant which had grown up in almost every other country, through the natural play of the relations be- tween landlord and tenant. . . The most promising direction for legislation was to bring into existence such customs, both as to tenure and compensation ; and this was the aim of the late Government, their belief being that the measure they proposed would strengthen public opinion with respect to tenure." And what he thus pronounced in 1867 to be the only hopeful method of treating the question, he has fully carried out in his measure of 1870, now happily become law, proceeding on what we have on other occasions called the method of natural selection as applied to politics. He says, in his speech on the second reading of the Bill, "We find existing in Ulster relations between landlord and tenant happier than exist throughout Ireland generally, and we

recognize those relations I believe the strength and merits of this Bill lie mainly in the fact that it is not an artificial measure drawn by ingenious politicians or draughts- men, but that it is based on the best usages of the best Irish estates, of which usages Ulster presents us with the most perfect specimens." But man is above nature, and while he recognizes and avails himself of the results of natural selection, he can, and must, develop and add to them, by his own proper action. It is no less true of the statesman than of the poet that

. . . though big matter nature be, His art mint give the fashion ;"

and so Mr. Fortescue goes on to point out that while the Government scheme recognized and availed itself of the Ulster Custom wherever it was found, "they did not attempt to import into the rest of Jreland a literal and slavish copy of

the Ulster Tenant-Right Custom but took the elements of the Ulster Custom, and translated them, so to speak, into a statutory form for the rest of the country." This is true statesmanship, which seeks to develop the new out of the old, and to join the new with the old, so that both may make one harmonious whole, adapted to the actual needs of those for whom legislation is required. Yet the new must not be a servile copy of the old, as so many of our English lawyers and Scotch economists insisted that it should be, in the dis- cussions on this Bill. Neither law nor political economy was to them a science, the principles of which were to inform their minds as legislators in the discovery and application of new legal and economical arrangements to meet new wants ; to the one his law was but a collection of precedents, to the other his economy a set of maxims, to be used, ready-made, as substitutes for original inquiry and judgment. But the

Bill has passed safely through this, as well as so many other forms of opposition. When Mr. Fortescue, in 1866, intro- duced his previous Land Bill, of far more limited scope, Mr. Mill used these strong words :—"It was in an aus- picious hour for the futurity of Ireland, and of the Empire of which Ireland is so important a part, that a British Adminis- tration has introduced this Bill into Parliament. I venture to express the opinion that nothing which any Government has yet done, or which any Government has yet attempted to do, for Ireland—not even Catholic Emancipation itself—has shown so true a comprehension of Ireland's real needs, or has aimed so straight at the very heart of Ireland's discontent and Ireland's misery." And if these words were applicable to that moderate instalment of wise and beneficent legislation, tenfold are they applicable to the present law. We quote them, believing them to be thus applicable ; and so we wish God-speed to the Irish Land Bill—henceforth to be entitled The Landlord and Tenant (Ireland) Act, 1870," and all honour to the statesmen who framed the measure, and who have carried it through Parliament.