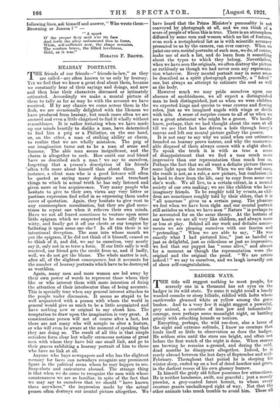 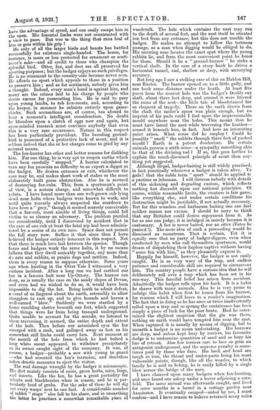 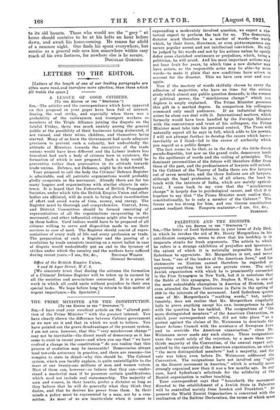 BADGER WAYS. T HE title will suggest nothing to most people,

for scarcely one in a thousand has set eyes on the badger in its wild state. To some it might recall a lonely wooded coombe or steep hillside, riddled with holts whose earthworks gleamed white or yellow among the gorse bushes. And to a very few it might suggest a powerful, grey animal, a creature of iron jaw and indomitable courage, seen perhaps some moonlight night, or -battling grimly with attacking hounds or terriers. Excepting, perhaps, the wild roe-deer, also a lover of the night and extreme solitude, I know no creature that lends itself so little to -observation as does the badger. He seldom stirs until the stars are bright, and often not before the first watch of the night is done. When storms are brewing he remains a-ground, and during the cold, dead months he disappears altogether. Indeed, he is rarely abroad between the last days of September and mid- February. Throughout that period he is sleeping his winter sleep, curled up on a bed of dried heather and grass, in the darkest recess of his own gloomy burrow. In himself the grisly old fellow possesses few attractions. He is neither handsome, swift, nor graceful ; just a moody prowler, a grey-coated forest hermit, to whom every creature grants unchallenged right of way. Not that the other animals take much trouble to avoid him. These all lave the advantage of speed, and can easily escape him in the open. His fossorial limbs were not constructed with a view to pace. But woe to the thing that runs foul of him or gets within his grip. He only of all the larger birds and beasts has battled successfully for existence single-handed. The heron, for instance, is more or less protected for ornament or senti- ment's sake--and all credit to those who champion the splendid bird. Otter, fox, and deer are all preserved for sporting purposes; but the badger enjoys no such privileges. He is no ornament to the country-side because never seen. He affords no sport which appeals to those in a position to preserve him ; and as for sentiment, nobody gives him a thought. Indeed, every man's hand is against him, and many are the crimes laid to his charge by people who desire excuse for persecuting him. He is said to prey upon young lambs, to rob hen-roosts, and, according to the keeper, in summer he subsists entirely upon game- chicks. Such accusations are, of course, too absurd to bear a moment's intelligent consideration. No doubt he blunders upon a clutch of eggs now and again, but open-minded research must convince anybody that even this is a very rare occurrence. Nature in this respect has been particularly provident. The brooding ground- bird is possessed of a protective lack of scent, and it is seldom indeed that she or her charges come to grief by any natural means.

The fox-hunter has other and better reasons for disliking him. For one thing, he is very apt to reopen earths which have been carefully " stopped." A barrier calculated to turn any fox presents no difficulty to so expert a digger as the badger. He desires entrance or exit, whichever the case may be, and makes short work of stakes or the most elaborately built gorse obstruction. Also he is accused. of destroying fox-cubs. This, from a sportsman's point of view, is a serious charge, and somewhat difficult to. refute. I have found more than one well-grown cub lying dead near holts where badgers were known to work, and until quite recently always suspected the murderer to have been a " grey, though it seemed scarcely conceivable that a fox-cub, most nimble of living things, could fall victim to so clumsy an adversary. The problem puzzled me considerably, until I discovered by accident that in the case of one cub at least the fatal nip had been adminis- tered by a senior of its own race. Space does not permit the full story now. Suffice it that since then I have believed the badger entirely innocent in this respect. Not that there is much love lost between the species. Though foxes and badgers work the same holts, it by no means follows that they dwell amicably together, any more than da rats and rabbits, or prairie dogs and rattlers. Indeed, there is every reason to suppose otherwise. Some years ago when hunting in the Otter Vale I witnessed a very curious incident. After a long run we had earthed our fox in a famous holt near Up-Ottery. The burrow ran deep, as is usually the case on the sandy slopes of Devon, and even had we wished to do so, it would have been impossible to dig the fox. Being loath to admit defeat, weral of us lingered about the earth, ostensibly to allow stragglers to cast up, and to give hounds and horses a well-earned " blow." Suddenly we were startled by a fierce rumbling clatter beneath our feet, which suggested that things were far from being tranquil underground. Quite unable to account for the sounds, we listened to them traversing, it seemed, the entire depth and extent of the holt. Then before our astonished eyes the fox emerged with a rush, and galloped away as fast as his somewhat stiff limbs could carry him. Next moment at the mouth of the hole from which he had bolted a, long white snout appeared, to withdraw precipitately as its- owner caught sight of the company. It was, of course, a badger—probably a sow with young to guard, —who had resented the fox's intrusion, and doubtless taken drastic measures to eject the visitor. The real damage wrought by the badger is microscopic. His diet mainly consists of roots, green herbs, mice, frogs, and insects. Like the fox, he has a great partiality for whorts and blackberries when in season, and he is par- ticularly fond of grubs. For the sake of these he will dig Out every wasps' nest he can find. A considerable number of rabbit " stops " also fall to his share, and in unearthing the latter he practises a somewhat remarkable piece of woodcraft. The hole which contains the nest may run to the depth of several feet, and the nest itself be situated ten feet from any entrance, but this does not trouble the badger. He makes no attempt to follow the tortuous passage, as a man when digging would be obliged to do. His unerring nose locates the exact spot where the young rabbits lie, and from the most convenient point he bores for them. Should it be a " ground-burrow " he sinks a vertical shaft. In the case of a steep bank he drives a horizontal tunnel, and, shallow or deep, with unvarying accuracy.

Not long ago I saw a striking case of this on Heiden Hill, near Exeter. The burrow opened on to a little gully, and ran back some distance under the heath. At least five paces from the nearest hole was the badger's freshly cut shaft, about three feet deep, and around it were littered the ruins of the nest—the little tale of bloodstained fur so eloquent of tragedy. There on the earth drawn from the shaft the raider's spoor was plain enough, but no imprint of his pads could I find upon the impressionable mould anywhere near the holes. This meant that ho must have found the nest while traversing the heather— sensed it beneath him, in fact. And here an interesting point arises. What sense did he employ I Could he possibly " smell " the rabbits through three feet of packed mould ? Earth is a potent deodorizer. Do certain animals possess a sixth sense—a sympathy something akin to that of the divining rod ? If so, this goes farther to explain the much-discussed principle of scent than any- thing yet suggested. Although illegal, badger-baiting is still widely practised, in fact practically whenever a badger is taken alive. Ye gods ! that the noble term " sport " should be applied tc a pastime so inhuman. I will distress nobody with details of this sickening and degrading custom, which reflects nothing but discredit upon our national principles. Of course, within reasonable limits, the creature is fair game, like everything else, and under certain conditions his destruction might be justifiable, if not actually necessary. But for this senseless and barbarous baiting one can find neither reason nor excuse. I should be sorry to think that any Britisher could derive enjoyment from it. As far as one can judge, it is indulged in merely because it is customary. A fox is never baited, nor an otter (Fates be praised !). The mere idea of such a proceeding would be dismissed as monstrous. That is certain. Yet it is equally sure that no party of badger-diggers, even when conducted by men who call themselves sportsmen, would dream of dispatching their hapless captive without having " some fun with him," as they pleasantly express it. Happily for himself, however, the badger is not easily caught. He is so very wary of the trap, and endless patience and considerable skill are required to circumvent him. The country people have a curious idea that ho will deliberately roll over a trap which has been set in his run-way. This fanciful belief has arisen from accident. Admittedly the badger rolls upon his back. It is a habit he shares with many animals. Also he is very prone to indulge this habit when first he issues from his burrow, for reasons which I will leave to a reader's imagination. The fact that in doing so he has once or twice inadvertently rolled upon a trap and so sprung the contrivance has been simply a piece of luck for the poor brute. Had he enter- tained the slightest suspicion that the gin was there, nothing on earth would have tempted him near the spot. When captured it is usually by means of digging, but to unearth a badger is no mean undertaking. His burrows are deep, and unless kept busy by terriers, his favourite dodge is to undermine quantities of sand and so bury his line of retreat. Also few terriers care to face so grim an antagonist underground, and the supreme penalty is some- times paid by those who dare. His back and head are tough as iron, the throat and under-parts being his most vulnerable points, though, like all the weasles, to which family he is said to belong, he is easily killed by a single blow across the bridge of the nose. I have chanced upon many badgers when fox-hunting, and once found one asleep under a hover adjoining a corn- field. The same animal was afterwards caught, and lived for some months in a barrel in a cottage garden near Axminster. It eventually escaped—aided by me, I must confess—and I have reason to believe returned many miles to its old haunts. Those who would see the " grey " at home should contrive to be at his bolts an hour before dawn, and await his home-coming. He roams far afield of a summer night. One finds his spoor everywhere, but sunrise as a general rule sees him somewhere within easy reach of his own fastness, for nowhere else is he secure.