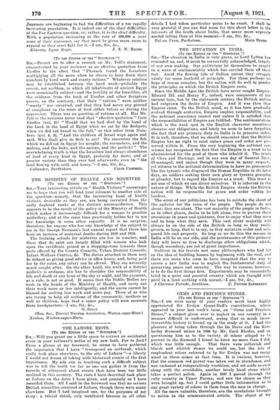 THE SITUATION IN INDIA.

Sia,—The situation in. India is very grave, as Lord .Lytton has reminded us, and, it must be sorrowfully acknowledged, largely of our own making. Our politicians let themselves :be caught in a wave of sentimentality which has carried them off their feet. Amid the flowing tide of Indian unrest 'they struggle vainly for some foothold of principle. For them perhaps no hope of rescue remains, but the nation will do well to ponder the principles on which the British Empire rests.

Since the Middle Ages the British have never sought Empire. Edward III. and Henry V., indeed, were conquerors of the ancient type, but by the eighteenth century the British nation had outgrown the desire of Empire. And it was then that Empire came. To the British mind, as it has been gradually evolved through centuries, Empire implies responsibility, and the national conscience cannot rest unless it is satisfied that the responsibilities of Empire are fulfilled. The sentimentalism which is the weak spot in the English character sometimes obscures our obligations, and lately we seem to have forgotten the fact that our primary duty to India is to preserve order. It is well, therefore, that we should remember that the British Empire has no right to exist unless peace and order are pre- served within it. From the very beginning the national con- science has recognized the fact that the Empire is a trust to be administered for the good of those who inhabit it. The trials of Clive and Hastings, and in our own day of General Dyer, ill-managed, and unjust though they were in many respects, yet witness to the national determination to have no proconsuls like the tyrants who disgraced the Roman Republic in its later days, no soldiers seeking their own glory or tyrants grasping at plunder, but to regard the Empire as a trust. This trust is not one of which we can divest ourselves. It is inherent in the nature of things. While the British Empire stands the British nation will be responsible for peace and order within its borders.

The error of our politicians has been to mistake the shout of the agitator for the voice of the people. The people do not shout; they are silent. The vast majority of the people in India, as in other places, desire to be left alone, free to pursue their• avocations in peace and quietness, free to enjoy what they earn and to keep what they save. This vast silent majority will always be on the side of the .British so long as they realty govern, so long, that is to say, as they maintain order and safe- guard life and property. .So long as we do this the masses in India will be on our side, and the performance of this primary duty will leave us free to discharge other obligations which, though secondary, are yet of great importance.

Gulliver in his travels met some philosophers who had hit on the idea of building houses by beginning with the roof, and there are some who seem to have imagined that the way to create a new India was to neglect the fundamental duty of preserving peace and security. The way to success, however, is to do the first things first. Experiments may be successfully tried in a quiet and peaceful country which are fraught with peril in a land seething with unrest.—I am, Sir, &c.,