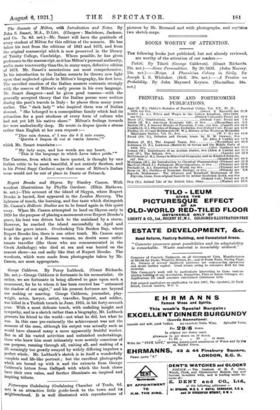 Rupert Brooke and Skyros. By Stanley Casson. With woodcut illustrations

by Phyllis Gardner. (Elkin Mathews. 6s. net.)—This account of the island of Skyros, where Rupert Brooke is buried, first appeared in the La/Jon Mercury. The lightness of touch, the learning, and fine taste which distinguish Mr. Casson's Hellenic Studies are to be found again in this quiet essay. When Mr. Casson attempted to land on Skyros early in 1920 for the purpose of placing a monument over Rupert Brooke's grave, his boat was driven back to the mainland by a storm. However, he reached the island successfully in April and found the grave intact. Overlooking Tris Boukes Bay, where Rupert Brooke lies, there is one other tomb. Mr. Casson says it is the grave of a Roman woman, no doubt some unfor- tunate traveller (like those who are commemorated in the Greek Anthology) who died at sea and was buried on the nearest shore—an end sadly like that of Rupert Brooke. The woodcuts, which were made from photographs taken by Mr. Casson, are most appropriate.