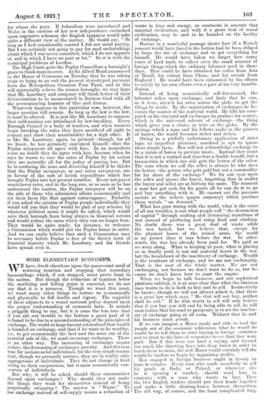 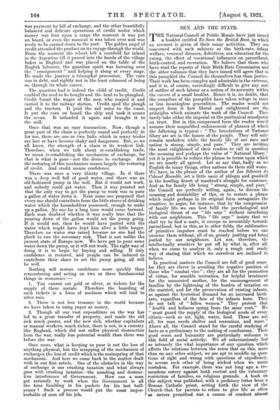 WE have dwelt elsewhere upon the paramount need of reducing taxation and stopping that secondary haemorrhage which, if not stopped, must prove fatal to the nation. But though the reduction of taxation below the sterilizing and killing point is essential, we do not say that it is a panacea. Though we want this most, we want many other things to restore us economically and physically to full health and vigour. The majority of these adjuncts to a sound national policy depend upon the proper understanding of economic laws. It sounds a priggish thing to say, but it is none the less true that if you sift. our trouble to the bottom a great part of it is found to be due to a misunderstanding of the principles of exchange. The world at large has not yet realized that wealth is founded on exchange, and that if we want to be wealthy, i.e., to get economically the best and the most out of the material side of life, we must encourage exchanges. There is no other way. The increasing of exchanges means riches ; the decreasing of exchanges poverty. And this is as true for nations as for individuals, for the very simple reason that, though we personify nations, they are in reality only aggregations of individuals. They do not change in kind owing to their conjunction, but remain economically con- courses of individuals.

But why, it will be asked, should these communities depend upon exchanges ? Why should they not make the things they want for themselves instead of being perpetually swapping ? The answer is " Waste." To use exchange instead of sell-supply means a reduction of waste in time and energy, so enormous in amount that material civilization, and with it a great deal of moral, civilization, may be said to be founded on the facility of exchange.

Bastiat in a wonderful passage shows how ill a French peasant would have fared in the forties had he been obliged to forgo the use of exchange and to get everything for himself. He would have taken we forget how many years of hard trade to collect even the small amount of foreign things which the ordinary labourer used in those days. How could he have obtained his coffee from Asia or Brazil, his cotton from China, and his metals from England ? He would have been exhausted by his efforts to satisfy by his own efforts even a part of his very humble desires.

Instead of being economically sell-determined, the labourer relies upon exchange, and finds that he can, as it were, stretch his arms across the globe to get the things he needs. By the organization of exchanges he be- comes the master of the material world. He tills his corn- patch or his vineyard and exchanges its produce for money, which is the universal solvent of exchange--the thing which gives you a choice as wide as the globe. By the savings which a man and his fellows make in the process of barter, the world becomes richer and richer.

Owing to a pitifully unfortunate application of strict logic to imperfect premises, mankind is apt to ignore these simple facts. Men will not acknowledge exchange to be a union of forces to prevent waste. Instead they insist that it is not a mutual and therefore a double benefit, but a transaction in which one side gets the better of the other. The man whom we call the seller is always he who does the better—the person who gets gold but not a commodity for his share of the exchange ! We fix our eyes upon the seller and ignore the buyer, forgetting that in reality the buyer and seller are at bottom the same. The moment a man has got cash for his goods all he can do is to go and buy something with it. He cannot eat the precious metals or the tickets (paper currency) which produce these metals " on demand.

What has gone wrong with the world, what is the cause of all our troubles, is not what people call "'the destruction of capital " through making and destroying munitions of war instead of producing and using food and clothing. No doubt there was a great deal of waste while the war lasted, but we believe that, except for the physical losses of the ruined areas, the world is no poorer than it was before the war. In other. words, the war has already been paid for. We paid as we went along. What is keeping us poor; what is plating us in deadly peril, is not our material losses in the war, but the breakdown of the machinery of exchange. Wealth is the resultant of exchange, and we are not exchanging. That is the root of the whole matter. We are not exchanging, not because we don't want to do so, but be- cause we don't know how to start the engine. When we begin to talk business, and not sophistical platform rubbish, it is at once clear that what the business man wants to do is both to buy and to sell. Instinctively he knows, though we will not always admit it, that there is a great law which says, " He that will not buy, neither shall he sell." If he who wants to sell will only believe that if you buy you will end by being able to sell, he will soon realize that his road to prosperity is to set the machin- ery of exchange going at all costs. Without that he and his business must perish. If we can imagine a Moses ready and able to lead the people out of the economic wilderness, what he would do would be to tell them to start buying in foreign countries and to trust to the laws of economics to see that they were paid. But if this were too hard a saying, and seemed too much like throwing boys into deep water in order to teach them to swim, the new Moses would certainly tell the would-be traders to begin by organizing credits.

Men engaged in foreign business ought in theory to hunt in couples. Every man who sends somebody to sell his goods in Italy, or Poland, or wherever else he is opening a market, should send him in company with a man who wants to buy. Then the two English traders should put their heads together and make a. little clearing-house between themselves. The old way, of course, and the least complicated way, was payment by bill of exchange, and the other beautifully balanced and delicate operations of credit under which Money was lent upon a cargo the moment it was put on board, or even the moment it was taken over and was ready to be carried down to the port. The golden angel of credit attended the product on its voyage through the world. From the moment the wheat left a cornfield far inland in the Argentine till it passed into the hands of the village baker in England and was placed on the table of the English labourer, the guardian spirit was hovering over the " consignment " and helping it along at every stage. He made the journey a triumphal procession. The corn was in debt, and rightly not in the least ashamed of being so, through its whole career.

The quartern loaf is indeed the child of credit. Credit enabled the seed to be bought and the land to be ploughed. Credit found the wages of the men who reaped it and carried it to the railway station. Credit sped the plough and the tractors. It paid the rail rates to the coast. It put the corn on board the ship and took it across the ocean. It unloaded it again and brought it to the mill.

Once that was an easy transaction. Now, though a great part of the chain is perfectly sound and perfectly fit for use, there are one or two links which in many trades are lost or have become shaky and dangerous. But, as we all know, the strength of a chain is its weakest link. Therefore, when we talk about re-establishing trade, we mean re-establishing the mechanism of exchange, for that is what is gone—not the desire to exchange. And the restorina° of this mechanism means largely the restoring of credit. And credit means confidence.

There was once a very thirsty village. In it there was a deep well full of good water, and there was an old-fashioned pump in the well. But it would not work, and nobody could get water. Then it was pointed out that the only way to get the pump to work was to pour a gallon of water down it. Next some one proposed that every one should contribute from the little stores of drinking water which the householders possessed, enough to make up a gallon. No one for a long time would come forward. Each man doubted whether it was really true that the pouring down of the gallon would set the pump going. If it would not, then he would have parted with the water which might have kept him alive a little longer. Therefore no water was raised because no one had the pluck to run the necessary risk. That is not unlike the present state of Europe now We have got to pour some water down the pump, or it will not work. The right way of doing it is to begin by buying and selling. If only confidence is restored, and people can be induced to contribute their share to set the pump going, all will be well.

Nothing will restore confidence more quickly than remembering and acting on two or three fundamental things in economics :- 1. You cannot eat gold or silver, or tickets for the supply of these metals. Therefore the hoarding of such tickets is a form of madness which will lead to utter ruin.

2. There is not less treasure in the world because we have taken to using paper as money.

3. Though all our vast expenditure on the war has led to a great transfer of property, and made the old rich much poorer, and the new rich, whether capitalists or manual workers, much richer, there is not, in a country like England, which did not suffer physical destruction from the war, really less potential wealth than there was before the war.

Once more, what is keeping us poor is not the loss of anything physical, but the scrapping of the mechanism of exchanges, the loss of credit which is the mainspring of that mechanism. And here we come back to the matter dealt with in our first article. One of the obstacles in the way of exchange is our crushing taxation and what always goes with crushing taxation—the numbing and destruc- tive interference of Government. How can a man get seriously to work when the Government is all the time fumbling in his pockets for his last half- penny ? Such a process would put the most imper- turbable of men off his job.