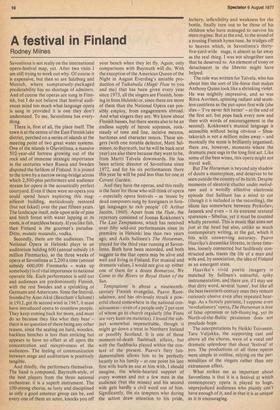 A festival in Finland

Savonlinna is not really on the international opera-festival map, yet. After two visits I am still trying to work out why. Of course it is expensive, but then so are Salzburg and Munich, where sumptuously-packaged predictability has no shortage of admirers. And of course the operas are sung in Finnish, but I do not believe that festival audiences mind too much what language opera is sung in provided it is one they don't understand. To me, Savonlinna has everything.

There is, first of all, 'the place itself. The town is at the centre of the East Finnish lake district, perched on a series of islands at the meeting point of two great water systems. One of the islands is Olavinlinna, a massive 502-year-old fortress growing out of the rock and of immense strategic importance in the centuries when Russia and Sweden disputed the fiefdom of Finland. It is joined to the town by a narrow swing-bridge across which 2,500-plus performers and audience stream for opera in the acoustically perfect courtyard. Even if there were no opera you could spend hours exploring this magnificent building, meticulously restored (but not faked) over the past fifteen years. The landscape itself, mile upon mile of pine and birch forest with water lapping at its roots, is of matchless beauty. If you like fish, then Finland is the gourmet's paradise. Ditto, mutatis mutandis, vodka.

Secondly, there are the audiences. The National Opera in Helsinki plays in an auditorium holding 600 (annual subsidy 16 million Finnmarks), so the three weeks of opera at Savonlinna at 2,200 a time (annual subsidy 600,000 Finnmarks — wake up somebody) is of vital importance to national operatic life. Each performance is sold out and audiences are predominantly Finnish, with the rest Swedes and a sprinkling of Germans and Americans. Since the festival, founded by Aino Akte (Beecham's Salome) in 1912, got its second wind in 1967, it must have introduced opera to countless people. They keep coming back for more, and must do so because they like what they hear — there is no question of there being any other reason, since the seating on hard, wooden, backless benches is less than enticing but appears to have no effect at all upon the concentration and receptiveness of the audiences. The feeling of communication between stage and auditorium is positively tangible.

And thirdly, the performers themselves. The band is composed, Bayreuth-style, of the best players from the three national orchestras; it is a superb instrument. The 100-strong chorus, as lusty and disciplined as only a good amateur group can be, and every one of them an actor, knocks you off your bench when they let fly. Again, only comparisons with Bayreuth will do. With the exception of the American Queen of the Night in August Everding's amiable production of Taikahuilu (Magic Flute to you and me) that has been given every year since 1973, all the singers are Finnish, homing in from Helsinki or, since there are more of them than the National Opera can possibly employ, from engagements abroad. And what singers they are. We know about Finnish basses, but there seems also to be an endless supply of heroic sopranos, rocksteady of tone and line, incisive mezzos, baritones and character tenors. These singers (with one notable defector, Matti Salminen, to Bayreuth, but he will be back next year) are also there because they want to be, from Martti Talvela downwards. He has been artistic director of Savonlinna since 1972, and for his six performances there this year he will be paid less than for one at Covent Garden.

And they have the operas, and this really is the facer for those who still think of opera — especially opera festivals — as 'music by dead composers sung by foreigners in foreign languages to rich people' (C) Arthur Jacobs, 1960). Apart from the Flute, the repertory consisted of Joonas Kokkonen's The Last Temptations, which has received over fifty sold-out performances since its premiere in Helsinki less than two years ago, and Aulis Sallinen's The Horseman, played for the third year running at Savonlinna. Both have been recorded, and both suggest to me that opera may be alive and well and living in Finland. For musical and dramatic values, I would not give up either one of them for a dozen Bornarzos, We Come to the Rivers or Royal Hunts of the Sun.

Temptations is about a nineteenthcentury Finnish evangelist, Paavo Ruotsalainen, and has obviously struck a powerful chord somewhere in the national consciousness — even of a people only-2 per cent of whom go to church regularly (the Finns are very keen on statistics). I found the subject somewhat impenetrable, though it might go down a treat in Northern Ireland or possibly Scotland. It is one of those moment-of-death flashback affairs, but with the flashbacks played within the context of the present. Paavo's fiery fundamentalism allows him to be perfectly beastly to his family — at one point his late first wife hurls an axe at him with, I should imagine, the whole-hearted support of every woman and not a few men in The audience (but she misses) and his second Wife gets hardly a civil word out of him. Significantly, the six tempters who during the action draw attention to his pride,

lechery, inflexibility and weakness for the bottle, finally turn out to be those of his children who have managed to survive his stern regime. But at the end, to the sound of a rousing Finnish hymn tune, he trudges off to heaven which, in Savonlinna's thirtyfive-yard-wide stage, is almost as far away as the real thing. I was not altogether sure that he deserved to. An element of irony or detachment in the libretto might have helped.

The role was written for Talvela, who has about him the sort of life-force that makes Anthony Quinn look like a shrinking violet. He was mightily impressive, and so was Ritva Auvinen, spinning radiant and seamless cantilena as the put-upon first wife (she dies — 'I've never felt better' — at the end of the first act, but pops back every now and then with words of encouragement in the second). Kokkonen's musical language is accessible without being obvious — Shostakovich is not a million miles away — and musically the score is brilliantly organised; there are, however, moments Where the dramatic pace sags in the long first act. Like some of the best wines, this opera might not travel well.

But The Horseman is beyond any shadow of doubt a masterpiece, and deerves to be seen outside the country of its birth. Despite moments of aleatoric chatter under melodram and a weirdly effective electronic episode that Sallinen has a mind to cut (though it is included in the recording), the idiom lies somewhere between Prokofiev; Janacek and even — it its extreme textural spareness — Sibelius, yet it must be counted wholly personal. This is music that aims not just at the head but also, unlike so much contemporary writing, at the gut, which it hits with unswerving accuracy. Paavo Haaviko's dreamlike libretto, in three timeless, loosely connected but faultlessly constructed acts, traces the life of a man and wife and, by association, the idea of Finland as an emergent state.

Haaviko's vivid poetic imagery is matched by Sallinen's colourful, spiky instrumentation, and there are, if I may use that dirty word, several 'tunes', but like all the best twentieth-century ones they remain curiously elusive even after repeated hearings. As a fiercely patriotic, I suppose even 'revolutionary' opera, The Horseman is free of false optimism or tub-thumping, yet its North-of-the-Baltic pessimism does not preclude hope.

The interpretations by Heikki Toivanen, Taru Valjakka, the supporting cast and above all the chorus, were of a vocal and dramatic splendour that shout 'festival' at you. The productions of all three operas were simple in outline, relying on the personalities of the singers rather than any extraneous effect.

What strikes me as important about Savonlinna is that it is a festival at which contemporary opera is played to huge, unprejudiced audiences who plainly can't have enough of it, and in that it is as unique as it is encouraging.