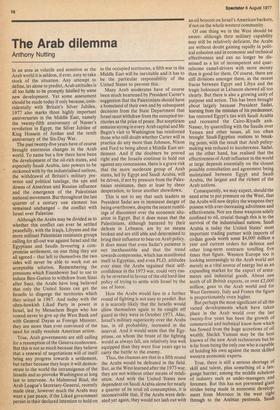 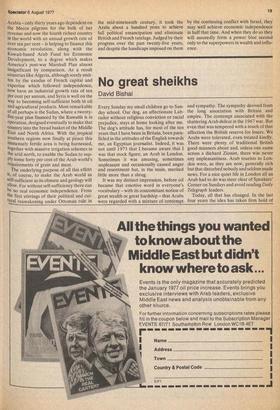 In an area as volatile and sensitive as the Arab world it is seldom, if ever, easy to take stock of the situation. Any attempt to define, let alone to predict, Arab attitudes is all too liable to be promptly falsified by some new development. Yet some assessment should be made today if only because, coincidentally with Britain's Silver Jubilee, 1977 also marks three highly important anniversaries in the Middle East, namely the twenty-fifth anniversary of Nasser's revolution in Egypt, the Silver Jubilee of King Hussein of Jordan and the tenth anniversary of the Six-Day War.

The past twenty-five years have of course brought enormous changes in the Arab world. To name but a few there have been the development of the oil-rich states, and especially Saudi Arabia, into powers to be reckoned with by the industrialised nations, the withdrawal of Britain's military presence and political tutelage, the ups and downs of American and Russian influence and the emergence of the Palestinian national movement. But throughout the last quarter of a century one element has remained unchanged — the conflict with Israel over Palestine.

Although the Arabs may be divided as to whether this conflict can ever be settled peacefully, with the Iraqis, Libyans and the more militant Palestinian resistance groups calling for all-out war against Israel and the Egyptians and Saudis favouring a compromise settlement, on one thing they are all agreed — that left to themselves the two sides will never be able to work out an acceptable solution. Remembering the pressures which Eisenhower had to use to induce Ben-Gurion to withdraw from Sinai after Suez, the Arabs have long believed that only the United States can get the Israelis to disgorge the territories which they seized in 1967. And today with the ultra-hawkish Likud Party in power in Israel, led by Menachem Begin who has vowed never to give up the West Bank and with General Dayan as Foreign Minister, they are more than ever convinced of the need for really resolute American action.

True, Arab governments are still calling for a resumption of the Geneva conference. But this is not so much because they believe that a renewal of negotiations will of itself bring any progress towards a settlement, but rather because they hope it will demonstrate to the world the intransigence of the Israelis and so provoke Washington at long last to intervene. As Mahmoud Riad, the Arab League's Secretary-General, recently made clear, however much the Arabs may want a just peace, if the Likud government persist in their declared intention to hold on to the occupied territories, a fifth war in the Middle East will be inevitable and it has to be the particular responsibility of the United States to prevent this.

Many Arab moderates have of course been much heartened by President Carter's suggestion that the Palestinians should have a homeland of their own and by subsequent decisions from the State Department that Israel must withdraw from the occupied territories as the price of peace. But scepticism remains strong in every Arab capital and Mr Begin's visit to Washington has reinforced those who still doubt whether Carter will in practice do any more than Johnson, Nixon and Ford to bring about a Middle East settlement. And if the doubters be proved right and the Israelis continue to hold out against any concessions, there is a grave risk that the more moderate group of Arab states, led by Egypt and Saudi Arabia, will be driven, if not by pressure from the Palestinian resistance, then at least by sheer desperation, to force another showdown.

This is not to say that such leaders as President Sadat are in imminent danger of being overthrown, despite the recent rumblings of discontent over the economic situation in Egypt. But it does mean that the Palestinians, although battered by their defeats in Lebanon, are by no means broken and are still able and determined to bring their influence to bear on Arab policy. It does mean that even Sadat's patience is not inexhaustible and that the trend towards compromise, which has manifested itself in Egyptian, and even PLO, attitudes ever since the Arabs regained their selfconfidence in the 1973 war, could very easily be reversed in favour of the old hard-line policy of trying to settle with Israel by the use of force.

How the Arabs would fare in a further round of fighting is not easy to predict. But it is scarcely likely that the Israelis would allow themselves again to be caught off guard as they were in October 1973. Also, Israel's military superiority over the Arabs has, in all probability, increased in the interval. And it would seem that the Egyptians, on whom the brunt of the fighting would as always fall, are relatively less well equipped than they were four years ago to carry the battle to the enemy.

Thus, the chances are that in a fifth round the Arabs would be defeated in the field. But, as the West learned after the 1973 war, they are not without other means of retaliation. And with the United States now dependent on Saudi Arabia alone for nearly a quarter of its total oil consumption, it is inconceivable that, if the Arabs were defeated yet again, they would not lash out with an oil boycott on Israel's American backers, if not on the whole western community.

Of one thing we in the West should be aware: although their military capability may still be relatively deficient, the Arabs are without doubt gaining rapidly in political cohesion and in economic and technical effectiveness and can no longer be dismissed as a lot of incompetent and quarrelsome camel-drivers with more money than is good for them. Of course, there are still divisions amongst them, as the recent fracas between Egypt and Libya and the tragic holocaust in Lebanon showed all too clearly. But there is also a growing unity of purpose and action. This has been brought about largely because President Sadat, learning from the mistakes of his predecessor, has restored Egypt's ties with Saudi Arabia and recreated the Cairo-Riyadh axis. Nasser, by quarrelling with the Saudis over Yemen and other issues, all too often brought Saudi-Egyptian reations to breaking point, with the result that Arab policymaking was reduced to incoherence. Sadat, on the other hand, has realised that the effectiveness of Arab influence in the world at large depends essentially on the closest possible consultation and agreement being maintained between Egypt and Saudi Arabia, the largest and the richest of the Arab nations.

Consequently, we may expect, should the need arise to put pressure on the West, that the Arabs will now deploy the weapons they possess with ever-increasing adroitness and effectiveness. Nor are these weapons solely confined to oil, crucial though this is to the survival of the industrialised nations. Saudi Arabia is today the United States' most important trading partner with imports of civilian goods worth some $4,000 million a year and current orders for defence and other long-term contracts totalling five times that figure. Western Europe too is looking increasingly to the Arab world not merely as a vital source of energy but as an expanding market for the export of armaments and industrial goods. About one tenth of all British exports, or over £2,000 million, goes to the Arab world and for West Germany, Italy and France the figure is proportionately even higher.

But perhaps the most significant of all the varied developments which have taken place in the Arab world over the last twenty-five years has been the growth of commercial and technical know-how which has flowed from the huge accretions of oil wealth. Sheikh Yamani may be the best known of the new Arab technocrats but he is far from being the only one who is capable of holding his own against the most skilled western economic experts.

True, there is still a serious shortage of skill and talent, plus something of a language barrier, among the middle echelons of industry such as under-managers and foremen. But this has not prevented giant strides being made in economic development from Morocco in the west right through to the Arabian peninsula. Saudi Arabia only thirty years ago dependent on the Mecca pilgrims for the bulk of her revenue and now the fourth richest country in the world with an annual growth rate of over ten per cent — is helping to finance this economic revolution, along with the Kuwait-based Arab Fund for Economic Development, to a degree which makes America's post-war Marshall Plan almost insignificant by comparison. As a result countries like Algeria, although sorely smitten by the exodus of French capital and expertise which followed independence, now have an industrial growth rate of ten per cent per annum, and Syria is well on the Way to becoming self-sufficient both in oil and agricultural products. Most remarkable of all perhaps is the Sudan, where a twentyfive-year plan financed by the Kuwaitis is in Operation, designed eventually to make that country into the bread basket of the Middle East and North Africa. With the tropical southern regions now finally at peace this immensely fertile area is being harnessed, together with massive irrigation schemes in the arid north, to enable the Sudan to supply some forty per cent of the Arab world's requirements of grain and meat.

The underlying purpose of all this effOrt 15, of course, to make the Arab world as self-sufficient as its climate and geology will allow. For without self-sufficiency there can he no real economic independence. From the first stirrings of their political and cultural reawakening under Ottoman rule in

the mid-nineteenth century, it took the Arabs about a hundred years to achieve full political emancipation and eliminate British and French tutelage. Judged by their progress over the past twenty-five years, and despite the handicaps imposed on them by the continuing conflict with Israel, they may well achieve economic independence in half that time. And when they do so they will assuredly form a power bloc second only to the superpowers in wealth and influence.