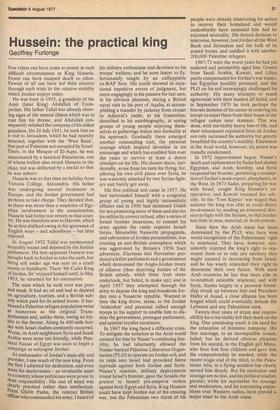 Few rulers can have come to power in such difficult circumstances as King Hussein. Fewer can have escaped death so often. Fewest of all can have led their country through such trials to the relative stability which Jordan enjoys today.

He was born in 1935, a grandson of the Amir (later King) Abdullah of Transjordan. His father Tallal was already showing signs of the mental illness which was to cost him his throne, and Abdullah consequently relished the company of his eldest grandson. On 20 July 1951, he took him on a visit to Jerusalem, which he had recently annexed, together with the 'West Bank', that part of Palestine not occupied by Israel. There, in the Mosque of El-Aqsa, he was assassinated by a fanatical Palestinian, one of whose bullets also struck Hussein in the chest, but was deflected by a medal so that he was unhurt.

Hussein was at that time on holiday from Victoria College, Alexandria. His father was .undergoing mental treatment in Europe, and the Jordan government had perforce to take charge. They decided that, as there was more than a suspicion of Egyptian involvement in the assassination, Hussein had better not return to that country. He was therefore sent to Harrow, which he at first disliked owing to his ignorance of English ways — and schoolboys — but later enjoyed.

In August 1952 Tallal was pronounced Incurably insane and deposed by the Jordan parliament. His heir-apparent Hussein was brought back to Jordan to take the oath, but being still under age was sent on a crash Course to Sandhurst. There `Mr Cadet King of Jordan, Sir' enjoyed himself until, in May 1953, he returned for his coronation.

The state which he took over was poor and weak. It had no oil and had to depend On agriculture, tourism, and a British subsidy which paid for its armed forces. It harboured a Palestine refugee population twice as numerous as the original TransJordanians and, unlike them, owing no loyalty to the throne. Along its 400-mile border with Israel clashes constantly occurred. Worse, its Arab neighbours Syria and Saudi Arabia were none too friendly, while President Nasser of Egypt was soon to begin a campaign to subjugate Jordan.

As ambassador of Jordan's main ally and provider, I saw much of the new king. From the first I admired his dedication, and even more his decisiveness — an invaluable asset to a country whose politicians were prone to Shun responsibility. His cast of mind was Clearly practical rather than intellectual. 1ro.111 Glubb Pasha, the veteran British Officer who commanded his army, I heard of

his military enthusiasm and devotion to his troops' welfare; and he soon learnt to fly, fortunately taught by an unflappable ex-RAF Scot. His youth showed in occasional impulsive errors of judgment, but more engagingly in his passion for fast cars; in his obvious pleasure, during a British naval visit to his port of Aqaba, at accomplishing a transfer by jackstay from cruiser to Admiral's yacht; at his frustration, described in his autobiography, at seeing groups of young people enjoying themselves at gatherings freeze into formality at his approach. Gradually there emerged another outstanding trait, the personal courage which inspired devotion in his entourage and which has enabled him over the years to survive at least a dozen attempts on his life. His closest shave, incidentally, arose from his taste for flying: for, piloting his own civil plane over Syria, he was wantonly attacked by two Syrian fighters and barely got away.

His first political test came in 1957. He had surrounded himself with a congenial group of young and highly nationalistic officers and in 1956 had dismissed Glubb for not promoting more of them and also for his militarily correct refusal, after a series of Israeli frontier incursions, to commit his army against the vastly superior Israeli forces. Meanwhile Nasserite propaganda, and subversion of Jordan personalities, was creating an anti-British atmosphere which was aggravated by Britain's 1956 Suez adventure. Elections that November produced a leftist parliament and a government which denounced the Anglo-Jordan treaty of alliance (thus depriving Jordan of the British subsidy, which three Arab states undertook, but failed, to make up); and in April 1957 they attempted through the army to depose the king and transform Jordan into a Nasserite republic. Warned in time the king drove, alone, to the Jordan 'Aldershot' and personal rallied enough troops to his support to enable him to dismiss the government, prorogue parliament, and appoint loyalist successors.

In 1967 the king faced a different crisis. To mitigate the isolation in the Arab world created for him by Nasser's continuing hostility, he had reluctantly allowed the Nasser-backed Palestine Liberation Organisation (PLO) to operate on Jordan soil, and its raids into Israel had provoked fierce reprisals against both Jordan and Syria. Nasser's reaction, military deployments round Israel's frontier, gave the Israelis the pretext to launch pre-emptive strikes against both Egypt and Syria. King Hussein could have kept Jordan out of the ensuing war, but the Palestinian two thirds of his people were already clamouring for action to recover their homeland and would undoubtedly have unseated him had he enjoined neutrality. His forced decision to intervene, however, lost Jordan all the West Bank and Jerusalem and the bulk of its armed forces, and saddled it with another 200,000 Palestine refugees.

1967-72 were the worst years he had yet endured and perceptibly aged him. Grants from Saudi Arabia, Kuwait, and Libya partly compensated for Jordan's war losses; but Egyptian hostility persisted, and the PLO on his soil increasingly challenged his authority. His many attempts to reach agreement with their leaders all failed, and in September 1970 he took perhaps the bravest decision of his career in ordering his troops to expel them from their bases in the refugee camps near Amman. This was done, with inevitably heavy loss of life, and their subsequent expulsion from all Jordan not only increased his authority but greatly benefited the country's stability. Elsewhere in the Arab world, however, his action was roundly condemned. In 1972 improvement began. Nasser's death and replacement by Sadat had abated Egyptian, and Arab, hostility, and Syria reopened her frontier, permitting a resumption of Jordan's main export, phosphates, to the West. In 1973 Sadat, preparing for war with Israel, sought King Hussein's cooperation; and Kuwait resumed her subsidy. In the 'Yom Kippur' war waged that autumn the king was able to avoid direct involvement by sending an armoured division to fight with the Syrians, so that Jordan lost little in men, material, or Arab esteem.

Since then the Arab scene has been dominated by the PLO, who have won world recognition of the Palestinians' right to statehood. They have, however, consistently rejected the king's right to represent them or to rule any territory they might succeed in recovering from Israel, and he has wisely conceded their right to determine their own future. With most Arab countries he has thus been able to re-establish amicable relations; and with Syria, thanks largely to a personal friendship struck up between him and President Hafez al Assad, a close alliance has been forged which could eventually include the Lebanon and any Palestinian state.

Twenty-four years of strain and responsibility have inevitably left their mark on the king. One continuing result is his need for the relaxation of feminine company. His first marriage, to an incompatible cousin, failed; but he derived obvious pleasure from his second, to the English girl Muna, who bore him four children and gave him the companionship he needed; while the recent tragic end of the third, to the Palestinian Alia, in a flying accident has clearly moved him deeply. But his resolution and courage are no less, and his political wisdom greater; while his reputation for courage and moderation, and his convincing expositions over Western radios, have proved a major asset to the Arab cause.