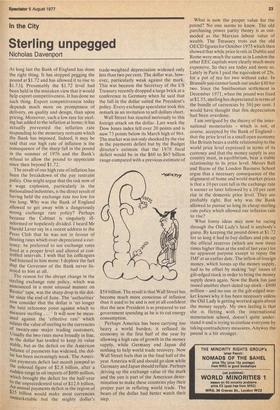 At long last the Bank of England has done the right thing. It has stopped pegging the pound at $1.72 and has allowed it to rise to $1.731 Presumably the $1.72 level had been held in the mistaken view that it would help export competitiveness. It has done no guch thing. Export competitiveness today depends much more on promptness of delivery, on quality and design, than upon pricing. Moreover, such a low rate for sterling has added to the inflation at home; it has actually prevented the inflation ,rate responding to the monetary restraint which the Bank has imposed. Indeed, it may be said that our high rate of inflation is the consequence of the sharp fall in the pound in the summer of 1976 and the Bank's refusal to allow the pound to appreciate since then beyond $1.72.

The result of our high rate of inflation has been the breakdown of the pay restraint Policy. One might argue that the risk now of a wage explosion, particularly in the nationalised industries, is the direct result of having held the exchange rate too low for too long. Why was the Bank of England allowed to get away with a dangerously wrong exchange rate policy? Perhaps because the Cabinet is singularly illinformed or hopelessly divided. I heard Mr Harold Lever say in a recent address to the Press Club that he was not in favour of floating rates which over-depreciated a currency: he preferred to see exchange rates fixed at a proper level and altered at controlled intervals. I wish that his colleagues had listened to him more: I deplore the fact that the Governor of the Bank never listened to him at all.

The reason for the abrupt change in the sterling exchange rate policy, which was announced in a most unusual manner on Reuter' tape, was the sharp drop in the dollar since the end of June. The 'authorities' now consider that the dollar is 'no longer the best reference point against which to Measure sterling . . . ' It will now be measured against the 'effective rate' which relates the value of sterling to the currencies of twenty-one major trading customers. Usually the two rates move broadly in line, as the dollar has tended to keep its value stable, but as the deficit on the American balance of payments has widened, the dollar has been increasingly weak. The American payments deficit last month jumped to the colossal figure of $2.8 billion, after a sudden surge in oil imports of $800 million, Which brought the deficit for the half-year to the unprecedented total of $12.6 billion. An annual payments deficit in the region of $25 billion would make most currencies unmarketable but the mighty dollar's

trade-weighted depreciation widened only less than two per cent. The dollar was, however, particularly weak against the mark. This was because the Secretary of the US Treasury recently dropped a large brick at a conference in Germany when he said that the fall. in the dollar suited the President's policy. Every exchange speculator took this remark as an invitation to sell dollars short.

Wall Street has reacted nervously to this foreign attack on the dollar. Last week the Dow Jones index fell over 20 points and is now 73 points below its March high of 964. The market was not only shocked by the rise in the payments deficit but by the Budget director's estimate that the 1978 fiscal deficit would be in the $60 to $65 billion range compared with a previous estimate of $58 billion. The result is that Wall Street has become much more conscious of inflation' than it used to be and is not at all confident that the new President is as prepared to cut government spending as he is to cut energy consumption.

Perhaps America has been carrying too heavy a world burden; it reflated its economy in the first half of the year by allowing a high rate of growth in the money supply, while Germany and Japan did nothing to help world trade recovery. Now Wall Street feels that in the final half of the year America will and should go slow while Germany and Japan should reflate. Perhaps driving up the exchange value of the mark and the yen is part of the American determination to make these countries play their proper part in reflating world trade. The bears of the dollar had better watch their step. What is now the proper value for the pound? No one seems to know. The old purchasing power parity theory is as outmoded as the Marxian labour value of wealth. The Treasury trots out the old OECD figures for October 1975 which then ' showed that while price levels in Dublin and Rome were much the same as in London the other EEC capitals were clearly much more expensive. So they are today and more so. Lately in Paris I paid the equivalent of 25s. for a pot of tea for two without cake. In Brussels you cannot lunch out under £40 for two. Since the Smithsonian settlenient in December 1971, when the pound was fixed at $2.55, sterling has depreciated in terms of the bundle of currencies by 381 per cent. I would have thought that this depreciation had been overdone.

I am intrigued by the theory of the international monetarists — which is not, of course, accepted by the Bank of England — that the price level in a small open economy like Britain bears a stable relationship to the world price level expressed in terms of its currency and that the money supply in any country must, in equilibrium, bear a stable relationship to its price level. Messrs Ball and Burns of the London Business School argue that a necessary consequence of the alignment of home and world market prices is that a 10 per cent fall in the exchange rate is sooner or later followed by a 10 per cent rise in the domestic price level. They are probably right. But why was the Bank allowed to pursue so long its cheap sterling rate policy which allowed our inflation rite to rise?

What funny ideas may now be racing through the Old Lady's head is anybody's guess. By keeping the pound down at $1.72 for so long it had to buy dollars and pile up the official reserves (which are now three times higher than at the end of last year) for no apparent purpose except to repay the IMF at an earlier date. The inflow of foreign money, which forces up the money supply, had to be offset by making 'tap' issues of gilt-edged stock in order to bring the money supply down again. Now the Bank has just issued another short-dated tap stock —£800 million — and no one in the gilt-edged market knows why it has been necessary unless the Old Lady is getting worried again about the money supply. My own feeling is that she is flirting with the international monetarism school, doesn't quite understand it and is trying to confuse everyone by taking contradictory measures. Anyway the pound is a bit stronger.